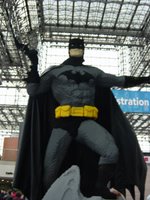 At last,I get to talk about the ComicCon last Saturday-Little Sister was amazed at how big the Javits was(she took all the pictures posted here,btw and I thank her most kindly for her assistence)and it was a miracle that we actually managed to stay together with the major mob scene action all around us. Yes,it was crowded-how crowded was it? You could find more elbow room in a can of sardines,for starters. Part of the probelm was in getting into the main display room-the two escalators right up front were set aside for "exhibitors only" use and for anyone else to enter,you had to walk over to the other side of the building and stand on a line that went in via a roundabout fashion. The bottlenecking alone caused many delays(not to mention that we missed the Kevin Smith signing due to a twenty minute wait to reenter). 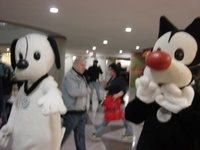 Despite the hassles,we did have fun. The highlight of the show for us was a talk given by Patrick McDonnell,the creator of Mutts and his website team. Patrick's not a computer guy so he was lucky to have one of his neighbors,Rich Mansfield, convince him that a website would be a good idea. Patrick talked about the goals of both his strip and the website,which has many links to his favorite causes and upcmoing projects,like his new kid's book ART(due out in the spring).

Seems that Patrick recieved a four children's book deal from Time Warner(which gives me renewed hope for children's picture books-this is the kind of person who should be encouraged here,not Madonna or some sitcom star recycling a stand-up routine)and The Gift of Nothing,released last fall,was the first one. Mutts merchandise is sold at the website and the group assembled where shown a preview of a set of Mutts figurines(Earl,Mooch,Guard Dog and Stinky)that'll be available for ordering soon. Patrick confessed to being a bit"Bill Watterson" about having Mutts items at first but they are made with natural materials and a portion of the profits are donated to various animal protection charities. You can even get a Lil' Pink Sock catnip toy for your kitty!

I've met Patrick before at the last BEA I went to and he was just as nice then as he was now. Also,his website staff was very sweet(I particularly appreciated two of the ladies pointing out Little Sister,who was trying hard to ask her questions about getting a strip syndicated,to Patrick during the Q&A/Drawing session). Due to the hectic scene on the main floor,Patrick signed books after the talk right in the conference room before making his way thru to the King Features booth. If you want to check out the Mutts site,just click the link in the title above.

As for the rest of the show,my sister did get to meet Kane and have a See No Evil poster signed. I wound up buying a signed DVD of "Jay and Silent Bob Do DeGrassi:the Next Generation"(hey,it was one I didn't already have,plus I like DeGrassi:TNG)and increasing my Buffy collection with a Palz Angel figure and a Sideshow Collectible Subway Spike. There was a Sideshow one eyed Xander but I'm more of a villian fangirl. 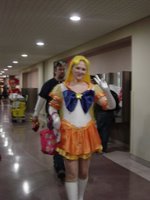 Hopefully,the next ComicCon will not be so crammed and we'll get to see and do more. The best thing about it was the fanlove;folks who truly enjoy the art of comics and animation sharing space and some good times. We need more of that kind of bonding in this world and fandoms need to do more than be seen as the gathering of outsiders. There were people from all walks of life and ages,which proves that art doesn't have to be just for museums but can be appreciated anywhere,even in your friendly neighbohood comic book store.
Posted by lady t at 10:53 AM