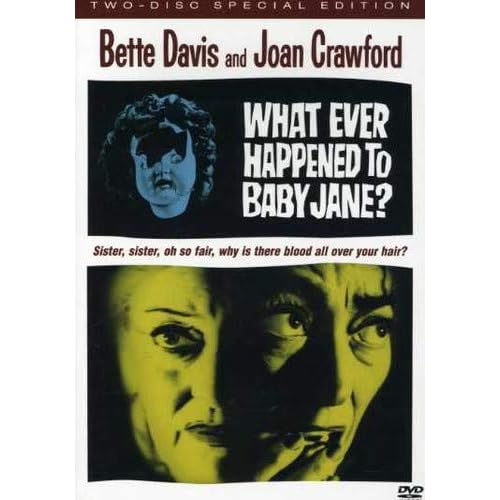 Along with picking up Mommie Dearest:Hollywood Royalty Edition(which has a great write-up at Now,A Warning??!),I added this little gem to my DVD library-a two disc
edition of Whatever Happened to Baby Jane? This horror movie hook-up of Bette Davis and Joan Crawford,two of the most ambitious and bitter rivals of the old school studio Hollywood system,is one of those you-gotta-see-it-to-believe-it deals. It also marks the beginning of the trend of starring grand old dames in cheese ball fright films such as Hush,Hush Sweet Charlotte(Davis again,with Olivia DeHavillard)and Who Slew Auntie Roo(Shelley Winters)


The plot of the story is about two showbiz sisters;Baby Jane Hudson,a former spoiled child star who never had the talent to make it on her own when she grew up(in the early scenes when we see the childhood version of BJ,I had Jon Benet flashbacks)and her older sister Blanche,who came into her own fame as an adult actress. Blanche's career was cut short by a car accident which left her crippled and BJ being blamed for it.

Years later,the gals are still sharing a household but Blanche plans to move out and have her crazy,drunken sister sent off to an asylum. However wacky BJ might be,she's not totally out of it. BJ plots to revive her old career and keeps sister Blanche a prisoner with such charming torments as serving up dead pets and pests for dinner.

Both ladies go to town with these parts-Crawford was well known for playing long suffering victims at that point and Davis was always a bold and brash type. It's no secret that they had quite a feud going so that extra bit of tension enhances the characterizations nicely. Davis recieved an Oscar nomination for Best Actress that year but lost out(she always claimed Crawford blackballed her) and you can see why.

In her portrayal of Baby Jane,Davis is not just a one note performer. Her character sways from a cold,convinning plotter to lost little girl in the blink of an eye. At times,you can't help but root for her. Some compared her performance to Gloria Swanson's in Sunset Boulevard and I think it's similar but SW had a way better script and style.


The extras include a commentary by Charles Busch and John"Lypsinka"Epperson(who also
appear on the Mommie Dearest DVD)and several featurettes,the best of which is "Bette and Joan:Blind Ambition" which chronicles their careers together. Bette Davis is featured solo in the "All About Bette" doc that's narrated by Jodie Foster and Joan Crawford is highlighted in an old BBC profile that includes an interview with her(all the better to avoid the whole MD deal,I suspect). The funkiest extra is a clip from the Andy Williams show in 1962,where Bette,clad in a icy blue glittery gown,sings the theme song to WEHTBJ as cheerful as cheerful can be.

If you haven't seen this movie,this is a great way to do so and if you're already a fan,you must own this set as soon may be(click the title link for more info). When you see a story like this,with two big league stars slugging it out for screen time,you wonder if any of the gals we have today could compete with the likes of Joan and Bette in the hokiest of flicks. Will we one day see Sandra Bullock and Julie Roberts duke it out in a gothic horror show or even Susan Sarandon and Meryl Streep have a big screen schoolyard showdown? Time will tell,folks.
Posted by lady t at 10:07 AM

Another fun movie in that genre is "Lady in a Cage", with Olivia De Havilland. Lots of guilty fun.

I keep getting the song from the Andy Williams featurette stuck in my head, and I have been wandering around my office singing it from time to time. No one has complained yet, but I'm sure it's coming...

I only wish Busch and Lypsinka had prepared more. As I listened to their commentary, I kept yelling at the tv screen when they'd get some factoid wrong. (For instance, Baby Jane's wig was originally used by Joan Crawford in a silent role in 1925's 'Pretty Ladies'. WHY wouldn't they know this?)

Also fun because it's so bad: The early 90's tv movie remake of Baby Jane, starring the Redgrave sisters. Lynn was Baby Jane (oddly, in Raggedy Ann makeup), and Vanessa was Blanche. Dreadful, but you can't take your eyes off of it.

P.S.- You may already know this, but Hush Hush Sweet Charlotte was originally intended to be a post-Baby Jane reteaming of Crawford and Davis. In fact, the original title was "Whatever Happened to Cousin Charlotte", but Davis threw a fit over the cheesiness of that name.

Anyway, they actually started filming with Joan and Bette, but Bette was (allegedly) so mean to Joan that she "took sick" and hung out in a hospital room until she got the news that she'd been replaced by Olivia de Havilland. This movie would have been SO MUCH MORE FUN with Joan in the role, if only because her character gets to slap Bette's Cousin Charlotte character.

Here's a publicity picture from Charlotte showing Joan and Bette in the roles:

Thanks for the picture! I just set it as wallpaper(which will urk Little Sister but that's what family's for,right?).

I do remember a story about Bette and Joan's feud on the set of BJ,where Bette had Coca-Cola machines put in for the cast and crew,knowing full well that Joan was hitched to Pepsi magnate,Alfred Steele. Pretty pricey way to piss someone off!

I did listen to the John Waters' commentary on Mommie Dearest and he was fun,despite being slightly repetitive at times. I usually avoid the commentaries because I don't want to miss key lines,like"But YOU ARE,Blanche,You ARE!"