A new Marvel on the superhero scene,The Guiding Light!

Just when you think soap opera storylines couldn't get any stranger,the bar is lifted to new heights. Tomorrow,there will be a new superheroine in town and her name is Guiding Light. Yes,just like the long running CBS show-the character Harley Davidson Cooper will have a little mishap that grants her superpowers and gets her clad in spandex. Here's a preview: 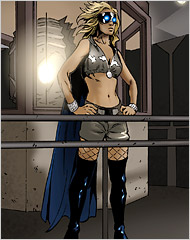 Marvel Comics is onboard with this( GL's costume designer created the wedding dress for Storm,the regal X-Men character,who was married to Black Panther in July)and they're putting out an 8 page comic book to tie in with this new supersudsy plot.Sounds like fun for both superhero and soap opera folk-too bad I've never watched GL before. Like many women,when I did watch soaps on TV,the ones I got into were the ones my mom watched and we were pretty much NBC folk.

I really liked Days of Our Lives(particularly during the whole Marlena/Roman love story)but wasn't watching the show when they did such fun things as having Marlena demonically possessed,on Christmas Eve of all days!:

The reigning champion of daytime drama bizarre is Passions,with it's infamous Tabitha and Timmy. Even after Timmy's departure from the show(due to the untimely death of the actor who played him),Passions is still delievering the wacky,with Tabitha having a daughter named Endora who decides to conjure up a mermaid to add to the show's romantic mix:

It's fun to see soap operas depart from the usual blackmail/secret lover/unrequited love stories and dive into the weird side of the pop culture pool. I hope that the new Marvel/GL creation does well and adds some zest to the show-wonder if they'll make an action figure of Guiding Light? That would make a nice collectable.
Posted by lady t at 11:00 AM

John Black and The Brow Arch.