Oscar,Oscar! The nominations are here! 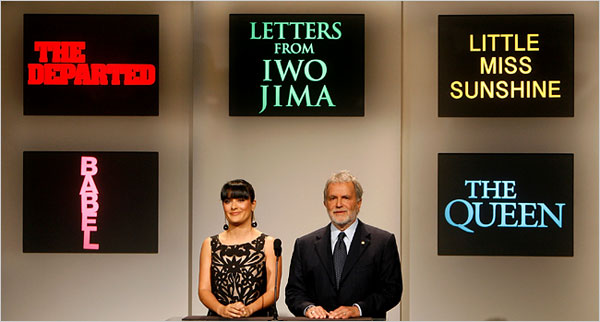 Yes,true believers,I was up early this morn to hear firsthand the nominations for this year's Academy Awards. Salma Hayek did the honors with the President of the Academy and it was lovely to see her get excited that her good buddy Penelope Cruz was a Best Actress contender. Quite a few surprises and some "See,I told you!" moments here,so let's look at the good,the bad and the "what were they thinking?" 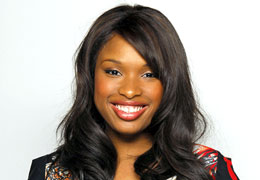 Forest Whitaker getting a nod for Last King of Scotland was expected as well as Leo DiCaprio being a nominee but not for Blood Diamond! Hollywood really seems to like that movie(it looked like a big social cause soapbox flick to me),since Dijmon Hounsou got a Best Supporting nom for it as well. Helen Mirren and Meryl Streep will battle it out for Best Actress,with Mirren being the arthouse favorite. Jennifer Hudson and Eddie Murphy are both rocking the Best Supporting sections for Dreamgirls but not Beyonce or Jamie Fox. Dreamgirls does have 8 nominations,three of which are for Best Song. I was hoping that"Love You,I Do" would be showcased along with "Listen" and someone must have heard me because both of them are.

Martin Scorsese is up as director for The Departed and maybe the movie gods will smile down upon him for a win. The list of nominess for Best Animated Film are the same as the list for the Golden Globes:Happy Feet,Cars and Monster House.

While Dreamgirls has the most nominations,it is not up for Best Picture or Director! It didn't even get Best Adapted Screenplay and that seemed like a no brainer to me. Jack Nicholson also looked like a shoo-in for Best Supporting for The Departed but Marky Mark Wahlberg is in his place instead.

Pan's Labyrinth,the beautiful fable of a film by Guillermo Del Toro,not only recieved a Best Foreign Film nom but also a few others: Best Original Screenplay, Best Art Direction,Best Score,Best Cinematography and Best Makeup. I saw PL over the weekend and it deserves every single one of these honors,plus more. It's a moving tribute to finding hope in the midst of horror. The visual styling of this film is like a cross between Jim Henson's Dark Crystal and a Chronicles of Narnia book:


United 93 managed to get a Best Director nod for Paul Greenglass and Apopcalypto scared up some Sound noms along with a Best Make-up. Ryan Gosling's much praised performance in Half Nelson was a bit of a long shot for Best Actor but he made it.

Alan Arkin is a Best Supporting Actor nominee and the only adult star of the film to get Oscar credit(Abigail Breslin is up for Best Supporting Actress). Superman Returns has a Best Visual Effects nom,which means we'll be seeing that shot of Brandon Routh saving the airplane with Lois trapped onboard yet again. It would've been nice if Emily Blunt had gotten recognization for her work in The Devil Wears Prada and if the Snakes on a Plane theme were to be sung at the Kodak Theater. Alas,it was not meant to be! It certainly would've been sweet if Sacha Baron Cohen had gotten a Best Actor nom for Borat(he'll have to make do with Best Adapted Screenplay). Bill Condon deserved to be mentioned for Dreamgirls and why DG is not a Best Picture contender,I can't figure it out for the life of me. Guess folks either love Babel more or decided that Little Miss Sunshine was the token commerical choice this year.

Little Miss Sunshine has quite a few noms-in addition to acting and Best Picture,it is also up for Original Screenplay. LMS is the Little Engine Who Could Steal The Show here,which would be very nice.

The Departed,The Queen and Babel have alot going for them too but I suspect that those films will get a few bones tossed to them but not any big sweeps.

The other songs nominated that were not in Dreamgirls are the Randy Newman song"Our Town" from Cars and Melissa Etheridge's musical contribution to An Inconvenient Truth called "I Need To Wake Up". So do I,because while I think Melissa's a great singer and songwriter,I can't believe a song from a tree hugging documentary got nominated!

Before you throw any non-threatening to the environment debris at me,hear me out: yes,global warming is a viable theory and I have no probelm with it being discussed in schools or anywhere else but I am not a big "save the trees" person. AIT will probaly get Best Documentary and that's fine with me. Best Song,however,is a whole other ball of wax there. If not SOAP,then the Borat movie's Kazakhstan anthem should've been up there. Take a listen to both tunes and you tell me which one would be more of a toe tapper on Oscar night:

If you want to see the rest of the nominations,please click the title link above. This year,Ellen DeGeneres will be our hostess for the Awards on February 25th. Good luck to her and all of the nominees!
Posted by lady t at 11:11 AM

I knew you would be on top of this Lady T. Kudos. I was stuck in a meeting during the nominations but had many of the same reactions you had. You try to explain these things to people but they don't seem to get it. The song catergory was a disappointment. No Brad Pitt?

BTW, I should be getting Snakes on a Plane today from Netflix.

Glad to be of service,PCD. Yeah,I was surprised that Brad Pitt wasn't up for Babel-he was getting plenty of critical cred for that. Perhaps it's Brangela backlash at work?

I'm expecting to get This Film Is Not Yet Rated from Netflix(appropiate for the start of Oscar season,isn't it?). SOAP is a fun popcorn flick,enjoy!

So sorry your choice for Best Song didn't make it. I know how much SOAP means to you.