This Valentine's Day,discover that Love Is a Mix Tape 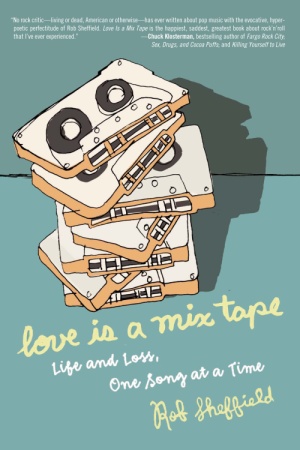 One of the most romantic and heartbreaking books I've ever read is Rob Sheffield's Love is a Mix Tape: Life and Loss,One Song at a time. Sheffield's a writer for Rolling Stone and has appeared on alot of those MTV/VH1 countdown shows,giving his mocking take on pop music hits. He's almost like a character out of a Nick Hornby novel,a passionate music fanboy who expresses his emotions best thru the making of mix tapes for friends and family.


Rob met up with Renee in the late 1980's and married her in 1991. Renee was his soul mate and polar opposite in many ways but the two of them shared an intense love for music. Renee was outgoing,hip and very much her own person. She was also a writer who did interviews with bands like L7:

The two of them hooked up together thru mutual appreciation of Big Star(Rob's first mix tape to Renee was really just a copy of their albums Sister Lovers and Radio City) and later on,they both fell in love with Pavement:

Unfortunately,like the David Bowie song,Rob and Renee only had five years together. Renee died suddenly,of a pulmonary embolism at the age of thirty-one. Part of the process of grieving for Rob was going over the many mix tapes the two of them made during their relationship. He also spent time going thru the motions of living his life alone,feeling like a faker by still wearing his wedding ring,eavesdropping on couples in public places to catch the rhythms of married people's conversations that he could no longer have with Renee and missed so much.

This may sound like a too sad to read book,but it's not at all. Sheffield doesn't shy away from the pain he went thru and still has alittle of,in his heart. His experiences as a widower are relatable,even to those who haven't experienced that kind of loss and even to those who have in different circumstances. I talked about LIAMT with my mother,who was married for nearly forty years and has been a widow for about four years this coming May. She totally agreed with the title,that love is a mix tape"it doesn't always run on the same groove."

Sheffield also talks about mix tapes and the many reasons folks put one together;to party with,take a road trip,impress a new friend/lover and do chores with. There's plenty of reminisces about the early 1990's,the trends and the impact of bands like Nirvana. The death of Kurt Cobain resonated on that generation strongly and Sheffield's take on "Heart Shaped Box" is interesting. HSB always stuck me as a damn strange song with morbid lyrics but Rob saw it as a young husband talking about his fears of being married and so devoted to one person. Certainly a new way to rethink that tune for me:

Love is a Mix Tape is a great love song to life and having the love of your life,even for a brief moment in time. It's also full of good memories and a touching tribute to a lady I wish that I had had the chance to have met. If you would like to know more about Rob's book,please click the title link above and check out the official LIAMT website. This is not only a wonderful read for Valentine's Day,it's one of the best books of the year. And like any decent mix tape,here's a finale song that hopefully wraps this review up well:

Your posts are mix tapes. I love all the combos you give us--so many I know and haven't thought of for years (like "Love is Like Oxygen"--too cool!), and all the new stuff I've never even heard of.

Aww,thanks,Robin! I learned some new stuff,too-"Love is like oxygen" was one of those songs I remember hearing on the radio but didn't the name of the band,which I know do,thanks to LIAMT!

Also got to hear more L7,a group I only knew from their appearance in the John Waters flick,Serial Mom. That part with them helping Kathleen Turner off one of her victims is a favorite scene of mine:)