It was Final Four time at Top Design and the decorator's challenge this week was to create a luxurious hotel room based on one of the four elements,earth,air,fire and water. I thought Goil's room was one of the best ones-he had Fire and really pulled together a viberant yet relaxing space that incorporated the theme without being overwhelmed by it.

The judges,however,were in love with Matt's room,which was Water. While he use the space well and his style had elegance,it really needed some more color. Matt said that to him,water was clear and that was what he was going for. Fine,but all that white puts me in mind of a high end hospital room,not a hotel. Some blues or green would've been a nice pop of color. Matt was declared the winner and since his carpenter nearly lost a finger cutting the boards for this challenge(the guy was okay after getting about 8 stitches and went right back to work),it made the victory extra sweet there.

When it came down to elimination,Andrea and Goil were on the chopping block. Andrea should have been the one to hear "see you later,decorator"(what a lame sign off that is)but Goil was given the boot instead. I call shenangans on that! Andrea hated the theme of her room(earth)and her design shows it;it's dull,unfocused and that stone bench with the patch of grass is uncomfortable and ridiculous! She could've gone with some rich autumn leaf colors or a forest glen feeling but no,Andrea slapped togther some drab colors and a literal interpretation that somehow got her into the Final Three.

In looking at the Judges' blogs at the Bravo website,Margaret Russell said that Goil wasn't"passionate about this room and it was his downfall." Not passionate about his room?! The guy threw a hell of alot effort and creativity into that design while being ignored and unencouraged by his fellow decorators. If anyone was not passionate about this challenge,it was Andrea,who kept bitching and moaning about how she was stuck with a theme and how she's not"crunchy". She's not that great a decorator from what I've seen on this show.

Carisa did a decent job on her room,making up for last week's diaster of a dining room but she still keeps fighting with her carpenter. Carisa,please-is it really a smart move to constantly tick off the guy who has full access to saws and hammers and can "accidently" drop heavy objects on your head?

Dirt wrapped up it's first season on Tuesday and while I've only been watching the last few episodes on and off,I figured that I might as well see how this thing ends. The best parts were poor Don Konkey's struggles in the desert to resist the urgings of his hallucinations to kill Lucy. Ian Hart is pretty damn cool,I hope he gets a better acting gig out of this.

Of course,most folks tuned in to see the big Courtney Cox/Jennifer Aniston kiss and that was pretty much a nonevent there. I've seen sexier smooches between two Barbie dolls in a grade school playroom. So dull:

I don't know if Dirt has been renewed for another season but they certainly followed the tradition of most of the successful F/X shows and went out with a hell of a cliffhanger,with Lucy bleeding to death after being knifed by Julia and calling Don to come over and take the pictures before calling 911. Great priorities there,hon! Maybe a second time around the block will pay off better,who knows. Gwen Stefani was the guest mentor on American Idol this week,giving the contestants a choice of either No Doubt songs or songs by those who have been an influence on her such as Donna Summer and The Police. Only three of the Top Ten dared to sing some of Gwen's tunes and yes,Sanjaya was one of them. I've been awarding crappy performances on AI this season with the Singalong Screwup award but I've given up with that and will simply call it the Sanjaya. That hair alone makes him a memorable piece of American Idol's history;that was the first time I've ever seen a hairdo get it's own closeup.

When he came out with that fauxhawk,it reminded me of a cartoon character with a similar bouncy hairstyle but a much better singer:

SANJAYA DROWNING IN THE BATHWATER

NO DOUBT ABOUT WHO CAN SING HERE

Sanjaya is safe yet again,while Chris Sligh was given the honor of singing the Song of Shame. It's a bummer but Chris Sligh seemed to have quite a bit of potential going into this competition but he didn't live up to that promise. Also,not keeping in sync with the band during the song is a big no-no. On the bright side,both Melinda and Lakisha rocked some sweet Donna Summer and Gina gave a great performance with Chrissie Hyde's "Stand by You". Let's take a look:

HEAVEN KNOWS HOW GREAT MELINDA IS 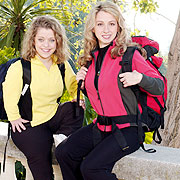 TAR/All-Stars: Charla and Mirna were Team Number One yet again while Teri and Ian were Philiminated. Uchenna and Joyce benefited from the airport madness on this leg which kept teams hours apart from the clues and challenges. I'm glad they're still in the race,altho I wish that Eric and Danielle were gone already. The two of them are too damn moody,plus Eric loves saying stupid things about his girlfriend's breasts or calling one of the other teams"two old queens." Nice,real nice! The Riches: Doug faked his way thur his first day of work as Dahlia conned the headmistress of the local snooty private school into accepting all three of her kids without that pesky waiting list business. I'm really liking this show and my favorite character is Sam,the youngest Malloy with the most potential for breaking out of the family criminal rut but may have to hide his tastes in girl's clothes to keep the current con going.

Also digging seeing some other actors from favorite shows of mine show up here,like Gilmore Girls' Gregg Henry as Doug's mental case boss and last week Kaitlin Olson,aka Sweet Dee from It's Always Sunny in Philadelphia popping in as a one armed,bitchy neighbor. Can't wait to see who will show up next!

Blood Ties: Mike has finally caught on to what kind of a guy Henry really is and thank goodness,he found out by the third episode. It would've been annoying if they had dragged out the whole"what does Vicki see in him?" thing for too long. If it was up to me,I'd go with Henry. He's sexy,charming and damn useful in a fight with supernatural forces. Oh,and he's a graphic novel artist to boot! Sweet. Watch this and tell me you don't agree:

I know it's a great ratings ploy but Sanjaya must leave. It's not even amusing anymore. The struggle, the bum notes, the hair, the vacant smile, the ignorant bliss. Enough.

I know,it's getting so silly. AI is slowly becoming the Sanjaya Sideshow at this point. Hopefully,he'll be voted off soon,so that we can focus on the better singers here like Lakisha,Melinda and Jordin.

Re: Top Decorator. I only started watching last week, when of course I got caught up in a marathon, and so now am hooked (that's how it always happens--you don't think they plan it that way, do you??). I DESPISE "See you later, decorator." It's EMBARRASSING! I mean for the judge to say. It's so stupid I had to start trying to mute the TV before I had to hear it. Yuck.

But I so liked Goil. I didn't see this week's episode yet, so I'm sorry to hear he had to go. Bummer. He seems so decent.

Bravo is slick with those marathons,I agree. Goil was so robbed,in my opinion. He was really treated like Jan Brady there:(

I think Carisa may be the next one to hear "See you later,Decorator!"(I wince just typing those words). She fights too much with her carpenter and has too many excuses about her designs to keep ahead of Matt and Andrea.