As many of you who read this blog on a somewhat regular basis know,I'm a bit of a horror movie fan and have a pretty strong stomach for certain things. I even enjoy lurid images,if done well and appreciate boldness. However,some of these marketing people are really testing my limits(Warning-some of these images are definately not work safe or kid safe-you have been warned).

Recently,two movies are freaking people out with teaser posters like this one for Hostel II,showing a nude body holding her own severed head under her arm(the actress is Bijou Phillips,who's in the movie). There are two versions of it,one that you see on the right and a much gorier one,for those who must have red wine with their meal:

And that's not all,folks! Billboard ads for the upcoming movie Captivity were pulled down,due to people being upset that their kids could see images of Elisa Cuthbert being held hostage in four fun parts ending with death. Take a gander,if you will: 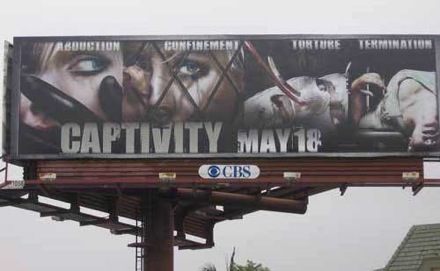 These ads went up on over 30 billboards in LA and 1,400 NYC taxicab tops. The producers claim that this was done in error but I don't know if I buy their"uh-oh,spaghetti-os!" line. The one sheet posters for Captivity are alittle more subtle,...well,one of them is,anyway. See for yourself:

Now,I'm not going with the"protect the kids!" line,especially since I'm usually the first person to call shenanagans on that one,nor am I going to whip out the feminista card here. My complaint is based on creativity. First impressions mean alot,folks and what are these ads telling us here? "Hey,wanna see something gross? We've got naked chicks,too!"

Smooth move,Clyde. Real smooth. These ads are nothing but shock and awe guerilla style tactics and yes,they'll put plenty of butts in multiplex seats to watch them on their opening weekends but is it too much to ask that you give your prospective audience a hint of what's to come,not give away the whole show for free?

"Aw,give me a break,Lady T! You like those posters for Grindhouse and Black Snake Moan-aren't those just as obvious?" No,not really. Those posters give you an idea about what to expect but are executed with more style and substance. They are homages to past images from dime novels and 1970's low budget exploitation films that have more heart and soul in them than some of the slick sleaze being made today. Just one look and you can tell that quality wins out: 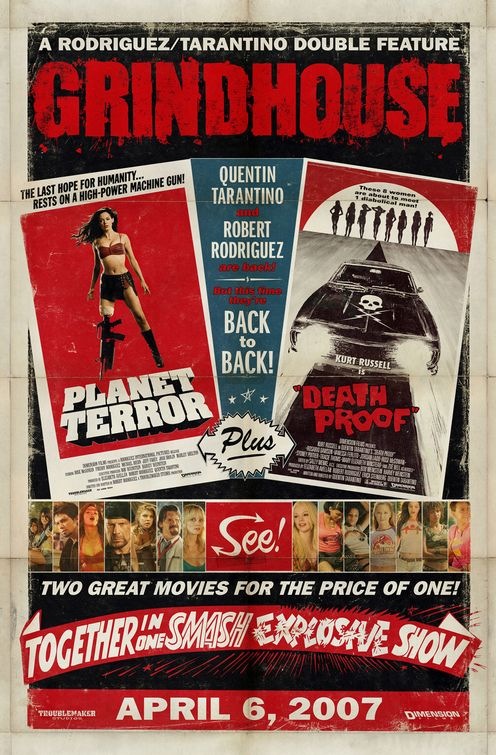 If you have low expectations for your audience,that's fine but I for one prefer a little more flash for my cash in the brains department. Good scary fun is great and alot of my favorite flicks are not highbrow. However, ads like these for Hostel II and Captivity leave a nasty taste in my mouth that's similar to swallowing my own vomit and I'd rather not rush out to see them in theaters. Maybe a rental but more likely watch them on cable,if there's nothing else on.

I know it's hard to think of new ways to advertise any movie,especially in this genre but it can be done with a little more flair and imagination. Think it about it,that's all I am asking of you.
Posted by lady t at 12:03 PM

Those posters are guh-ross. Really vile. Don't make me want to see those movies at all.

Whereas the one for Black Snake Moan is that over-the-top cheese that makes you wonder what on earth that movie could be about. And having seen it, I can say it's definitely as weird as the poster, and definitely worth everyone's time.

See,that's why I would definately check Black Snake Moan over either one of those movies,because there's some creative thought going on there!

Weird is cool but off putting is not. Too bad some people don't seem to notice the difference.

I'm with RB on this. These posters are not provacative as they are disgusting. I'm not much with the gore I too like brains in my horror