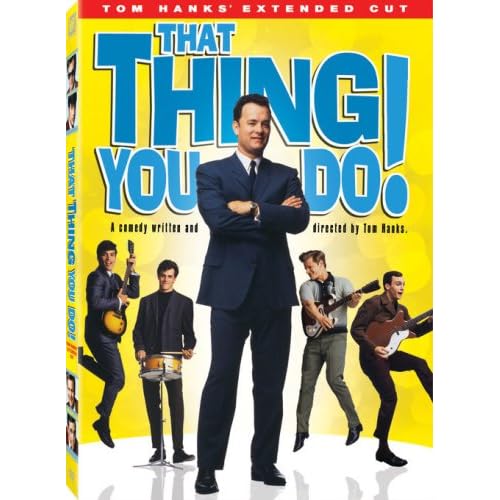 Recently,I got a chance to check out the special edition DVD of That Thing You Do!,which originally came out in 1996 and is best known for two things:Tom Hanks wrote and directed it(also cast himself in a key supporting role)and that the name of his production company,Playtone,came from this movie. I remember seeing TTYD when it was in theaters and it was a nice little film that showcased some great music ,so I was eager to see what had been done here.

The new edition is a two disc one,with the original cut of the movie and a expanded version both available for your viewing pleasure. The director's cut is about a half hour longer and while some of the extra scenes highlight more of Charlize Theron's character drifting further away from her boyfriend Guy(Tom Everett Scott)into the arms of a local hunky dentist,most of what's added isn't really neccessary. It's cool to have both versions available for compare and contrast,plus the letterboxing is sweet. I'm a sucker for widescreen and it is done well here.

The movie itself is a great tribute to the American music scene of the early sixties,when the British invasion was still just getting started and pop groups were encouraged to wear suits and ties as they performed. All of the music used was written for the film and a soundtrack album was released as well. I had a cassette single of a couple of the songs(back in Ye Olde Days before Ipods conquered the earth). They're really cool songs that feel so right:

It's also a good rise and fall story of a one hit wonder band,ironically named The Wonders(better than the "O-neders",in my opinion),who wind up being the hot new sensation in the music biz only to slowly fall apart at the seams before they can even record a full album. Part of the fun is watching the characters' growing excitement at their new found success,each step of the way:

Disc Two has a number of featurettes,including a reunion of some of actors in the film: Jonathan Schech,Tom Everett Scott,Charlize Theron,Ethan Embry and Steve Zahn. I wish Liv Tyler(who played Faye,the pivotal love interest in the movie)had been there along with Tom Hanks but it still is fun to see most of the old gang back together. They clearly had a blast making the movie and seeing all of them in grown up scruffy mode is amusing. Some of the featurettes are old(like HBO's First Look)but some are a mix of old and new footage,such as a look back at promoting TTYD in Japan. Diehard fans of the movie will appreciate these best.

So,is it worth it to add this DVD to your collection? In my opinion,you should do so if you don't already own a copy of TTYD and if you're a huge fan of the movie. Tom Hanks did a great job of creating a good visual story about something he truly loves and it's worth sharing with others. Up and coming musicians should take a few notes here about how fickle fame can be and being in the business because you love doing that thing you do:

I like TTYD. Their song was so catchy you can't help but sing along.