Harry Potter and the Reading Challenge 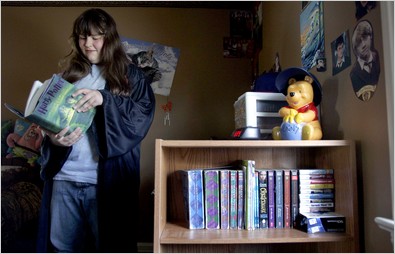 Today in the New York Times,Motoko Rich has a big article about the Harry Potter books entitled "Potter Has Limited Effect On Reading Habits". Sounds pretty harsh there,doesn't it? Oh,but it gets better,folks. The main theme of this little ditty is that,contary to "near mythology",the Harry Potter series has not increased the numbers of kids who keep on reading beyond their teens. According to federal stats, the rate of young people who lose the taste for books,with such distractions as video games and text messaging,is about the same as in the pre-Potter days.

To be fair,the article does point out that many folks in the education field are not placing all of their eggs in the Potter basket when it comes to encouraging kids to read(some of them don't even think that there should be a big push for fiction,that children"need to learn to read for information." That's true,but fiction makes reading abit more fun which is more of an incentive for most people.). Several of them point out that the Potter books are only a good stepping stone for some and that other books should be offered up to keep them on the literary path.

What bothers me about this write-up is the undertone of being sold false promises of kids across the land magically giving up gadgets and gizmos to become little scholars due to the word spell invoked by Rowling. Let me show you some examples:

"Of all the magical powers wielded by Harry Potter, perhaps none has cast a stronger spell than his supposed ability to transform the reading habits of young people. In what has become near mythology about the wildly popular series by J. K. Rowling, many parents, teachers, librarians and booksellers have credited it with inspiring a generation of kids to read for pleasure in a world dominated by instant messaging and music downloads.

And so it has, for many children. But in keeping with the intricately plotted novels themselves, the truth about Harry Potter and reading is not quite so straightforward a success story. Indeed, as the series draws to a much-lamented close, federal statistics show that the percentage of youngsters who read for fun continues to drop significantly as children get older, at almost exactly the same rate as before Harry Potter came along."

"But some researchers and educators say that the series, in the end, has not permanently tempted children to put down their Game Boys and curl up with a book instead. Some kids have found themselves daunted by the growing size of the books (“Sorcerer’s Stone” was 309 pages; “Deathly Hallows,” will be 784). Others say that Harry Potter does not have as much resonance as titles that more realistically reflect their daily lives. “The Harry Potter craze was a very positive thing for kids,” said Dana Gioia, chairman of the National Endowment for the Arts, who has reviewed statistics from federal and private sources that consistently show that children read less as they age. “It got millions of kids to read a long and reasonably complex series of books. The trouble is that one Harry Potter novel every few years is not enough to reverse the decline in reading.”

There's also qoutes from kids who love the books and yet are going on to different interests,such as hanging out with their friends to play Frisbee,playing outdoor sports and video games. I say this as a lifelong reader:what is so bad about that? What's wrong with having other interests in life? What's wrong with wanting to move on to other things? A good reader is well rounded and having an active social life or enjoying video games does not automatically oppose that at all. Plus,not everyone is meant to be a big reader. Just as some are not into sports but have a passing interest in a game or event from time to time,the same holds true for reading.

This also bothered me as well:

"Neema Avashia, Aaron’s(note,Aaron was one of the students qouted in the article) English teacher, said it was rare for the Harry Potter series to draw reluctant readers to books. “I try to have a lot of books in my library that reflect where kids are coming from,” Ms. Avashia said. “And Harry Potter isn’t really where my kids are coming from.” She noted that her class is 85 percent nonwhite, and Harry Potter has few characters that belong to a racial minority group."

It really peeves me this whole notion of putting people into sociological pop culture pigeonholes due to race,religion,where they live,etc. The best way to open up a person's horizons and give him/her a real insight into what's it is like to walk a mile in the shoes of another is reading. To me,telling someone that"You shouldn't be into that,it has nothing to do with the world you're expected to be in." is insulting to their intelligence and narrowing their options in life. In the real world,you are going to run into all kinds of folks with different cultural experiences and takes on life and wouldn't some early expose to the reality outside the one you've grown up in better prepare you for that?

Back to the main topic at hand,folks need to keep in mind that J. K. Rowling did not write these books to improve reading statistics,she wrote them to share her imagination and love of a good story with others. In that,she is an overwhelming success. I have no doubt that many of the people concerned about encouraging youngsters to develop a lifelong habit of reading truly have the best interest of the kids at heart but I'm afraid that they are many whose ultimate aim is to score high numbers in order to make themselves look good and polish up their egos with that reflected glory. To them I say this: It's not about the numbers. What matters in the long run is quality,not quantity.
Posted by lady t at 12:33 PM