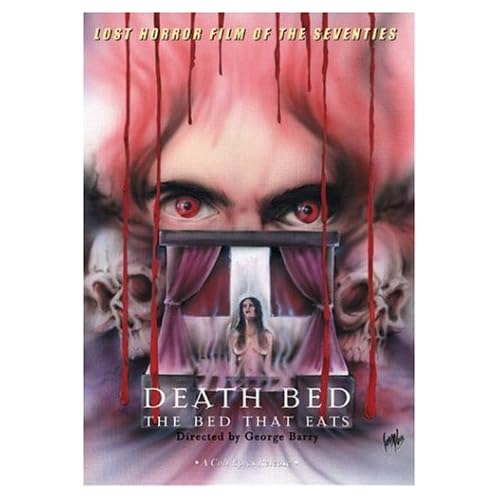 This being the first Friday of August,we officially begin Bad Movie Month with a truly rediscovered gem of a clunker,a film so bad that it took over twenty years for it to be released. Ladies and gentlemen,I give you Death Bed:The Bed That Eats(people!).

Written and directed by George Barry(who gives folks a very informative intro on the history of the film on the Cult Epics DVD),Death Bed tells the tale of a demon possessed bed that's all alone in an abandoned country estate with only the soul of a mopey artist trapped behind the painting(which is more like a drawing) of the bed itself. The unnamed artist is Our Narrator,who whines about how evil the bed is and wears the jewelry of it's victims(he even gets to smoke a cigarette left over from one of the devoured characters! Talk about your anti-smoking messages before it's time there).

We also find out the bed's backstory(which was given more thought than any of the actual human characters in the movie)-seems that a nature demon took a fancy to a young lady and decided to seduce her by taking human form and putting a giant four poster bed out in the middle of a field(what,no dinner and a movie first?). After their tryst,the young lady died and a few drops of her blood gave birth to our carnivorous sleeping chamber that foams orange soapy bubbles as it consumes it's prey. The eating foam resembles dish washing liquid mixed with Sunkist soda.

The movie is divided into four parts:Breakfast,Lunch,Dinner and tops off this sad menu with Just Desserts. A series of folks come across the Death Bed and wind up getting eaten,like the Breakfast couple who bring a bucket of chicken and a bottle of wine on their lovers' picnic,which DB gobbles up as an early bird appetizer. Death Bed is not a sloppy eater,however-it puts the chicken bones and apple cores right back in the bucket where they belong!

Death Bed is not above playing with it's food and likes to give nightmares to some of the intended targets,which makes them sweat like they're in a sauna(or a badly ventilated film set). The scary dreams wouldn't give Freddy Kruger any nightsweats however;the biggest one involves trying to make a girl eat a plate of squirming bugs. The scariest part of that dream is that the girl talks without moving her lips(maybe she should've taken up ventriloquism instead!).

The special effects in Death Bed would make any Ed Wood film look like it had a million dollar budget. At one point in the movie,a guy gets his hands stripped down to the bone in the Death Bed's clutches(without any attempt at showing much emotion,I might add)and spends the rest of the picture sitting around with fake skeleton hands that start to fall apart. That's almost as bad as the prolonged sequence in which one of the Dinner guests takes forever and a day to crawl away after having her legs nearly chomped off(the back of her jeans look as if she had just sat down in a puddle of ketchup),only to be dragged back to her doom by a bed sheet. 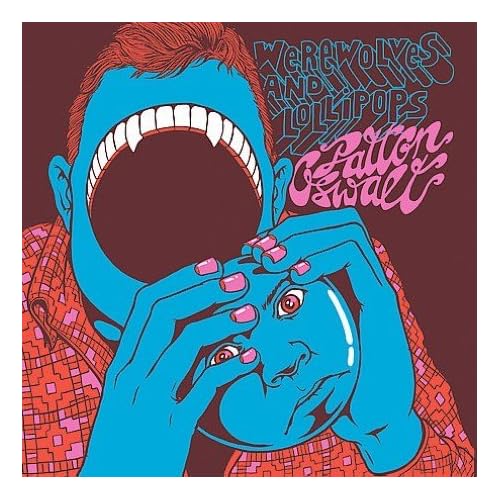 I must thank the brillant Patton Oswalt,who raves about this movie on his current comedy album,Werewolves and Lollipops. I'm not the only one who sort this movie out on Netflix(which had to find a copy for me all the way from Little Rock,Ark) after hearing his take on how Death Bed gives him the strength to keep on pitching movies to Hollywood. Death Bed doesn't have an official trailer(the film didn't get released in theaters in the US but a print was stolen and pirated overseas)but this is the nearest that I've come to one(thanks,YouTube!)

So,if you're looking for a film to mock that is perfect for talking loudly over with like minded friends,Death Bed:The Bed that eats is the porridge that Goldilocks chose. To cap this tribute off,let's listen to Patton Oswalt as he pays tribute to one of his favorite Hollywood icons,producer Robert Evans(very R-rated tribute at that,folks. You have been warned.):