Before I Die: a novel that should be on top of every reader's Must Do list 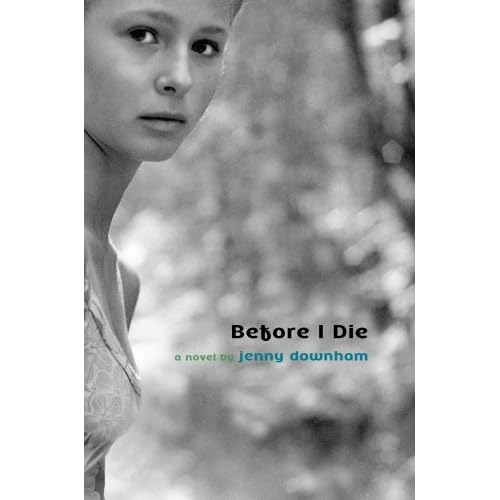 Jenny Downham's debut novel,Before I Die,introduces you to Tessa Scott,a sixteen going on seventeen year old girl,who is determined to complete her To Do Before I Die list. The first item of business is sex(done with a sort of "let's get this over with" vibe,courtesy of an anonymous hook-up at a club set up by her best friend,Zoey). Next is saying yes to everything that's offered to her for a whole day. Other challenges include drugs,breaking as many laws as possible in one day and falling in love.


Least you think that Tessa is some spoiled teen looking for thrills,know this: her BID list has a serious time limit. She's at the end of her four year long battle with acute lymphoblastic leukemia and wants to taste alittle bit of the life she knows that she won't get to be part of. Her father is not pleased with this whole idea,since he is still trying his best to keep Tessa alive which he's had to do on his own since Tessa's mother left after the leukemia was confirmed. Her younger brother Cal particularly enjoys Tessa's day of saying yes but usually acts like the typical sibling who's annoyed at all of the attention the other one gets,while sharing the concerns about her health with their dad.

Tessa does fall in love,literally with the boy next door. His name is Adam and he and his mother recently moved into the neighborhood as part of coping with the sudden death of his father. Zoey winds up falling in love herself and having to deal with an unexpected pregnancy,which puts some extra strain on her friendship with Tessa.

This does sound like an incredibly sad story for anyone to read,but the beauty of it is that Jenny Downham refuses to resort to tear wringing tactics or gothy gloom and doom romantizing of the concept. Instead,she pays her characters the respect they deserve,by writing about them in a realistically moving way. The Scott family and their circle of friends are not picture perfect people-they fight,make foolish mistakes and yet try to make the best of things in the face of true despair.

That description also applies to Tessa,who Downham portraits as neither a wide eyed waif or a rightfully so miserable mess. She's given all of the emotional dimensions that any real girl her age has,illness or not,and the different phrases of her humanity as she gets closer and closer to the end of her time on earth is rendered as a hauntingly vibrant melody that insists upon been sung to it's very last note.

Yes, this book will be in the teen section of your local bookstore(official release date is September 25) but like such other brilliantly written crossover titles as The Curious Incident of the Dog in the Night Time and Life of Pi,Before I Die should make it's way up front soon enought for all to see. If you are putting together a list of Must Reads for this season(or even if you are not),BID should be right smack on the very top of it. This is one of the most amazing debuts of the year and missing out on this book of wonders will be more heartbreaking than you will ever know.
Posted by lady t at 9:47 AM

"Before I Die" by Jenny Downham and another newcomer to the fiction scene, Susan Alvis with her "Friends Unlikely" have made a profound difference on my life.

Downham, obviously carrying the bigger imprint should make the number one spot on a lot of best seller lists but in my opinion, Alvis should be right behind her with a close second. Kudos for the article.