Identical Strangers gives you a dose of double happiness 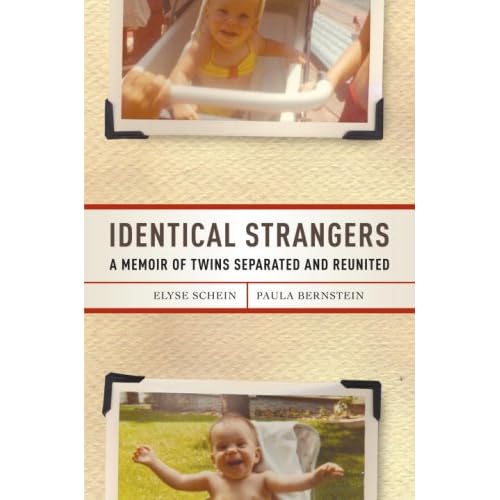 This is the true story of two women,Elyse Schein and Paula Bernstern,who ,on paper, seem to be a pair of ladies that normally wouldn't run into each other in the daily course of the lives. Elyse lives in Paris,where she writes about film and has been involved in making a couple of film shorts,one of which was featured at the Telluride Film Festival.

Paula also writes about film,for such publications as The Village Voice and Redbook amongst others and was a reporter for Variety as well as a CNN contributor. Paula lives in Park Slope,with her daughter and husband,while Elyse has never been married.

So,how did their paths cross? Elyse is an adopted child and in her mid thirties,decided to get some information about her biological mother. On one of the follow-up calls from the agency who handled her case,Elyse learned something that she never even considered to be a possibility-that she has an identical twin sister.

Her twin is Paula and the tale of these two reunited sisters is told in tandem in their memoir Indentical Strangers:A Memoir of Twins Separated and Reunited. Elyse and Paula not only face their mixture of joy and anxiety about finding each other but also team up to uncover the reason behind their separation which is a story that affects more than themselves.

It turns out that the reason the girls were divided from each other as part of a psychological experiment being run out of the Louise Wise agency that also separated a number of other twins and triplets.

The adoptive parents were not told that the child they were given was a twin but were told that a "child development" study was being done and that they needed to allow researchers to visit the home and even film their child over the years. Since this was done before any disclosure laws were written,many of the families complied with this and were ignorant of their adopted child's other half.


Even tho Elyse and Paula were not full particpants in this study(due to one girl developing faster than the other in infancy),they were still placed with different families that were not told or given the option of taking both of the twins. Both ladies suffered from bouts of depression over the years,which motivated Elyse to find out more about her birth mother,and in trying to get to the real reason behind this experiment,it is a strong possibility that this research was meant to gauge the inheritability of schizophrenia,which their biological mother may have had.

Apart from the mystery behind the intent of the study(most of the research has been donated to educational institutions such as Yale and not to be released until late in this century,even to those who were test subjects)and finding out who their birth mother was,it's the emotional journey that both women take here that is the driving force of this book. The honesty of both sisters who are,at times,conflicted over how they are supposed to relate to one another and on the best course of action to take while persuing the truth about their origins,is boldly admirable. It's hard enough to be open about your feelings with and about a sibling on a one to one basis,let alone to write about it for all the world to see. Ladies,I sincerely salute you.


Identical Strangers is told in two very distinct voices that refuse to sugarcoat raw emotions and provides the reader with loads of interesting info regarding the known facts and theories surrounding twins over time. It's also a wonderfully moving true life story about family,identity and feeling like a completed person. This book is out and about now and a better duel narrative will be hard to find,in my opinion. No matter what place you hold on your family tree,Identical Strangers highlights the strong roots that keep a good one going.
Posted by lady t at 11:22 AM

Thanks for your support!
You can read more about the book at
www.identicalstrangersbook.com
Best,
Paula and Elyse