They don't make music critics like they used to 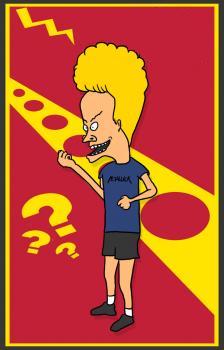 I'm feeling a tad nostaglic for the old Beavis and Butthead show that,for awhile,reigned supreme on MTV. The rudely goofy animated antics of those two boys were always alot funnier to me than Ren and Stimpy ever was(I never understood what the appeal of that show was. Yes, the artwork was good but the humor was too surreal for my taste)and frankly,it makes most of the live action programming on MTV today look pitiful in comparison. Who seems smarter,Beavis or the average group of contestants on Next?

What I truly miss about B&BH were the music video segments,where they ripped on plenty of singers and bands as well as show their appreciation for what they considered "cool"(mainly heavy metal). To me,that was the best part of the show. So,here for your viewing enjoyment are some of Beavis and Butthead's music critiques,atleast until they are shut down by The Man:

It's always funny when Beavis takes the spotlight and he's at his finest here where he totally drools over Henry Rollins:

The guys were champion channel surfers and here,they go thru the Goldilocks routine with Bob Geldoff,Technotronic(remember them? Wow,talk about a waveback machine!)and then feel just right with some G'N'R:

One of the bands that benefitted from the mocking exposure they recieved on B&BH was Gwar,a favorite of both the guys. Their videos showcased the bizarre stage shows that the group always put on which gave them a strong underground fan base that no doubt increased somewhat upon getting the Beavis and Butthead blessing:

A major complaint lobbed at Beavis and Butthead was that they totally disrepected all forms of authority and paid no heed to anything said by adults. However,as this look at an Alice Cooper video shows,they could pay attention and even listen to one of their elders as long as he spoke to their true concerns in life:


AND FINALLY,THE BEST OF THE WORST

To wrap things up,here is a kickass collection of some of best "sucky" videoes that the guys sat thru,including Yanni,Journey,Poison and The Dead Milkmen. The Milli Vanilli bit is most excellant and speaks volumes subtly:

Not sure what that says about my life though....

I will say that it makes me feel WAY old! and I wonder if future generations would think it was as funny as we did, since the videos wouldn't really be familar to them.... hmmmm

Aw,you're very welcome,Julia. Glad I could brighten your day! Also,I do think future generations will find it funny-true classics never go out of style:)