Two Open Letters for the Nobel prize of one

First off,let me just say congratulations on winning the Nobel Prize for Literature. I can guess by your initial reaction that it's not a big deal for you and I for one am in awe of your take on the whole thing: 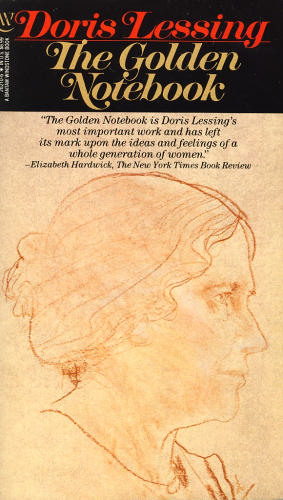 It's not everyday that folks get to see such an open and honest response to news like that,which I think will get more folks to go out and read one of your books much more than winning the Nobel will. I have to confess that I haven't read any of your work but have known of you(and stocked The Golden Notebook at my former bookselling position). I'll be joining the stampede to get one of your books to try and make up for that loss in my personal library(it might be tricky,since supplies tend to run out fast for recent award winners,but I should grab a copy of The Golden Notebook eventually).

In reading about your life,there's plenty to admire-you are a self made person who champions the cause of women without the need to trample men in the process. You speak out against things that you see to be wrong in this world without fear of reprisal. You've written books in several genres,including science fiction,and are still putting out work to this day. Forgive my gushing,Ms. Lessing,but you are the kind of person that I hope to become when I truly grow up,in my own way.

So,I hope that the media gives you a bit of a break(they seemed to swarming all over your doorstep the other day and would it have been too much to atleast let you get inside to put away your groceries before barging you with interview requests?) and that you get to have a nice private moment of triumph over this well earned win.

Lady T and a good number of readers around the world

I have read a few of your books on the subject of literature and while I respect your opinions on the classics,you seem to be very ungenerous when it comes to the current literary scene. I don't think I am the only one who found your reaction to Doris Lessing winning the Nobel Prize for Literature to be rather rude:


"This is pure political correctness," American literary critic Harold Bloom, commenting on Lessing's Nobel, told The Associated Press. "Although Ms. Lessing at the beginning of her writing career had a few admirable qualities, I find her work for the past 15 years quite unreadable ... fourth-rate science fiction."

Now,it is one thing not to be a fan of her books,or to have lost interest in her writing over the years(that happens to many readers with certain authors,genres,etc) but to say that she is the beneficary of political correctness is insulting and absurd. This is a lady who has refused to become a mouthpiece for strident members of the feminist movement,who said in 2006:

"I think a lot of romanticizing has gone on with the women's movement,...Whatever type of behavior women are coming up with, it's claimed as a victory for feminism — doesn't matter how bad it is. We don't seem go in very much for self-criticism."

If you're implying that the Nobel commitee went the P.C. route by choosing a woman this time out,give me a break. You've been around long enough to know that the reasons behind anyone winning any award in the arts is highly subjective. It's no secret that you would've preferred someone like Phillip Roth to win but hey,I wanted Brokeback Mountain to win Best Picture instead of Crash at the Oscars. You can't always get what you want there,buddy. Sure,I was mad about that but life goes on.

You do have the right to your opinions but would it kill you to be less of a snob everytime you offer one up? Your record on this is pretty harsh;you called Stephen King's getting an award for literary contribution from the National Book Foundation an example of "dumbing down" the culture,you pour out the haterade on J.K. Rowling like she did something to your mother and there are plenty of folks still bristling about your comments about Adrienne Rich,Alice Walker and others.

I'm not saying you have to be Mr. Nice Guy,but when someone like Doris Lessing is being given a major honor for her lifetime of achievement,it might help you to remember that old saying of "If you don't have anything nice to say,don't say anything at all." The media does accept "no comment" as an official reply,you know.

Lady T and those of us who are happily reading what ever the hell we want to,without your say-so!
Posted by lady t at 11:17 AM

Lady T, thank you for posting that clip, and thanks for saying what you said. Right ON!

You're welcome,Robin-wasn't her response great?