What will be lighting up your TV screen this Christmas Eve? 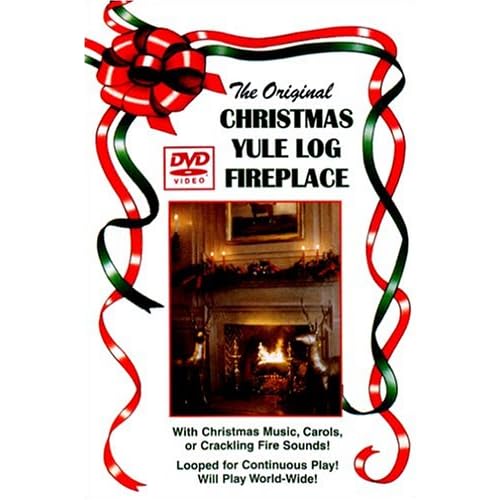 Since the combination of holiday malaise and the looming shadow of the Writer's Guild has caused a lack of TV worth talking about this week(altho I do think that this year's twisted Nip/Tuck Christmas episode was close to raising the bar for Santa smackage than their last time out,but not quite hitting the mark),I flipped ahead to see what would be worth watching on Christmas Eve.

There are some decent shows on,which I'll get to in a moment,but does anyone else out there miss the Yule Log? It was a such a nice thing to click on for a few hours and have in the background as you unwrapped presents or just hung out in the living room,with your tree lights glowing and having a conversation with your family that didn't involve complaining about the state of things or who didn't do this or that chore because he/she always gets stuck doing it and someone else ought to do it FOR ONCE!

Ah,the good old days of yore. Maybe it should be brought back again,to spread some much needed harmony and give some of the gossip coverage(why is Britney's little sister's pregnancy a major headline,why?)a rest:

Ok,enough of that-on with the show! Here's what I found to be on(times may vary,according to your area) and some of it should stuff your stocking just right:

ABC plans to have How The Grinch Stole Christmas on during primetime and fortunately they're showing the authentic Grinch,not the Jim Carrey bag of coal clone that's getting alot of play on ABC Family lately(I swear that if I run into Opie Cunningham,he owes me a few bucks for actually going into a theater and forking over my hard earned green for that attempt at ruining one of my childhood favorites). A few years ago,they did try to cross the Grinch over to another holiday with Halloween is Grinch Night Out,but he really fits into the Christmas pantheon much more snuggly:


A PINK NIGHTMARE TO SOME

TBS will be having a 24 hour marathon of A Christmas Story,this generation's cult classic holiday film. I did buy this movie on VHS but never bothered to grab it on DVD,since repeated viewings of the movie are now officially a tradition. Hard to select just one great silly scene(a favorite of mine is the fantasy sequence where Ralphie's teacher becomes the Wicked Witch of the West after giving him a "C+" on his "What I Want For Christmas" theme paper)but I think most of the fans adore the Awful Aunt Clara gift bit. Who hasn't gotten a terrible present from a relative that your mom or dad insisted on you showcasing for all to see and stare?:

WHO CAN RESIST THAT DARN DONNA REED?

NBC is showing "It's A Wonderful Life",the granddaddy of cult Christmas films. It really is one of Capra's best and a great example of a movie that has the same feel and energy of a long novel that doesn't feel long enough by the end. There's an abundance of plot points and secondary characters to delight in,but one of the strongest elements of this tribute to small town goodness is the romance of Mary and George. Jimmy Stewart and Donna Reed really had some amazing chemistry going there:

HAVE YOURSELF A VERY '90s' CHRISTMAS

VH1's "I Love the 90s,Part Deux" will be another marathon feature and good for them. It's a better choice than E!'s "Keeping Up With the Kardashians"(who the hell are these people and why should we care?), Hey,E,if you're going to run a 'thon,why not play The Soup instead? Perhaps you're saving that for New Year's Eve. While I couldn't find a clip from Part Deux,here's a very timely one from that series which highlights a show folks thought they would never see the likes of again(but will now,due to suits not wanting to pay folks another measly four cents on the dollar!):

Well whatever you watch on Christmas Eve,the important thing is to not let it interfere with the real business at hand-seeing if you can dig up some of those receipts to exchange that horrible sweater your Grandma sent you. Oh,and to enjoy the warmth and love of your family as well.
Posted by lady t at 11:14 AM