Bad Movie Month Birthday Special,serving up a sweet taste of The Stuff

Tomorrow is my sister's birthday and in honor of that,I'm adding an extra addition of Bad Movie Month this week(look for another one this Friday) to focus on a little film that creeped her out as a kid,The Stuff.

Like my sister and I,most of the fans of this campy cult flick first saw it on HBO(or one of it's sister stations)filling up a late night time slot.

Even tho Larry Cohen's small budget cinematic offerings were still getting theatrical releases(I can recall seeing newspaper ads for Q,The Winged Serpent,back in the day),the best exposure to his satirical strangeness came from cable TV and home video.

So,what is The Stuff? Well, no one really knows at first-a group of miners discover this weird gooey glop in a cave and find it rather tasty which leads to selling it as a new healthy alternative to ice cream(this was made in the mid 1980s,when yogurt,both frozen and regular dairy, started to make a major impact as a mainstream food item).

The Stuff does well so that a saboteur, David "Mo" Rutherford(Michael Moriarty)is hired by the ice cream companies to find a way to shut it down for good. He's not the only one suspicious of the popular new treat;a youngster in search of a midnight snack quickly loses his appetite after seeing the Stuff slither around his fridge:


The sinister addicting effects of The Stuff affect the boy's family,with him becoming an outsider in his own home and leading him to team up with Rutherford. The poor kid also winds up eating shaving cream to save himself from being enslaved to Stuff and escaping his zombified kinfolk: 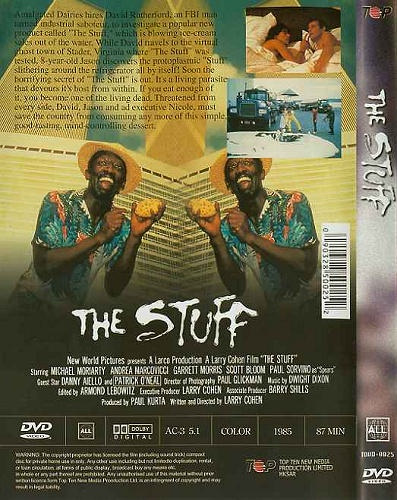 Another ally against the deadly delectable is a former chocolate chip cookie maker who calls himself Chocolate Chip Charlie(Garrett Morris,of SNL fame) who is meant to be a Famous Amos caricature . Unfortunately for him, his dire warnings about the deadly nature of the dessert don't save him from succumbing to the sickening sweet slaughter(Gross Out Alert! You have been warned): 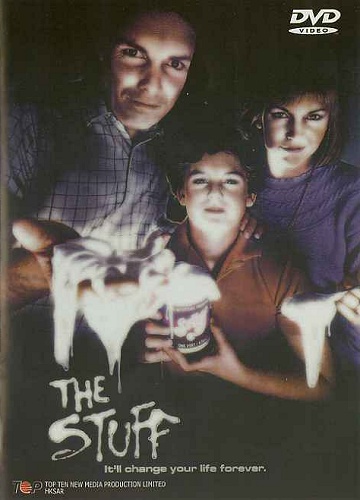 Eventually, enough people start to realize that The Stuff is eating them alive and plot to save the world from the well marketed menace that is literally devouring it's customer base.

I was hesitant to include this movie as a Bad Movie entry,due to it's parody of consumerism which endears the film to some,but the so-bad-it's good dialog("Everyone has to eat shaving cream sometimes!")and gruesomely hokey f/x are more than enough to qualify,plus the fake commercials made for the movie are just as disturbing as the parasite puking scenes are:

You can see why this movie turned my sis off to yogurt for life and influenced her taste for weird horror movies(I can,anyway). So,Happy Birthday,sis and if you want ice cream with your cake,I promise to make sure it's the real old fashioned artificial kind,none of that natural,good for you variety. It's better to know if you're the only one doing the eating at mealtime,not the other way around:

YOU HAVE BEEN WARNED!