Starting down that Revolutionary Road

During last night's episode of Mad Men(a very good one,btw),viewers were given the chance to see the official movie trailer for Revolutionary Road,which is coming out this December.

Starring Leonardo DiCaprio and Kate Winslet,it's a story about a frustrated married couple living out their increasingly unhappy lives in a Connecticut suburb in the mid 1950's. The movie is directed by Sam Mendes,best known for American Beauty,but to me the most exciting thing about this film is that is based on the first novel written by Richard Yates.

Revolutionary Road was originally published in 1961 but received a revival of literary interest in 2000,when the 40th anniversary edition was released with an intro written by Richard Ford.

Ford also did a write-up of the book for the NYT Sunday Book Review that garnered even more attention to the works of a writer who was routinely overlooked for many years but was a strong influence on other folks who were inspired by his realistic tone and dark but not depressing look at people who cling to illusions as a means of dealing with the world they're stuck in.

I was a bookseller when the Yates renewal started up and was not only intrigued enough to check out Revolutionary Road but went on to read The Easter Parade(considered the high watermark of his writing career)and a few of his short stories as well.

One of the major lures for me to Yates was the fact that he was born in my hometown of Yonkers,New York(Yates moved from there at a young age after his parents' divorce and passed away in Birmingham,Ala in 1992).

Yonkers has had it's share of residents who became famous in the arts,notably musicians like Steven Tyler of Aerosmith or actors such as Jon Voight. Finding out that we also had a writer who was nominated for the National Book Award on the strength of his first novel was pretty cool to me and gave my reading of his works that personal touch that means so much.

It also makes seeing this film about to arrive on the silver screen that much more of a major media event to me. Most moviegoers will just lump it in with other studio releases clamoring for Oscar attention but this is as close as I'll probably get to having a personal stake in hoping that this tale from a small town boy goes over well in Hollywood: 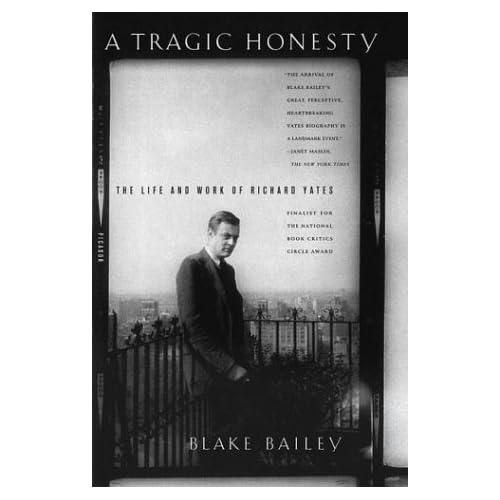 No doubt the film will set off a number of debates regarding how well done or off the point from the source material it is,but the thing to keep in mind is the big leap of recognition that Yates' work will reap out of this.

The book buzz on Revolutionary Road in 2000 impacted on many readers but the movie will strongly carry him over to the mainstream(which he would hate,I'm sure)and if it does well with audiences,we may get some other really good movies based on his books. Not to mention a few more readers in the bargain.

Richard Yates is a classic example of an artist being appreciated long after his time has come and gone. Like many of those folk,his true legacy lives on in his words and of those of the writers who followed in his footsteps and those yet to claim him as their muse. It's encouraging to see an author who deserves the star treatment finally get his due at long last:

Somehow I've never heard of this author. I might watch this when it comes out on DVD :)