Should there be a sequel to Unbreakable?

As the latest M. Night Shyamalan flick(The Happening,which I hope and pray Netflix sends me soon) hits the home video market,there is talk that he might be planning a follow-up to Unbreakable,his ode to superhero myths.

Unbreakable came out in 2000,and it was his sophomore film right after The Sixth Sense,the movie that made M. Night a big player in the Hollywood pond nearly overnight.

While I liked The Sixth Sense a lot,Unbreakable amazed me much more. Let me put it to you this way-my DVD library has a few M. Night movies in it and the only special edition I have is of Unbreakable. I don't own a copy of Sixth Sense and don't feel the least cinematically deprived for it.

For those of you unfamiliar with this film,Bruce Willis stars as David,a security guard who longs to reunite with his wife Audrey(Robin Wright Penn),who is seriously considering a divorce,and their son. On his way to a job interview,David becomes the sole survivor of a train crash which is made than more miraculous by the fact that he is completely uninjured. That freaks everyone involved out,including David himself:

David starts to ask some very disturbing questions and one man believes that he knows some of the answers. Elijah Price(played by Samuel L. Jackson,one of my favorite performances of his)is a prominent comic book and art dealer who has suffered from a lifelong affliction that makes his bones extremely brittle and quick to break. Known as "Mr. Glass",Elijah is convinced that superhero stories are more than just stories,that they reveal the truth about people with extraordinary abilities and their role in society.

David is highly skeptical at first,particularly when Elijah wants to mentor him. After facing a few truths about his past and exploring some of Elijah's suggestions about other powers he may have,David decides to see if he's really hero material out in the real world: 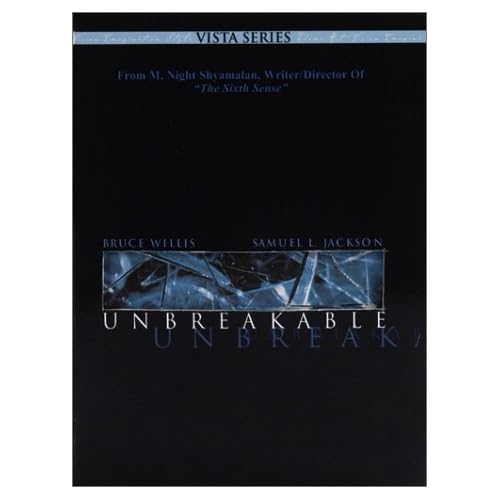 The film did do decently at the box office but was not as adored by the public as The Sixth Sense was(some found it to be disappointing,an all too regular response to many of M. Night's works). I saw Unbreakable when it first hit the theaters and was drawn in by David's plight as well as fascinated by the flashbacks of Elijah's childhood that seemed to form him into the man he ultimately became.

What really hooked me was the way the film was shot;the framing and use of color and shadow in each scene were done in classic comic book style. It's subtle,to be sure,but a clear choice nonetheless.

Also,the combination of a realistic approach to superhero mythology with homage and respect being held to the classic archetypes that the genre is revered for paved the way for other films and TV series who wanted to do more than just have a comic book costume party.

Some of it's influence can be seen in the early seasons of Smallville,where Clark Kent was slowly starting to deal with his status as a young man of steel(the creators of the show insisted upon "no flights,no tights" for a long while,with only the no tights part still intact)and of course,with the current phenom,Heroes.

You could argue that Unbreakable might have a small part to play in films like Sin City,V For Vendetta and Batman:The Dark Knight being widely accepted by critics and moviegoers alike. Many people discovered the movie via home video/DVD,plus TV/cable showings and grew to appreciate it for it's own merits.

The reviews that Unbreakable received upon it's initial release were mixed but tipped over to the positive rather than the negative. It helped to set the tone for future films that went along similar lines of thought.

Unbreakable's ending did make a sequel possible and if M. Night is willing to tackle it,I'm not the only one who would be curious to see the results. My only qualm about the idea would be the concern about the movie being a truly artistic storyteller's decision to make or a knee jerk response to his current film flops by jumping on board the current comic book blockbuster band wagon.

The man's only human,after all,and while I really don't think he can just go thru the motions,a halfhearted second film would be sad to see. Unbreakable deserves better than and so does it's fans. M. Night and company,please do it right or don't do it at all:

I can't really remember much about Unbreakable. I really need to re-watch it. I would however wouldn't mind another 6th Sense if it was done well.