Nice to say hello to The Magic Garden on DVD! 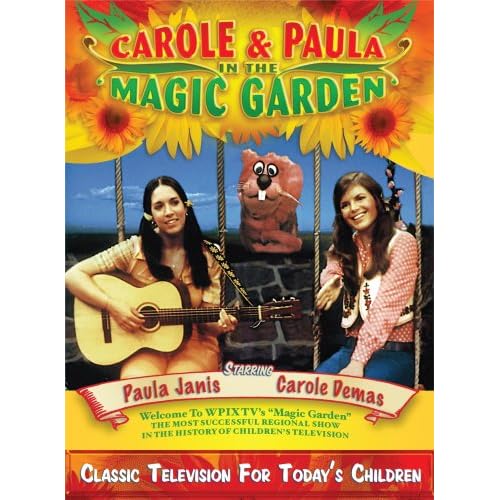 Many folks have favorite TV shows from their childhood that they can only reminisce about with a select few,mainly due to that program being made and shown just in their particular neck of the woods.

The Magic Garden is one of those local delights;it was broadcast on WPIX(now owned by the CW)in New York from 1972 thru 1984. Just a little half hour show for kids starring Carole and Paula,along with Sherlock the Squirrel,giving us some songs,jokes and imaginative playtime.

Now,a new generation of children and adults alike get to discover the old school sing-along sweetness of The Magic Garden,thanks to DVD. A two disc set featuring the best elements of TMG has been recently released and a CD of Carole and Paula's tunes is included as well.

One of my favorite parts of TMG was Story Box. It was a huge trunk that held various props for the ladies to dress up in and act out fairy tales and fables. Just a big old storage container but whenever that quirky little theme song started,I knew it was time for the real magic to begin:

Another cute bit was the Chuckle Patch,a group of giggling flowers that bloomed corny jokes on their leaves. Silly but hey,they only promised you a chuckle,not a big belly laugh:

What folks remember and loved the most about TMG was the songs. Carole and Paula didn't have resort to overdone cutey-cute tones or elaborate dance numbers. The two of them sitting together,usually on the swings,with Paula on guitar,was enough for a memorable melody:

Well,I'm very happy to see The Magic Garden get a chance to shine on a bigger stage and even if you don't have any kids to show this to,take some time out to enjoy this charming blast from the past. It certainly beats watching another mindless reality show or more bad news about the economy. A nice walk in the garden would help to clear those cranky cobwebs out of your head for a little while: