Top Chef's savory season's greetings, the winner of Blush and Heroes wraps up another volume

As promised,Martha Stewart did show up on Top Chef this week,but only to judge the Quickfire Challenge which was to create a "one pot wonder" of a holiday meal. Immunity was not offered up as a prize,just a signed copy of Martha's latest cook book instead.

Ariane won,for her cauliflower puree and herb rubbed fillet of beef. Again,her flair for meats paid off,big time. The Elimination Challenge was announced,with some fanfare as the Harlem Gospel Choir came in to give each chef the theme of their dish to be served at the Amfar charity event hosted by guest judge Natasha Richardson:

Yes,it was the Twelve Days of Christmas and covering for the honeymooning Judge Gail was Michelle Bernstein. There was a bit of drama before the event,with the chefs returning to the TC kitchen to retrieve the food they had prepped the day before,only to discover that one of the fridges had been left open

Most of the food was spoiled,which affected Radhika and Hosea greatly. To everyone's credit,all of the other chefs pitched in to help them find last minute replacements for their dishes.

Both Radhika and Hosea made it to the Top Four with their food on the fly;Radhika had "partridge in a pear tree" and she wound up with a duck leg and pear chutney. Turns out that duck leg is a favorite of Nastasha Richardson's-sweet!

Hosea was declared the winner,since he received the most ribbons of approval from the party guests and the judges also liked his pork loin with chipotle potatoes. His song section was eleven pipers piping and that inspired him to make smoked pork.

On the bottom was Eugene,who had "five golden rings" and made a pineapple and fish with coconut milk that had a Yukon Gold chip on the side. He was told that the plate was too sweet and it was hard to taste the fish. He got a little defensive about that,which made me think he might be sent home for his attitude.

He wasn't the only one who was all bad moody;Melissa was her usual charming self about her strip steak being too cheesy and Jamie was less than thrilled about Michelle Bernstein's flat out dislike of the raw scallop with vichyssoise.

In the spirit of the holidays(plus bonus points for helping out during the fridge crisis),no one was told to pack their knives and go. Judge Tom went into the waiting room to inform the chefs of that and then lectured them about how underwhelmed he was by the food served for this challenge.

He seemed to take great offense at Ariane's making deviled eggs,with six different toppings. First off,she was given "six geese a-laying". That means she either has geese or eggs to work with here. Not to mention that this is a cocktail party,not a state dinner for foreign dignitaries,for Santa's sake! 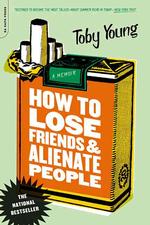 All of his griping about "you need to make food that you think will win EVERY TIME" and "I don't want throwaway canapes!" was too much harsh for this group. Again,COCKTAIL PARTY! Also,unlike other seasons of TC,none of the food served at the Amfar party was burnt,undercooked,overcooked,under seasoned,over seasoned,etc. I've seen a lot worse dished up for some of these challenges in the past and so has Tom. Mellow your Grinch heart out,Scrooge,seriously.

Next week may be a repeat of the TC holiday challenge but the next new episode will have another replacement judge for Gail-Toby Young,whose "How To Lose Friends and Alienate People" memoir adaptation was released into movie theaters this fall. I'm reading the book right now and let me tell you,this guy is super snarky. He might even give Anthony Bourdain(I hope he comes back this season)a run for his money.

Congratulations to Nolan,the first winner of Blush:The Next Great Make Up Artist! I was so happy that he won,his work has been outstanding all season long. His Max Challenge,which was to create a "furtistic" look,was the best of the three,in my opinion.

His only misstep was a pair of feathered eyebrows during the Elimination Challenge,which was to make three different looks for runway models at a Badgley Mischka fashion show. The designers had told Nolan that they didn't like the brows but he wasn't able to take them off,since the glue had already set.

Fortunately,his other make up was good enough to give him the win. Maxi did some very stunning stencil work,but his backstage antics and lack of order with his makeup kit took him out of the running. Todd did his best,too. Blush was rather fun to watch and hopefully,this will not be the only season we get to see of this show.

The Villains volume of Heroes concluded this week,with some folks regaining their powers,others acquiring new ones and a bit of a body count. As expected,Sylar had a sit down with Angela that didn't end well,for him anyway.

I'm not worried about Sylar being gone for good,since a)this wouldn't be the first time that he's come back from the dead and b)John Glover(Lionel Luthor from Smallville)has been cast as Sylar's father. Pretty obvious that they're bringing the character back there,with a development like that!

Fugitives will begin after the Super Bowl next year,with Nathan ratting out his fellow super powered folk to be hunted down by the government. Ironic how the very future that Peter was trying to prevent seems to be coming to pass:

NIP/TUCK: The new season starts on January 6 and it looks as if things are just as messed up as they ever were. Only,if I were Kimber,I wouldn't be so quick to toss the karma blame around. She's racked up some pretty nasty payback points on her own there: