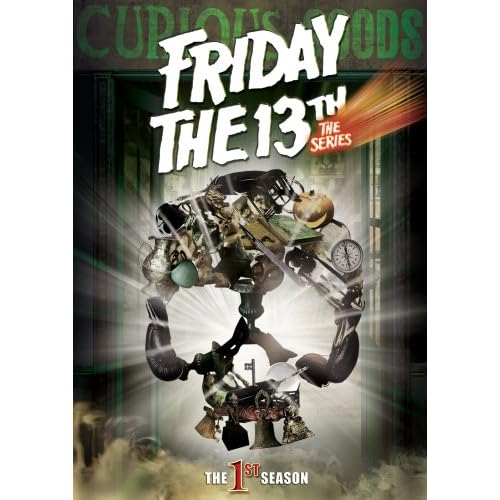 One of my favorite old school horror TV shows is Friday The 13Th:The Series(which had nothing to do with the Jason Voorhees films,of course). For a long while,the show was only rerun on certain cable channels,with Chiller being it's current home.

At last,the series is now out and about on DVD. Seasons One and Two are available for folks to either recapture some of that cheesy glory or discover the scary salty goodness for themselves. 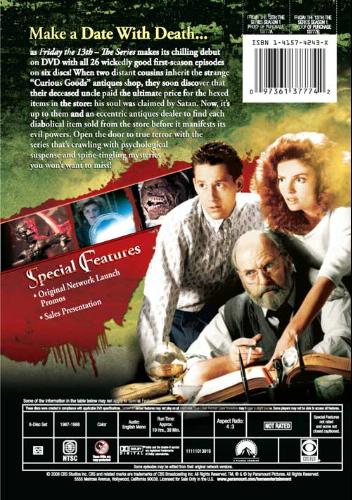 To give new comers an idea of what the show is about,here's the bare bones of the concept: Cousins Micki and Ryan inherited an antique shop from their evil Uncle Lewis who specialized in selling cursed objects. The objects have mystical protection from destruction,so the only safe place to keep them is in a vault located in the store's basement.

Aided by Jack,an old buddy of Lewis' who pulled away from the dark side,and a handy list of who bought what,the intrepid trio are on a quest to hunt down all of the cursed items in order to stop the spread of satanic knickknacks.

The Chiller channel is showing several episodes today,but none of them are my personal favorites. So,as a special Friday The 13th treat,here are some choice clips of my all time favorite FT13 episodes:

VANITY'S MIRROR: The cursed item of interest here was a compact mirror that Plain Jane gals used to make cute guys fall in love with them. The catch was that the love struck guy had to die,one way or another. The compact was discovered in the clutches of a crazed homeless woman at first but then found by Helen,a frumpy high school girl angrily jealous of her more attractive sister.

This was one of the few episodes in which the jinxed antique wasn't reclaimed by the end of the show. It turned up in a later episode,where a model used it to recapture her damaged beauty. I preferred the original introduction of the mirror and enjoyed the twisted Carrie theme that made you a little sorry for Helen(only a little,tho):

THE QUILT OF HATHOR: Micki and Ryan are contacted by an aunt of theirs who is a member of the Penitites(an Amish/Menonite type of religious group)about a mysterious quilt that causes dreams to come true in a Freddy Kruegar sort of way. The first person to use this bad blanky is Effie Stokes,who is desperate to marry the leader of their sect,Reverend Grange, by having the quilt kill off her rivals.

Ryan gets very distracted in this story line,due to falling in love with the Reverend's daughter,but Effie's ambitions are in full force. She's not only motivated by love-the wife of the Reverend is also next in line to run the colony if something happens to her husband. You gotta admire her sinister social climbing,plus her dreams have a rather historical fiction bent to them:

This was a two part episode-Effie tricked Micki and Jack with a fake quilt and ultimately wound up marrying the not-so good Reverend who turned the tables on her. He started using the quilt to wipe out his enemies,which naturally lead to Ryan's romance breaking up. Good for the show,sad for him:

THE CHARNEL PIT: The Marquis De Sade shows up here,as owner of a two sided painting that takes one person through time from the present and sends one out of the past. A historian was using it to gain old manuscripts to further his career and paying for that by shipping out girls for De Sade's sick pleasures.

Micki fell into the painting's power but was able to figure out what was up while in the past(not her first bout of time travel)and tried to outwit De Sade at his own game. Things got rather interesting at one point,as Micki got more into her role playing that she intended. Ryan was no longer part of the show(he was written out in a very unique way)by then and was replaced by Johnny,a character briefly introduced in the second season. Fortunately,Micki was still around to hold things together:

THE BARON'S BRIDE: Vampires first make their appearance on the show,as the gang seeks out a cloak that makes a man irresistible to women. The cape also comes with a jeweled clasp that allows the wearer and his companion to go back in time with a couple of drops of blood as the trigger.

Micki falls into the clutches of a newly made vampire and Ryan winds up tagging along for the trip to Victorian England,where he gets some help from a struggling writer(I think you know where this is going). If I only had to chose one episode to watch,this one would be it. I love the dark romance of the story,the shift to black and white film for the scenes in the past and the little chant spoken to make the cloak curse come to life:

Have a safe Friday the 13th,folks and try to catch this show on Netflix,if you can.
You'll have one devil of a time delving in it's dark delights: