Will the new Witch Mountain movie be worth racing to? Another remake of a classic is hitting the theaters on Friday,which is being called a "reimaging" due to the radical shift of the storyline. In the case of Race To Witch Mountain,that's actually a correct term.

This new version focuses more on a secondary character,a taxi driver named Jack(played by Dwayne "The Rock" Johnson)who happens to pick up two extraterrestrial twins on the run from a Men in Black type who need to get to Witch Mountain to prevent an alien invasion of Earth.

Jack even gets a love interest thrown in,and the chance to punch a creepy faced space invader out. That's fine and it'll probably be a fun family movie. The only regret I'm having is the loss of the spotlight on the twin brother and sister( called Seth and Sara here instead of Tony and Tia)who were intended to be the featured players from the start. 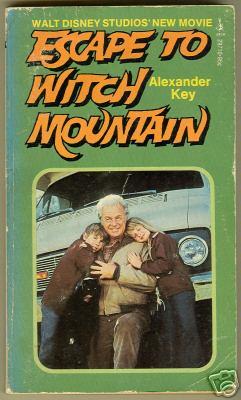 Alexander Key's 1968 novel,which was much darker than the early Disney film adaptations made from it were,had the orphaned teen twins Tony and Tia Malone trying to find out more about their past in order to know why they were both had paranormal abilities such as telepathy,telekinesis and communication with animals and what their ultimate purpose in life was.

While I didn't read the book and granted,the original Disney takes on the story were much more lighthearted than the source material,the emphasis was still on the kids and their outsider status. Both their peers and adults had trouble dealing with the Malones and their otherworldly powers,whether used rightly or wrongly:

This new version just appears to be more of a star vehicle for Dwayne Johnson,the more I see and hear about it. Don't get me wrong,I like Johnson as a movie star and have enjoyed plenty of movies that he's been in such as The Scorpion King,The Rundown and even the remake of Walking Tall.

He's a new generation Schwarzenegger,with a similar sense of humor about himself and a steady confidence in what his strong points as an actor are. I even think that he's much more relatable and relaxed than Arnold and good on him for building a solid career in film after leaving the WWE.

But,I still feel that the story really belongs to the kids. Sure,Johnson will get folks to go on opening weekend and they'll have a lot of bang for their buck,but the true charm and attraction of the original tale is being lost in the sci-fi shuffle:

Perhaps I'm being too fussy about this;after all,the follow-up Witch Mountain movies(one of which was intended to be a pilot episode for a TV series) had just as much hunt and chase action as this new one seems to have. If anything,a renewed interest in both the book and the earlier movies may be stirred up by the potential success of the latest entry into the Witch Mountain cannon. We shall have to wait and see:

I'm ashamed to admit it but I don't believe I've seen the first one! I know it was adapted from a book and therefore on my Books to Disney Movies personal challenge so I'll get to it eventually.