By now,most of you know about the deaths of Farrah Fawcett and Michael Jackson(especially since his demise is fast becoming a world event)and much has been said already regarding them both. However,I do want to add my two cents to the mix,plus pay a bit of respect there,and as the old cliche goes,it's ladies first.

Farrah Fawcett is a celebrity from my childhood,considered one of the most beautiful women on TV and pin up posters everywhere. Despite her quick rise to fame,she never came across as a bossy diva type. Farrah appeared to be a genuine sweetheart who was sexy in a charming,unpretentious way:

Like many other Hollywood hopefuls before her(and even sadly after),Farrah was stuck with the blonde bombshell persona that Charlie's Angels had given her and dogged most of her early film career. It wasn't until later in life that she was able to show her acting chops in more serious roles such as the rape revenge drama Extremities,both on Broadway and in the film adaptation.

Most of her more powerful work came from made for TV movies,like The Burning Bed and biopics of Barbara Hutton and Beate Klarsfeld. I was very impressed by her performance as Diane Downs,the sociopathic mother who tried to convince everyone of her innocence in the shooting of her three children in the adaptation of the Ann Rule true crime classic,Small Sacrifices. Farrah brilliantly showcased the charming charisma used by this devious woman to get her way at all costs: 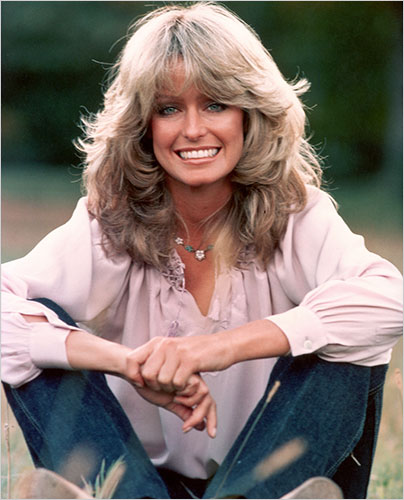 Farrah had her ups and downs,both in her personal and professional life,but she did try to become more than what others wanted to see her as,a laudable goal for anyone.

There was a bit of controversy regarding the NBC documentary about her struggles with cancer,but in my opinion,that was Farrah's way of using such a sad situation to her best advantage by providing others with some shared sympathy and hope.

She may not have been the ideal feminist role model but so what? She lived life on her own terms,which is something that feminism is supposed to be all about. To paraphrase a Marlene Dietrich line,she was some kind of a woman...what does it matter what you say about people?:

What can I say about Michael Jackson,who was the Citizen Kane of pop music? His phenomenal talent made him a modern day legend and his impact on the world of music will last well beyond this century and rightly so.

The real tragedy of his death is just how much of a tragedy his life had become. No need to go into details;we all know that old saying about the biggest they are,the harder they fall. Jackson's fall was the size of the Grand Canyon and it's a real shame that no one around him was able to really help him climb out of that pit of despair to find a way towards true inner peace.

Perhaps it's better to remember him as he was,before he got into that insane fame quagmire that engulfed the likes of Elvis as well. Choose your own personal favorite moment in time,whether it's Thriller,which changed the playing field for music videos forever,or Bad,Human Nature,or even back in the Jackson 5 days when his potential shone brightly,illuminating the stardom that was yet to come:

Along with the news of Ed McMahon's departure from this world,this has been a rather sad week of memorials in the celebrity realm. Many will mourn,including those who were closest to these folks,their true family and friends who deserve their time to grieve in private. The rest of us can pay our respects together as fans without turning this sorrowful situation into a sideshow. That's the least we can do here,in a real appreciation of what they have given to us over the years: