And now for our fabulous Fat Cat giveaway! 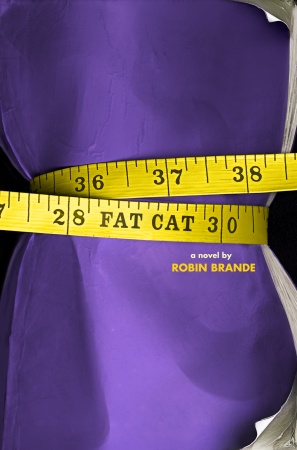 I'm happy to announce the beginning of yet another book giveaway here at LRG,especially for such a great book as Robin Brande's second novel for teens,Fat Cat. Not only will this be one of the longest contests ever held at this blog,it will have five winners who will receive a specially made bonus with their book.

Before I get into that,let me tell you about this wonderful book. It's the story of Kat Locke,a brilliant high school student who has personal as well as intellectual motivation to come up with a topic for her AP science project that will not only win the annual science fair but show her former friend and imagined enemy Matt McKinney that she can beat him at his own game.

Kat's experiment uses her as the guinea pig for a radical lifestyle change;she takes on the habits of hominads(cave people,in layman's terms)by giving up such things as make up, TV and junk food and limiting her use of modern technology(computers,cell phones,riding around in cars).

All of the exercise from walking everywhere and eating more of a vegetarian menu causes her to lose some extra weight and make Kat more attractive to guys,which launches another experiment that may lead to some interesting revelations about her and Matt and what really happened that caused the break between them. 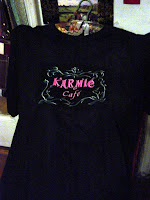 Another positive result of Kat's experiment is her taking up old interests that she abandoned after the situation with Matt like cooking. Kat becomes a pretty great chef,so much so that she's recruited by her best friend(and budding poet)Amanda to take over the kitchen at the Karmic Cafe,a vegan restaurant with the good taste to hold open mike nights for local poets but bad tasting dishes.

As part of your Fat Cat prize package,you will get a "Karmic Cafe" T shirt along with your signed copy of the book(winners will be asked to provide their shirt sizes upon e-mail notification of their prize). Hopefully,the photo on the right hand side here gives you a good idea of what the shirt looks like(it's my own Karmic Cafe shirt which I'm wearing right now).

The Fat Cat Giveaway starts today and ends on October 6,with this contest being open to both U.S. and Canadian residents. All you have to do to enter is just leave a comment at this post,naming your favorite fictional scientist. Since science plays an important part in Robin's work,I thought that it would be the most fitting theme.

"Uh,Lady T,that's kind of hard,isn't it?" Not really,folks. Turns out there are scientists all around us in pop culture land,both heroes and villains alike. They're not just in sci-fi books or film(which you can chose from,of course)but in other ends of the entertainment spectrum. For example,most of the crime fighting shows these days have a team of crack experts ready to use chemical analysis and technical details to catch the bad guys. One of the best is Bones,based on Kathy Reich's series of mystery novels featuring forensic anthropologist Temperance "Bones" Brennan.

Dr. Brennan(played by Emily Deschanel)and her super smart staff work with FBI agent Booth(David Boreanaz)to solve unusual murders but it's the connection between Booth and Brennan that makes their professional(and potentially personal)partnership work:

Another odd couple pairing on the crime scene is the brother act in Numb3rs,where Special FBI agent Don Eppes (Rob Morrow)often relies upon the off the wall but accurate insights of his genius mathematician sibling Charlie(David Krumholtz)in hunting down potential threats to society:

If you look to silver screen,there are plenty of savvy scientists to choose from such as Contact,where Jodie Foster's determined astronomer puts herself on the line to make possible mankind's first contact with extraterrestrial life:

Scientists have a sense of humor,too as 1985's Real Genius shows,with it's amusing arrogant Chris Knight,who never fails to make a memorable,if not always appropriate impression on others:

My favorites,I must admit,are the villains,those builders of death rays and manipulators of biology who scheme to rule the world or at least a part of it. Tops on my list is Dr. Pretorius from The Bride of Frankenstein. Played by the delightfully wicked Ernest Thesiger,this charmingly ruthless mentor is one of the best elements of the film and my only weakness when watching it again and again:

All right then,let's get this party started,shall we? I look forward to seeing your picks for favorite fictional scientists(yes, Dr. Horrible counts)and to announcing our five fabulous winners as well. Good luck to one and all and hopefully this contest gives you something to celebrate,one way or another:

From TV:
1. Sheldon Cooper and Leonard Hofstadter on The Big Bang Theory on CBS. (Tie for first place. I think I like the Leonard character better but Sheldon is SO well-played!)
2. Spencer Reid, behavioral scientist, on Criminal Minds on CBS.

From books, way too many to name. I like Ms. Shepherd, the biology teacher in Robin Brande's Evolution, Me, and Other Freaks of Nature for her awesome balance of religion and science and Mr. Smithers from Horowitz's Alex Rider series for his awesome technological adaptations.

Woo! My favorite scientist is probably from the 90's Disney movie Genious... e.e (Sad, I know...) But I always though it was cool how Charlie Boyle/ Chaz Anthony (Trevor Morgan X.x) could do all this scientific stuff at such a young age! :)

Plus I may have thought he was just a little ccute back then.... BACK THEN! X.x

No need to enter me. I'm dropping in to say thanks for the e-mail. I've got this posted at Win a Book for you.

Hey, Lady T! Thanks for hosting the contest.

I read your post this afternoon and have pondered it ever since. My favorite fictional scientist? I thought of my favorite TV shows/movies/books and mentally skimmed them for scientists. As I glanced at my bookshelf, it hit me. Meg Murray. From A Wrinkle in Time on, her bravery, curiosity, intelligent speculations, and wonderings carry her through one adventure after another. She follows in her parents' footsteps and enters a career in science. Quite a role model for Kat Locke, no? (Gee, I need to read those books again! And I can't wait for Fat Cat!)

Hello, this is Katiesis from Robin's blog. I just heard about this contest. When my sister mentioned it could be from television as well, my first thought was Samantha Carter from Stargate SG-1. I love Stargate's mix of science, fantasy, and real life. I like Carter because she's smart, funny, an individual, strong willed, but she is also vulnerable. She lives around a lot of men, and is still able to keep her focus and save the world. I like strong women characters, and Samantha Carter is one of the best.

Don't know if this counts as a totally fictional scientist, but I love love love the fictionalized version of Albert Einstein in Alan Lightman's Einstein's Dreams. Whata gorgeous book!

Temperance "Bones" Brennan is my favorite fictional scientist. I have seasons 1-3 of Bones and watch them over and over again.

Haha...I pick Beaker and Dr. Honeydew from the Muppets. They always made me laugh!

Thanks for hosting the contest. I'd love to be entered.

I don't think I have one but as I was thinking the only one that came to mind was Mohinder Suresh from Heroes.

Ah, if only Gregory House counted. :) I, too, love Kay Scarpetta.

don't know why but dr. horrible is the only one that really comes to mind. maybe because of how and why he became so horrible.

Favorite fictional scientist in a book: Casey from Evolution, Me, & Other Freaks of Nature by Robin Brande.

Sheldon Cooper, hands down. Sorry, but Leonard doesn't even come close to comparing. Sheldon is unintentionally hilarious, neurotic, slightly insane... and totally awesome. Of course, I don't have to live with him. I doubt I'd like him as much if I did.

Deanna Wolfe in Prodigal Summer by Barbara Kingsolver... this was the first character which popped into my head...great story.

I would absolutely have to pick Mohinder Suresh from Heroes.

Thanks for the contest!

The first one that came to mind was Dr. Scratch and Sniff from The Animaniacs. But I like Dr. Horrible much better. :) My email is everead/at/gmail/dot/com just in case it's tough for you to find.

My favorite scientist would have to be Grisham from CSI
andie.v107(at)yahoo(dot)com