The culinary charms of Chopped

One of my new favorite Food Network limited run series is Chopped,which started up last January and has been on long enough to begin a special round of "Chopped Champions" this month. Ted Allen hosts(he does a lot of work on FN,with Food Detectives and occasionally sitting in on the judging panel for Iron Chef America. He's becoming the Ryan Seacrest of that channel,I swear!)and there is a rotating panel of chefs who determine the winner of the ten thousand dollar prize each episode. 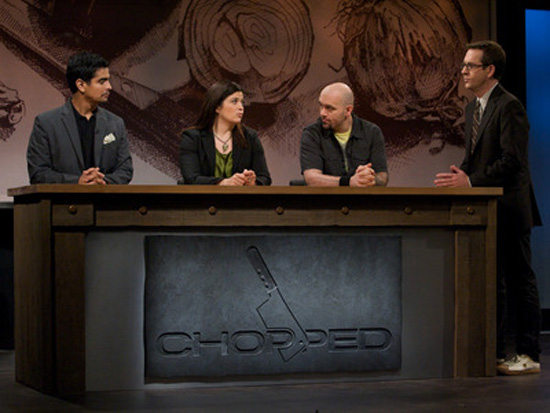 The premise of Chopped is relatively simple;four chefs compete in three rounds that add up to a three course meal-appetizer,entree and dessert. All of them are given a time limit of about thirty minutes to come up with something using the surprise ingredients handed to them in a "mystery box"(there's also a pantry and fridge filled with supplemental items nearby). Each round,one of the chefs is eliminated with only one left standing at the end.

Some people find this show to be a rip-off of Top Chef,but not me. True,this does resemble the Quickfire portion of TC,however,Chopped is more about thinking fast on your feet and whipping up a quality meal with very little prep time. It also tests the talents of the chefs,most of whom are up and comers in the culinary arts and showcases their skills beautifully:

Another amusing component of Chopped is the black basket of mystery items handed over to the chefs;some rather weird combos are created here,using both exotic foods and commercial products seemingly willy-nilly at times:

I also enjoy seeing the chefs themselves,many of whom are as bold as their flavor profiles. There's very little opportunity for backbiting and cattiness amongst the contenders(altho a few snide comments get made during the solo interviews that bridge the segments together)yet everyone appears to get along well. Picking a chef to root for in such a short time turns out to be easier than you'd expect,based both on their food and their personality which at times accurately reflect on one another:

The judging panel changes over rather frequently,yet there are some regular faces in rotation such as Aaron Sanchez(who is a co-contender in Food Network's Chefs Vs. City),Amanda Freitag and Marc Murphy. One of my favorites is Alex Guarnashchelli,who has made appearances on Iron Chef and has a show called "Cooking Loft" as well.

Alex is a really tough judge that brooks no excuses for badly cooked food or poor presentation of the plate. She's right up there with Kerry Vincent,in that her attention to details is due to her passionate love and respect for the culinary arts which is what makes her demand the best of others in the field. Alex also loves a good down home dish every now and then,like fried hot dogs or barbecue shrimp. She's just an old fashioned happy eater at heart,in my opinion:

The Chopped Champions series begins tonight and I fully intend to watch all of it to the bitter end. Hopefully for one of the former champs,the end results will be a second serving of sweet victory: