On The Shelf with Jason Rekulak

One of the biggest success stories in recent publishing history is the creation of Quirk Classics,which debuted it's offbeat approach to literary classics with the release of Pride and Prejudice and Zombies last spring.

P&P&Z,which combined the original words of Jane Austen with the reimagined story line provided by Seth Grahame-Smith,may have seemed to be another jokey title in someone's catalog but the joke is on those who assumed so. It became a best seller all around the country and the world,with eager fans(hopefully live ones not in need of actual brain food) clamoring for more.

The newest Quirk Classic release,Sense and Sensibility and Sea Monsters which is co-authored by Ben Winters,looks to follow in the same gory footsteps and make a few new splashes of it's own.

For these amusing retold tales,we must thank Jason Rekulak who is an associate publisher and creative director at Quirk Books. The Quirk Classics line is his Frankenstein creation come to life which, oddly enough, has not been run out of town by angry mobs bearing pitchforks. His publishing resume includes time spent at St. Martin's Press and the Quality Paperback Book Club,along with a number of other well received titles for Quirk. We are most fortunate to have him spare a few moments from his literary mash-up lab to answer a few questions regarding the current state of Quirk Classics and possibly get a few glimpses into it's future:

1) Quirk Books is best known for their catalog of offbeat reference books-what made you decide to start up a line of fiction titles?

We'd always wanted to publish fiction, but we didn't want to release the umpteenth novel about a young woman coming of age in Manhattan while attending cocktail parties and yadda yadda yadda. We wanted to wait for the right book.

2) What lead you to link Sense and Sensibility with sea monsters?

After the success of P&P&Z, everyone was encouraging us to do vampires. From a business standpoint, when you look at the numbers for Twilight, this makes a lot of sense. But from a creative standpoint, the vampire genre just seemed exhausted. We didn't want to publish this year's 1 millionth romance novel about vampires.

We wanted to do something more fun, something more unexpected. Sea Monsters allowed us to draw from a rich diversity of sources -- Jules Verne novels, celtic mythology, "Lost," "Jaws," Spongebob Squarepants -- while preserving the elegant and timeless romance at the heart of Austen's original novel:

3) Were you surprised at the success of Pride & Prejudice & Zombies?

Yes and no. I knew the book had a lot going for it, but that never means anything. Every editor knows the experience of working on a really good book that fails to find an audience. So yes, I knew the book had everything it needed to be successful...but no, I never thought it would be translated into Croatian and twenty other languages!

4) Are there any plans in the works to make more monster mashes from Jane Austen's novels?

Working on these books is sheer pleasure. If people want more, we'll bring
it.

5) Will there be other literary authors getting the Quirk Classics treatment in the future?

I hope so! We should be announcing any plans over the next few weeks.

6) What are some of the difficulties of mixing parody material with classic literature?

The goal is to add a bunch of funny & seemingly incongruous stuff while preserving (and ideally amplifying) the ideas and themes of the original novel. We just received a nice review of S&S&SM from New York Magazine that says the monsters in our story "serve as gargoyles emphasizing the immaculate balance of her original story's structure."

In the original S&S,Colonel Brandon is considered dull and unattractive; in our version, he's the same character, only he's been cursed by a sea witch, so there are slimy tentacles extending from his face. But his dialogue hardly changes at all;he's the same character wearing a funny mask.

7) Is there any chance of a Quirk Classic featuring vampires(not necessarily Jane Austen related) showing up someday?

If we can think of a fresh approach, we'll try it. In the meantime, I believe there are plenty of others publishers who are scrambling to bring Jane Austen vampire books to the marketplace. 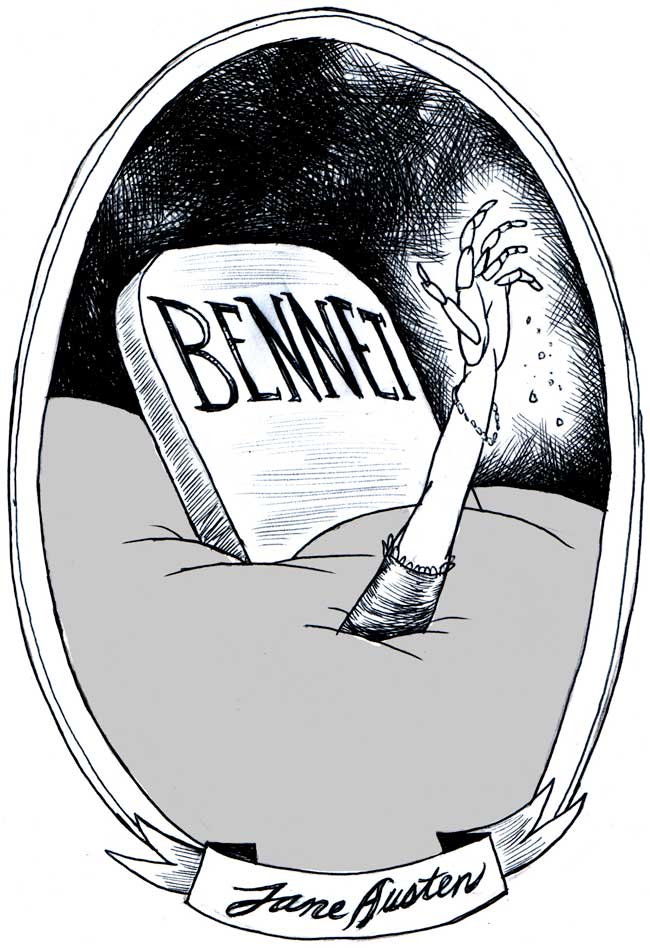 Much thanks to Mr. Rekulak for his time and best of luck to Quirk Classics,who I hope will delight us with many more merry monster mashes to come. If you haven't snatched up a copy of Sense and Sensibility and Sea Monsters yet,do so at all costs. It is a worthwhile addition to your private library of entertaining elegance,along with a few helpful hints about fighting off giant fish attacks.

I do truly hope that someday Quirk Classics will venture into vampire lore,since it is ripe for parody(even for those of us who bask in the newest vein of bloodsucking celebrity)and an old school setting would showcase this rather nicely,in my humble opinion: