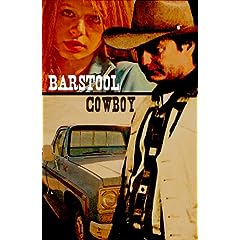 Normally,I hold off on talking about bad movies until August(known as Bad Movie Month around these parts) but this weekend,I was introduced to a film so painfully awful to watch that it couldn't wait until next summer. In fact,this movie is so bad that it makes the reigning champion of the current bad movie circuit,The Room,actually look like an Academy Award winning film.

Barstool Cowboy is the story of Mick(Tim Woodard),who drowns his sorrows over women by keeping vigil at his favorite barstool at the local watering hole and letting his beard grow in. One day,an "artsy" girl comes by to draw the outside of the place,causing all of the men lapping up booze inside to panic about the evils of such high minded females(it sounds like a meeting of the He Man Woman Haters club). Mick ventures outside and starts up an impromptu relationship with the young lady in question.

Her name is Arcy("Marcy without the M"), played by Rachel Lien whose acting style here suggests a zombie Avril Lavigne approach,and possesses the drawing ability of a slightly advanced ten year old.

Mick and Arcy's romance consists of two nights spent in a barely furnished hotel room,so sparsely set up that Mick has to make coffee on top of the bathroom toilet,where they get drunk and cuddle(fully clothed,plus I can't recall even seeing them kiss once) while making conversation not good enough to be called inane.

By now,some of you may be saying "Don't be so picky,Lady T. It's a little movie,sure,but maybe there's more to it than meets the eye!" No,not really,folks. For one thing,the pacing is thicker than molasses mixed with pea soup-the official running time of Barstool Cowboy is 90 minutes but it seems to take longer than a PBS miniseries for one scene to move along.

Also,the stilted dialogue is matched by the stilted delivery of the actors,who at times are clearly talking at the camera instead of the person they're supposed to be addressing in the scene. Combined with poor lighting that makes a London fog seem bright and shiny and long sequences of either shopping for food and drink items or montage moments with music that would make the most hardened criminal confess all of his sins,Barstool Cowboy is a bad movie marvel to behold.

Still not convinced? Watch the first five minutes of this miserable masterpiece and see the newest wonder of the cinematic world for yourself:

It may be harder for Barstool Cowboy to get the indie cult status of The Room,particularly since the male lead of BSC doesn't have the bizarrely amusing charisma of Tommy Wiseau,whose onscreen relationship with the infamous Lisa holds more water than any second of Mick and Arcy's whirlwind love affair:

However,I think there's hope for a Barstool Cowboy cult movement-for one thing,it's loaded with random pointlessness,such as duel montages of Mick and Arcy spending their day apart,with long shots of Arcy snacking on Cheetos while Mick fills out a job application that takes all day for him to write on one page.

Also,there's a lengthy explanation of an elaborate scheme to fake out a drug test,followed by having every bit of that plan painstakingly acted out for the audience! Not to mention that any number of drinking games can be played with this movie-take a shot when someone else drinks anything onscreen and you'll be wasted before the first half hour is up.

Barstool Cowboy is available on DVD and rental from Netflix,so if you're looking to discover the next best of the worst on film,pull up a chair and settle on down. While "Don't fall in love with me." might not have the one liner sting of "You're tearing me apart,Lisa!",you may want to stay true to this bar stool:

hmmmmm - I'm gonna have to pass on the DVD rental of this one. LOL