An interesting read can be found in most unlikely of places

Every spring and fall,the church across the street from my building holds a rummage sale and they always have a special section set up for books,ranging from worn out children's titles to formerly fad-tastic diet guides. They also get a nice mix of fiction,and while sometimes the pickings are slim,you can usually find a nice paperback or two worth getting for a quarter.

There's never really a theme with the fiction titles,but at this fall's sale,something was clearly different. Someone donated a lot of science fiction titles this time out and not just the usual suspects like Bradbury or Frank Herbert. Many of them were the works of Samuel R. Delany,a writer who gained a bit of a renaissance a couple of years ago with the reprint of his most popular and controversial novel,Dhalgren.

Dhalgren is one of those "either or" type of books-you either love it or as Harlan Ellison once did,throw it against a wall. The plot is miles away from linear,but the basic story line follows a young man called Kid,who has a patchy memory at best and is wandering the streets of a isolated and destroyed city in some future time.

Kid is trying to figure out who he is and what purpose his journey and the people he runs into along the way hold for him. My sense of it is that if James Joyce had tried his hand at science fiction,this might be what he would have come up with. I've never read Delany before,yet the name was familiar to me and the chance to read such an unique book like this in it's original paperback form doesn't happen every day,so I bought it.

How far along I'll get into it is another story but I'm willing to give Dhalgren a try at some point in my reading future. One of the book's themes is how time can become a Moebius strip of experience and various possibilities,which in the right creative hands can make a seemingly mad world make sense,a perspective worth pursuing in fast changing times such as these:

Also on deck were the first two volumes of Neal Stephenson's Baroque Cycle,Quicksilver and Confusion,that I grabbed up,despite the fact that Quicksilver was suffering from some serious water damage(I spent a good part of the day separating the stuck together pages carefully with a letter opener)and half it's front cover missing.

It was Volume One,after all,and it wouldn't make sense to pick up just the second book without the first,now would it? Stephenson interests me,with his rather complicated looking plots and flights of fancy that may appear to be scatter shot in approach but his literary themes are rich with imagination,plus he rarely puts out anything less than 500 pages,a real enticement for a book junkie like me.

The Baroque Cycle has a mix of historical fiction and sci-fi,as a number of interconnected characters seek fame,fortune and knowledge within the world of the late 1600s. You could almost call it steampunk,but it's in supersize portions that are hard to squeeze into just one genre niche.

Stephenson is one of those authors who puts out such daunting mammoth works that a casual reader may feel put off by,yet his prose is too intelligently and elegantly woven to ignore. I still haven't finished Anathem yet,but am not giving up on completing at least entire Neal Stephenson book in my lifetime. Just from the beginning of Anathem,I can see that he's actually a pretty down to earth guy who just happens to think big thoughts about sci-fi,fantasy and other pop culture wonders of the world: 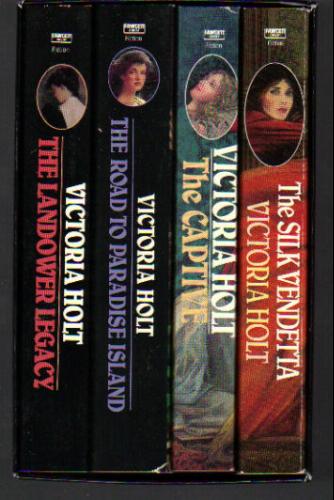 My final purchase of the day was in a totally different literary sphere but just as fanciful nonetheless. Sitting on the sidelines was a small slipcase of books labeled "A Victoria Holt Quartet" that I nearly decided against buying but had a last minute "oh,what the hell" moment and paid a dollar for.

Turns out to be more of a bargain than I expected. Victoria Holt was one of the many pen names that Eleanor Hibbert wrote under(she also wrote historical fiction as Jean Plaidy and a family saga series as Phillipa Carr) unbeknown to her numerous fans before she passed away in 1993.

The Victoria Holt novels are considered Gothic/suspense romance tales,usually about a young woman involved in discovering some long ago family secrets or thrust into the middle of circumstances beyond her control. Many of them are now out of print,so this find was the equivalent of coming across a four leaf clover.

The four books in my newly acquired set include The Silk Vendetta,The Landover Legacy and The Captive,which has it's leading lady going from being stranded on a desert island with a man suspected of murder to becoming a prisoner of pirates and then sold into a Turkish harem. Never had the chance to read a romance novel with pirates before and I'm looking forward to tasting that old school flavor:

While hunting for good books at any sort of secondhand sale is pretty much a game of chance,finds like this are what makes it all worth while. Even my sister found a couple of nice books for herself,a pair of A.A. Milne Winnie the Pooh titles with the original E.H. Shepard illustrations. They were a tad worn out,but that didn't matter to her. She just wanted them to enjoy the artwork,a good enough reason to me.Some treasures are beyond measure,no matter what state the showcase for them is in: