The state of the book nation,on and off line 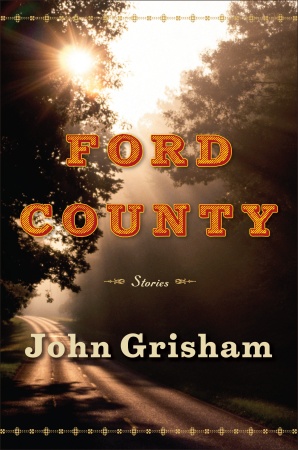 On the Today Show this morning,John Grisham did an interview to promote his newest work,a collection of short stories called Ford County,which has been one of the ten titles being heavily discounted in the current book pricing war online.

Grisham was asked for his opinion about that(including the letter sent by the ABA to the Justice department)and while he admitted that it wouldn't affect him much financially,it would become a long term problem for future writers trying to break into the business.

Grisham also expressed concern about the rise of the e-book,which has a number of controversies of it's own regarding fair prices and release dates. He worries about how the impact and availability of e-books and readers may drive some folks out of business. While authors such as Sherman Alexie have expressed major doubts about just great the Kindle is,for example,it's cool to see one of the major literary players in the field talk about this,too:

Visit msnbc.com for Breaking News, World News, and News about the Economy

I had a bit of a debate online recently,at Booksquare,regarding e-books that didn't go very well. To be fair,I wasn't the most gracious commenter(I referred to e-readers as a "shiny new toy" and a Tonka product as well)and probably didn't make some of my points as succinctly as I could have,but my dander was up at some of the statements made in the article and I felt like fighting back.

What got me so riled up was the section of the post regarding the delayed e-book release of Under The Dome(it'll be available online by the end of December)and Stephen King's support of that,in his words-"“It’s time to give the smaller bookstores a little breathing room (although not much chance of that, with Walmart offering Dome for nine bucks.)”

The lady writing the article thought it was "stupid" of both King and the publisher,not to mention knocking the ABA for not having a "serious and robust" e-book sales system,and had this to say about the practice of staggering e-book vs. print releases:

"When publishers justify this behavior by noting staggered releases have long been the norm (”that’s how we’ve always done it”), they discount the reader, especially the rabid, money-paying, willing to buy books reader. Yeah, I should be treated with deference. I should get preferential treatment. I want to pay for these books right now, not borrow them from a library or a friend, not buy them used". (Note,the sentences in bold are done so by me,to highlight what got me mad)

Again,I wasn't the best or the most polite speaker on the subject but I still stand by my statement that I don't see why releasing the e-book edition a little later than the print edition is such a huge deal. Since I've never used an e-reader myself or downloaded an e-book,I don't know all of the facts regarding this issue.

In general,as someone who has had to wait for a must-read/have book to be out in paperback or just out,period,isn't waiting part of the fun? I can reasonably see the need for protest if there's a ridiculous amount of time between the releases-several months instead of a few weeks,for example-or constantly changing due dates. Getting mad at the standard rate of release simply because you're not getting what you want exactly when you want it seems a bit immature,to me.

Also,as a book lover who does own more than one copy of a singular title(both classic and contemporary),I don't think it's wrong for publishers to assume that some readers will buy both the print and the electronic version of a book. Some people will always have an either/or stance about how they want their books and others will take it anyway they can get it. Maybe I'm old school about this,but so be it then.

While I have nothing against the e-book market or fans of it,I do have concerns about certain segments of society the world over being shut out due to economic conditions and the attitudes of a loud and angry few that insist that print is a dying format and everyone should all be in praise and service of the e-book.

The truth as I see it is this;while the publishing and the reading world will ultimately have to make some changes for this new literary outlet,it won't kill off the print book entirely.

The main reason for that is money-no matter how affordable or convenient it will be to own an e-reader and download a book,there will always be those who either can't afford or won't use it. Any smart business knows how to keep the profits rolling in from all segments of the consumer base and despite whatever disagreements you may have about the publishing industry,there are plenty of smart people at the helm there.

Not everyone who enjoys and promotes the e-book has such an antagonistic take on the subject;many of them are die hard readers who put forth their concerns and suggestions for improvement in thoughtful,articulate ways and we can all get along with each other. I just get irked at the notion that one set of readers are "better" than the other and should be deferred to over the rest. Just as video really didn't kill the radio star or TV watching banish the notion of going out to the movies,e-books and print books can co-exist and satisfy as many audiences as they each and both can.

I do think Grisham has a point about many book stores and publishers being shut down due to the advancement of the e-book's popularity but I also believe that several of them will adapt to the changing times and either successfully adjust to them or new ones will come along to take their place.

In conclusion,while things are rough all over for both readers and publishers alike,I still have faith in the power of the written word to triumph in the end. The technology may change but books and their hold over a reader will stay the same. The hurdles that new writers may be facing in the near future(or sooner than we think)to reach their audiences are as hard to climb as the ones in front of those who came before them,but just remember,folks-bookworms know how to crawl right under them to reach the promised land:

I am concerned but not overly so so far. That may change in the future though. I probably won't jump on the e-book train anytime soon unless they start setting them up like DVDs with bonus features (like video interviews with the author or clips from movies based on the book, etc).

I can't say that the big stores' price wars doesn't effect me because when shopping around for a book I want... make that need (I'll borrow from the library when I want one), I will pick up the cheapest copy I can find. It is a shame that it will negatively effect books, authors, and publishers later on down the line but unless I suddenly become rich and famous I (and a good majority of people) have to pinch those pennies till Lincoln squeals. On the flip side, the lower cost of books now have more people buying them...

The whole print format being killed off argument is rather narrowminded. True, I can see where some might think that but just because you have an electronic way to carry around your books, doesn't mean that it's going to make them obsolete. People still have house and business phones as well as cell phones don't they? Not a great example but still. I've never used one of those Kindle thingies so I'm not sure how they work but I'm assuming that since it's electronic there is a way for it to get damaged beyond repair by simply getting water in it or the books themselves could accidentally get deleted? Can't do that with a print book.

Loved your Veruca Salt argument by the way.

Thanks,Lady Tink-I didn't think of that silver lining of more folks being able to buy the books they wanted to read with these crazy discounts,but yeah,it certainly be helpful when holiday shopping season starts.

Oh,and thanks for the Veruca Salt appreciation(that song kept running thru my head for days!)as well:)

I personally prefer having a book in my hands yes like rory I like the smell of my brand new book. Technology is great but it shouldn't replace everything there are just some things that are better done without technology.