Twilight New Moon tie-in mania is on the rise

As the release date of Twilight:New Moon draws near,the increase of merchandise associated with the series has grown to incredible proportions. While some of this stuff is to be expected with the success of the films(along with a strong boom in vampire lore within the pop culture in the last couple of years),a few of these advertising venues are rather off the beaten path of the usual commercial haunts.

The target audience that big ad campaigns like this tend to seek out are teens and the hopefully open wallets of their parents. However,a few of these Twilight items seem to be very crossover friendly to the older Twihards in the crowd as well. 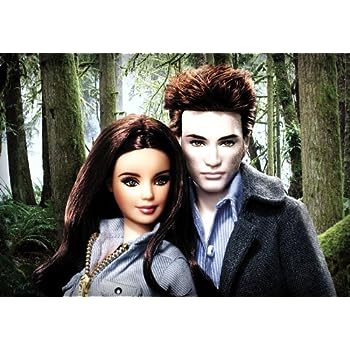 For example,let's look at the dolls-while the Twilight Barbie and Ken version of Edward and Bella may be something a teenage girl may want on her shelf,it's the diehard Barbie collectors who will be snatching them up as well.

The Neca Twilight action figuresare in the reasonably priced range(Edward alone goes for around $15)and are a bit more lifelike in appearance. That company also caters to more of a mature sci-fi/fantasy/video game crowd of customers,keeping the casual and the committed supernatural fans in touch with one another.

Also,even if the economy was a thousand times better than it is right now,not many average fans of the Twilight saga would be able to snag the Tonner versions of Edward,Bella and Victoria(the lowest price is for Bella,at $140). As much as I liked the fella who played James in the first film,getting a $179 price tag version of him is rather much indeed. 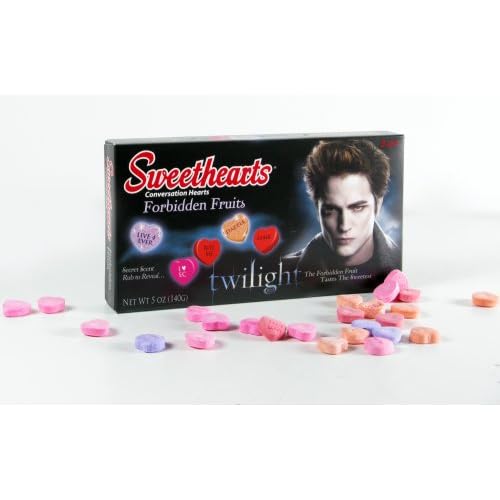 Candy is easy on the budget,so picking up a box of the Twilight themed Sweethearts conversation hearts entitled "Forbidden Fruit" would be good while you wait in the movie theater lobby.

A friend of my sister's sent me an Edward box as a gag gift(they are not Twilight fans,needless to say)and it's not much different from the regular chalky candy hearts given out for Valentine's Day. Yes,they do have sparkles and Twilight appropriate phrases like "bite me" and "soul mate" but if you're not into Sweethearts in the first place,I wouldn't rush out and buy them.

I have heard of a Twilight chocolate bar called "Heart's Desire",which is based on the classic Sky Bar(this new one has three instead of four chocolate compartments filled with different flavored creams). That I would go for,as a serious chocoholic.

For a more substantial meal,Burger King has a whole New Moon package with Team Edward and Team Jacob water bottles,trading cards and even the tried and true Burger King crown itself. Maybe it's just me,but the fact that the majority of the Twilight characters wouldn't even order off of any burger joint menu(they prefer their meat extra raw,if you know what I mean and some of you do)makes this particular tie-in hard to swallow.

The oddest commercial tie-in to me is the Volvo;granted I am not a big car person to begin with and while interest in driving the same car as Edward Cullen does may help stimulate the economy,it just seems to be on the verge of fandom overdrive. Then again,lots of guys have bought Aston Martins to be like James Bond,so there may be a method to this madness after all:

In the end,most Twilight fans will get whatever tie-in product suits their style and budget. I prefer the small stuff(I own a Twilight pen picked up at a comic con last year)and while homemade objects of fan love are the best,there's nothing wrong with grabbing a mainstream goodie within your price range. Speaking of range,the soundtrack for New Moon just isn't the same without Paramore in the lineup. I get that they didn't want to be typecast but Death Cab for Cutie just isn't cutting it for me,angsty music wise:

Bella makes a good Barbie. Very down to earth looking but the Edward one is kind of creepy. I'd rather have Bella's truck than Edward's Volvo. There are tons of Etsy stores devoted to Twilight stuff.