News of J.D. Salinger's death spread like wildfire yesterday,with plenty of talk both online and off about his literary legacy. Salinger became the Greta Garbo of American writers with his "I want to be alone" attitude that lasted for over twenty years.

After reading his works,you could easily understand why-many of Salinger's characters were disdainful of the world such as infamous Holden Caulfield from Catcher in the Rye or Franny Glass,the heroine of Franny and Zooey. One of his most persistent themes was disaffected youth,a viewpoint that Salinger gave a microphone to,which has endeared him to readers of more than one generation. 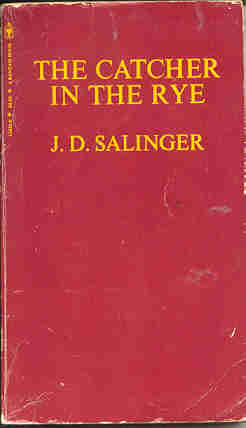 Catcher in the Rye is his most widely read book,despite numerous attempts to ban it from high school English classes,and the one people from all walks of life know best.It's never been made into a movie(Salinger refused to do so,due to his extreme dissatisfaction with My Foolish Heart, a 1946 Hollywood film adaption of one of his short stories)and probably never should be.

It's one of those novels that work better on the page than the screen,with the moody yet amusing monologue that Holden uses to paint a portrait of his reality being vivid enough in the reader's imagination to not need actors or special cinematography for it to come alive.

The strength of the novel's appeal through out the decades is partially due to Salinger's darkly keen observations of the people in his life and his ability to recreate them for his work,making them as recognizable to the casual reader as well as to his friends and acquaintances. He did make you feel as if you know someone just like one of his characters,one way or another:

Salinger attracted plenty of controversy over the years and not just due to censorship battles over his books. Two lone gunmen types that targeted famous figures(John Lennon and Ronald Regan)toted Catcher in the Rye around,claiming it to be part of their incentive to kill,giving CITR a rather morbid reputation.

Also,two memoirs by women in Salinger's life painted a less than pretty picture of him as a person. While I didn't read his daughter Margaret's book Dreamcatcher,I have read At Home in the World by Joyce Maynard,a novelist in her own right and yes,I believe her and admire her emotional courage in making the details of her troubled relationship with Salinger known.

She received a lot of flack for that by those who felt that she was casting a bad light on Salinger for her own gain but let's be real,folks. If you look at the true history of many great artists in any field,you'll find that a vast majority of them were awful people who treated their loved ones terribly.

As much as I adore many of Charles Dickens' books,he did disrespect his wife by openly lusting after one of her sisters(even to extreme narcissistic levels by mourning her premature demise for years afterward)and abandoning her later on for a younger mistress,plus retaining another one of his sisters-in-law to keep house for him! That's just one of many examples of a renowned writer with a horrible personal life and whether or not J.D. Salinger is in that league of writing,he and Dickens both had bad ways of dealing with women in their lives in common. I don't wish to speak ill of the dead but if you're going to embrace the sweet,you have to accept the bitter as well. One thing that is never in dispute about Salinger is his influence on writers and the many who were and are drawn to his unique style of short story telling.

Folks like Philip Roth,John Updike,Jonathan Safran Foer,Susan Minot and Aimee Bender claim him as one of their muses and books such as A Heartbreaking Work of Staggering Genius and Everything is Illuminated seem to follow in a few of Salinger's footsteps.

Movies are not exempt from his literary watermark,despite his contempt for Hollywood. Director Wes Anderson shares many of the eccentric touches that Salinger had for creating upper class families with stylized dysfunction in movies like Rushmore and The Royal Tennenbaums,which in turn influences others down that same path of oddly real storytelling,sort of an unintentional vicious circle:

In the end,Catcher in the Rye is the one thing that J.D. Salinger will always be remembered for. Not such a small legacy to leave behind there. Catcher in the Rye will be talked about and analyzed for many more decades to come,having achieved the ultimate artist's goal to create something that lasts beyond their lifetime by keeping a finger on the pulse of common human experience and hold up a mirror that reflects it accurately for readers past,present and future. Whatever becomes of his personal affects and writings left behind,Salinger is destined to be an immortal of literature,if not to be beloved:

I know it's a bit over dramatic, but I almost cried when I found out. JD Salinger was responsible for getting me through some of my Holden Caulfield moods.

Mr Antolini said, "Many, many men have been just as troubled morally and spiritually as you are right now. Happily, some of them kept records of their troubles. You'll learn from them - if you want to. Just as someday, if you have something to offer, someone will learn something from you. It's a beautiful reciprocal arrangement. And it isn't education. It's history. It's poetry."

True then. True now. And always.

Unrelated to your post today...but I saw this link and thought of your blog...http://www.quirkclassics.com/index.php?q=calling-all-bloggers.

I've never actually read Catcher in the Rye but I really, really should sometime soon!