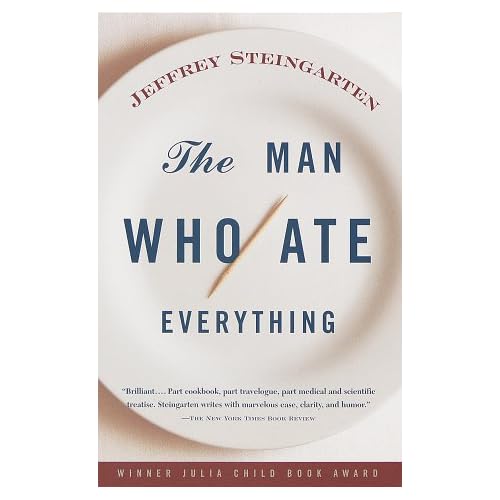 As I've said before,tough critics on any competition show tend to be my favorites-most of the time,they're the only ones willing to tell the truth about what the contenders have or don't have in terms of talent and are bluntly brilliant when it comes to pointing out flaws in presentation.

So,when The Man Who Ate Everything and It Must Have Been Something I Ate both became available on my Booksfree list,I was a happy camper indeed. Jeffrey Steingarten is the author of these tasty little tomes,which feature his food adventures as a culinary critic for Vogue. He's won numerous awards for his writing about food,including being made a Chevalier by the French back in 1994 in honor of his work involving French gastronomy.

It was TV that first brought him to my attention;Steingarten is a frequent guest judge on Iron Chef America and was even added to the panel for the second season of The Next Iron Chef as well. His cultivated yet at times cankerous opinions about food have made him a Simon Cowell like figure in this realm and love him or hate him,some of the best ICA battles have him on the sidelines.

The thing about Jeffrey's appearances on various Food Network shows is that he is certainly not shy about expressing his opinions about the way certain edibles should be prepared,served,etc and more than willing to debate with his fellow judges to defend his point of view(he'll even take on the Iron Chef in question,if need be):

After hearing and seeing him for so long,getting the chance to read his books was a pleasure I fully savored and am already enjoying. Granted,Steingarten's essays about finding the best way to make bread and the validity of basic food plans for the average person are not light reading but his determination to reach the answers to his questions regarding this epicurean notion or that does have it's charms.

His introduction to The Man Who Ate Everything talks about the food fears that Steingarten felt he had to at least try to conquer before taking on the role of food critic and his list of least liked dishes included such everyday items as anchovies,clams, cranberries and lard,plus a few exotic ones such as Greek cuisine,kimchi and falfel.

Openly admitting your food prejudices is a great way to break the ice with anyone,in my opinion,and as a somewhat still a bit of a fussy eater myself,it's completely humanizing(plus,no one really trusts blue food,anyway): 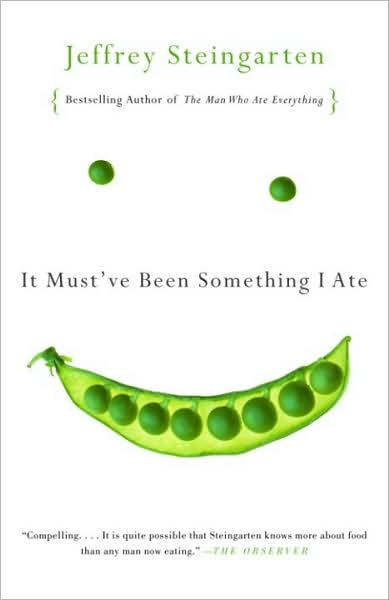 Reading his essays has been quite an education so far-did you know that grapes can used to make natural yeast for bread? Or that the key element to the best tasting bottled water is salt? I finished his chapter regarding fruit ripeness last night and there's more science spread about in those pages than in one of my textbooks from high school,only better written and a hell of lot more interesting.

Steingarten's sense of humor is subtle,verging on snark at times,but it does flair up as the perfect seasoning for such moments as his request for chemicals from a warehouse in order to experiment with recreating designer water.

Not only did he wind up quoting from Hamlet after one of the people he dealt with called him "crazy",he even offered to relieve their worries regarding his getting sick from their products by testing his results on his puppy instead(no,he wasn't really planning to do that and didn't even own a dog). The clerks were freaked out at that,but I'm sure they had a great work story to share with their friends from that encounter.

Jeffrey Steingarten is obviously not everyone's ideal of a delightful dinner companion but the man does truly love the subject he writes and talks about,as well as speaks from knowledge,two things that I respect. In a way,Steingarten is the Roger Ebert of food criticism who would be best served by finding the perfect Siskel to round out his culinary appeal. Perhaps that will happen one day but in the meantime,I'm willing to listen and learn as he serves up plenty of food for thought solo:

Is your name living read girl a play on living dead girl?

Yes,it is-at one time,I was trying to write a paranormal mystery novel with that as the title. The book didn't get very far but the play on words was still haunting me so it came in handy when I needed a name for this blog.

I'm not a big Rob Zombie fan,btw-I do like the song and think he's an interesting film director-however I think the title fits my offbeat style here:)

i don't understand how a man who prides himself on his culinary expertise doesn't know how to use a fork. It's not a shovel Jeffrey.