Are fashionista follies more interesting as fictional or reality entertainment?

While many of the big Oscar winning and nominated films on DVD have long waiting lists for rentals,one overlooked by the Academy flick that received quite a bit of pop culture curiosity will be my latest Netflix one to watch. The September Issue is a documentary about the behind the scenes flurry of activity that went into creating the 2007 fall issue of Vogue magazine,the high point of fashion coverage for the industry.

A major attraction for audiences is getting a gander at Anna Wintour,the infamous editor of Vogue who is considered to be the template for the coldly controlling boss Miranda Priestly in both the book and film version of The Devil Wears Prada. Wintour is like many mover and shaker types in big business,loved and hated by those who work for,with and against her,so seeing just how true the word on the street is about Wintour should be worth watching:

It's funny that fictional depictions of the fashion industry such as The Devil Wears Prada and Ugly Betty have lead the way to reality TV and nonfiction films about this stylish subject and now the fantasy version seems to be going out of fashion. Ugly Betty is now finishing out it's final season after being moved around from one time slot to another and while there was talk of making a DWP TV show for Fox,that plan has made it's way into the trash bin for good.

Perhaps it's for the best-while I adored Ugly Betty for the first couple of seasons,the never ending soap opera antics of the characters began to tire me out by the middle of the third season(not to mention that whimsy has a really short shelf life,especially when it's used as the major tent pole of any series).

The Devil Wears Prada may have given some devoted to fashion much displeasure over the less than dazzling look it gave to their world when it comes to interpersonal relationships but it did open a door into a very influential realm of commerce that affects just about everyone on some level for many of us who felt left out of that designer loop and found a way to connect to it.

Competition shows like Project Runway helped humanize the world of fashion design and for compelling workplace drama,truth is really stranger than fiction,folks. One of my guilty pleasures when it comes to TV has been The Rachel Zoe Project,which covers the life and times of personal stylist to the stars Rachel Zoe and her two assistants,the forever cranky Taylor and sweet yet occasionally emo Brad.

Rachel's dippy personality and "let them eat cake" view on the world is amusing but she does have a sharp eye when it comes to matching the right clothes and gems to her clients as well as cultivating those crucial connections with established and promising designers in the field. Too bad she doesn't take that tact when it comes to handling real life stuff like stressing herself out so much that she needed medical attention(turned out not to be life threatening but not a trivial concern either):

The most interesting and frustrating part of the show for me is the tensions that arise between Rachel and her assistants,many of which could be easily solved or avoided by direct communication. Unfortunately,Rachel seems to be allergic to making unpopular decisions or confrontations in that department.

A prime example is when a scheduling conflict required Rachel to leave one of her assistants at home while bringing the other to Paris for Fashion Week. Instead of simply choosing either Brad or Taylor,she sent out vague signals which lead to mind games which lead to disruptive disharmony that left a bad taste in everyone's mouth. Office politics may be dressed up differently but are still the same no matter where you go,apparently: 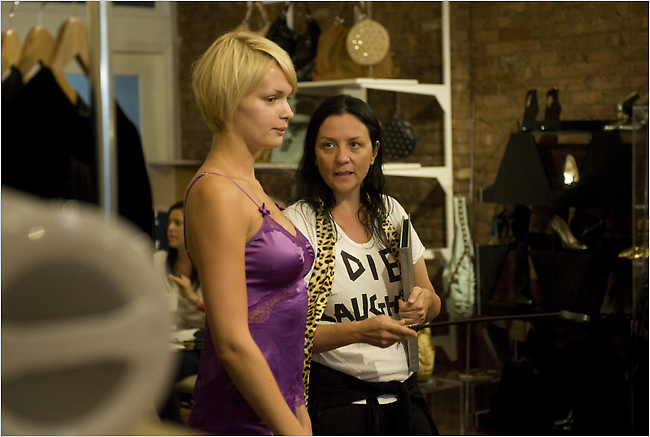 The newest fashion related reality show on the scene is Kell on Earth,which stars fashion PR queen Kelly Cutrone whose handling of her business is practically the polar opposite of Rachel Zoe. The flock of young assistants at her agency,The People's Revolution, seem to be divided up between Those Who Perform and Those Who Primp as dilemmas arise over setting up suitable gift bags for clients and how to organize mailing out invites to events.

I haven't watched this show much but every time I do tune in,I have to agree with Kell about how her newbies need to get it in gear. It may be old school thinking but common sense should tell you that Twittering about a job interview is not a good way to get hired and that it's expected of interns to know the basics of their work,not just the right foundation base for their make-up. The mini-dramas write themselves here,seriously:

Fashion is ultimately about the illusion of beauty but when the veil is ripped off and the heavy stitching that keeps that world together is revealed,there's a harshly glittering allure to it which is as in vogue as the newest couture line on the runways of New York,Paris and Milan. Even for the fashion challenged like me,this double sided mirror view of the glamorous world of wardrobe maintenance reflects upon us all in equal merit and measure: