When is cinematic child's play too hard to handle? 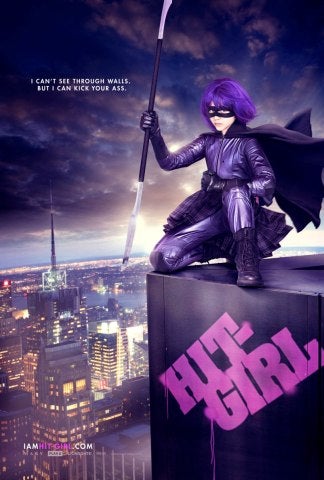 In reading the reviews for the new cult comic book adaptation Kick-Ass,all anyone could talk about was the character of Hit Girl,played by Chloe Grace Moretz. Hit Girl,aka Mindy Macready,is an eleven year old being raised and trained by her father(Nicholas Cage),a former cop, to be his sidekick as he goes on a path of vengeance under the superhero persona of Big Daddy.

Hit Girl is clearly the breakout star of the film and has raised some eyebrows along with cheers by those who find it shocking that a preteen would be allowed to fight and kill bad guys,plus utter curses that would make a sailor blush.

I find that shock reaction to be as authentic as Captain Renault's in Casablanca towards gambling at Rick's,since this is hardly the first time that someone under the age of thirteen has not behaved in a sugar and spice manner onscreen.

While I haven't seen Kick-Ass yet(I decided to wait to see it on my birthday this coming weekend),I am curious to see just how formidable this pint sized powerhouse really is. Her actions might not be age appropriate but then again,the movie is rated R for a reason,folks(some rough language ahead in this clip,you have been warned):

From what I have read and seen about the relationship between Hit Girl and Big Daddy,it almost sounds like a parody of the one between Leon(Jean Reno) and Matilda(Natalie Portman) in Luc Besson's The Professional back in 1994. Portman was about the same age as Moretz when she made her film debut as the lone survivor of a crime lord's "cleansing" of her family and seeks shelter with her lone wolf neighbor,who happens to be a professional hit man.

That odd couple pairing ruffled some feathers but many of the critics praised the film for the emotional arcs that both characters went through during the course of the story. The predatory precociousness of Matilda stunned both audiences and even the cool and collected Leon,whose social awkwardness made him vulnerable to her persuasive charms:

The last time that I recall critics getting this upset over a child lead was in 1993 when Macaulay Culkin starred in The Good Son. Parents and film critics alike were up in arms over the beloved Home Alone star playing a budding young sociopath who delighted in showing off his lethal habits to his innocent,recently motherless cousin(Elijah Wood)who had trouble convincing others of the evil in their middle class midst.

You could point out that it's a known fact that serial killers start their anti-social antics at a young age,so it's not entirely exploitative to have a junior league psycho as the focus of a thriller and that in some ways,The Good Son was a riff off of the classic B-movie The Bad Seed from the 1950s.

That flick tempered the violence of sinister sweet Rhonda Penmark with an ending that showed her being corporeally punished for her misdeeds in a "see,we were just playacting,everybody!" fashion. The Good Son didn't take that easy way out,which made it a more effective suspense story:

Over the years,I've seen kids portray underage prostitutes(Pretty Baby,Taxi Driver),street hustlers(Slumdog Millionaire)and even vampires(The Twilight series and Interview with the Vampire). Many times,the young actors and actresses have been praised for their convincing performances and being able to interact with more mature co-stars on nearly equal levels of acting ability. Sometimes,the plot of a story requires children to play crucial parts that echo the real life challenges that other youngsters have to face.

Does that mean that any questionable depiction of children should be done on either film or TV? No,of course not but these situations need to taken on a case to case basis. Is a necessary element to the plot to have this young person's character say,do or be placed in harm's way and if so,can it be done in a proper format for both the child actor and the viewing audience?

Some people were actually annoyed at Peter Jackson for choosing not to show the rape and murder of his teen protagonist in The Lovely Bones,which is shocking to me while Harmony Korine's pseudo documentary Kids had an "in your face" approach that many considered to be art as well as revealing the true behavior of unsupervised young people. While truth can be within the eye of the beholder,it is a mirror that can be adjusted more than one way to get your point across.

I must confess to some discomfort during Hostel 2,when the vagabond kids were being threatened at gun point and one of them was executed. A lot worse things were happening to the older characters on screen and while those not-so-nice to begin with young folk got their revenge by the end credits,that sequence haunts me still.

While I respect the concept of not forcing children to grow up before their time in fictional situations,the harsh reality is that many kids in the real world aren't given that option. Since children are considered easy targets by those up to no good and not always raised in happy households,to only have them play wholesome characters in films and television is a lie worse than Santa Claus or the Tooth Fairy. Sometimes for the sake of showing just how ruthless the forces of evil are,innocence has to be sacrificed for storytelling effect and to create a strong impact on the audience:

Hopefully,a day will come when kids can just be kids all the time and not have real or imagined threats to ward off. Until then,we just have to balance both the good and the bad influences on both fronts and take any off-color roles for young people in stride.

Quite a few stellar actors and actresses have had their start in rough and tumble roles such as Jodie Foster,Anna Paquin and Tobey Maquire who have proven that they could be anything they wanted to be and became the very best at being good entertainers. With any luck,Chloe Grace Moretz will join their ranks in the near future,if that is her goal,and she's certainly gotten off to a hell of a start.Negativity only encourages rebellion so it might be better to join the chorus instead of shutting off the music to steer young people towards calmer waters: