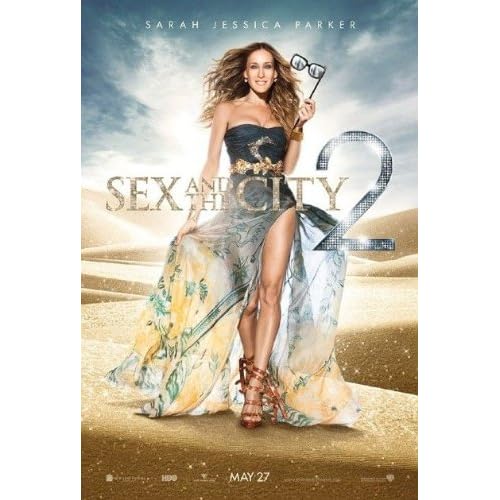 With Memorial Day Weekend being the first big summer holiday for folks to party down on,many of us will be heading to the multiplex and what is on the docket for the ladies?

Why,it's Sex and the City 2(sans Electric Boogaloo),which sends Sarah Jessica Parker and the rest of her glammed up gal pal pack off to Abu Dubai for some fun in the sun,as well as time off from their busy lives of shopping while being bored by marriage and family.

As you can probably tell by my tone,I am not a fan of this series or most of the empty headed films that are meant for the female friendly audience coming from Hollywood lately. Don't get me wrong,I enjoy a nice lighthearted movie where girls get to dress up and swoon over guys every once in a while(The Devil Wears Prada,Bridget Jones' Diary,etc)but the stuff we've been getting recently is thinly written and cheesier than a six month supply of Velveeta.

I won't begrudge anyone to needs to have their girls' night out on opening night with this flimsy flick,but hopefully a third time around the block won't be necessary for this franchise:

While faithful fans of SATC will flock to the theaters for this sequel,here are a handful of video rental suggestions for a girl power movie with a little more substance to it's style. Some of these you may be all too familiar with,but perhaps just one of them might be a pleasant summer surprise:

This sweet little 1994 comedy stars Kate Beckinsale as Flora Poste, a society girl who's been recently orphaned without a big inheritance. Her goal in life is to become a witty writer like Jane Austen,so she decides to stay with some of her rustic relatives out in the country in order to observe their odd ways but winds up giving the whole clan a much needed makeover.

For male eyecandy goodness,Rufus Sewell plays one of the country cousins with a roving eye for the ladies and for amusing offbeat characters,Ian McKellan is on deck as a would be preacher who warns his followers that there is "no butter in hell" to soothe their everlasting torment,plus Stephen Fry as a pompous local author who fancies himself in love with Flora. This quirky tale is based on a Stella Gibbons novel from 1922 and is timeless in it's entertaining appeal:

Speaking of Our Dear Jane,this ensemble cast(which also includes the late Lynn Redgrave in a brief part as a less than supportive mother)takes the wonderfully absorbing novel of the same name by Karen Joy Fowler and fleshes it out nicely.

Both the book and this 2007 adaptation showcases a group of women(with one interested in Austen male)living out their joys and woes in the course of a year and coping by reading the major works of Jane Austen.

The actresses on board here range from up and comer Emily Blunt as the slightly uptight French teacher who's never been to France to Kathy Baker,the lively spiritual mother hen of the group. Even if you've never read Austen,this film will draw you in and give you a crash course in rediscovering the charms of love:

Yes,this is another Brit flick based on a book(1922 by Elizabeth von Armim),but hey,if you find quality items while shopping somewhere once,why wouldn't you go back for more?

Miranda Richardson and Josie Lawrence star as a pair of small town ladies who take a dive into the unknown by renting a villa in the Italian countryside,with two other strangers,a glamorous socialite(Polly Walker)and a plucky matron(Joan Plowright).

It's a quiet and quaint story that nonetheless holds some lasting resonance for the viewer as well as the characters who soak in the outer beauty of their surroundings to achieve the inner peace they so desperately crave:

A real sweetheart of a sleeper,this 1995 film has grown-up best friends Demi Moore,Melanie Griffith,Rosie O'Donnell and Rita Wilson reuniting after 25 years to go over the good old days of their pre-teen years together.

The bulk of this film,however, is given over to their younger counterparts(played by Thora Birch,Christina Ricci,Gaby Hoffman and Ashleigh Aston Moore)who do a sort of Stand By Me for girls in experiencing the wonders and woes of young womanhood.

This is a lovely film that has all the tart and tasty delight of sipping lemonade on the porch during a warm afternoon while shooting the breeze with a good friend:

I hope this list is helpful to those seeking out some quality chick flicks and if you can't get into a matinee showing of SATC 2 this weekend,your best alternative is to rent Season Two of Absolutely Fabulous and watch the Morocco episode,which is where a good portion of the Sex and the City sequel was filmed. Trust me,there's not much of a difference except that the laughs might be far funnier here: