Are social class distinction dramas the next big wave to hit our pop culture shores? For the next run of Masterpiece Classic,starting in 2011,plans have been made to showcase a remake of the famed British made for TV serial Upstairs,Downstairs that was a huge ratings gatherer for PBS back in the early 1970s. It have five seasons and gained a worldwide following both during it's heyday and afterward on home video.

I was too young at the time to watch the show but had always heard about it. The basic plot of the story depicts the lives of the residents of an upper class home in Edwardian England,with a good portion of the focus being on the servants who worked there. Their daily strife and overall situations were contrasted with their employers,the well to-do Bellamy family,who seldom realized how their simplest choices affect those around:

This may appear to be on the surface a very old fashioned story to revive from the PBS vaults but some themes,like certain chic clothes,are timeless in their appeal. Putting away that old dress or concept for a few years may have been a wise choice at the time but when going thru your pop culture storage,it may be surprising to see what has come back into fashion.

With the turbulent economic times many of us are dealing with one way or another,reevaluating class struggles in a fictional forum can be very enlightening as well as educational.

We often look to the Brits for this sort of thing,since their molding of the social caste system is the standard go-to template here in Western culture. There was a time where such distinctions of rank were truly life or death situations,especially for working class women who were expected to keep their virtue under lock and key. Not that men didn't have anything to worry about yet in moments of crisis,women were usually the first to be thrown under the bus: Another interesting factor is the hierarchy set-up amongst the household staff,who take their positions in the scheme of things as dead serious as their bosses do their bloodlines.

Moving up or down the social ladder may have seemed a lot easier in that circle than in the realm of the rich and titled,however,resistance to change of any sort that threatens the status quo is a trait shared by both sets.

Rivalries and infighting over matters that would seem to be petty to an outsider are also shared habits by both sides of the social fence. One great equalizer has always been gossip;whether it's sought after or delicately spread to the right pair of listening ears,rumors and carefully whispered innuendo tends to be a universally currency that ties as well as binds these diverse ends of society together: One of the broader changes in the social order that Americans strove to change was that rigid class system,with some degree of success over the decades. While we don't have indelible lines in the sand that force people to stay where they started out in life,social mobility hasn't been smooth sailing for everybody.

Yet,we have made a lot of progress and one of them is making the working class folk just as important as their employers in TV and movies,giving them credible story lines and great one liners. Sure,there are still plenty of snobs out there but the best way to put them in their place is a clever comeuppance from the usually down to earth hired help: 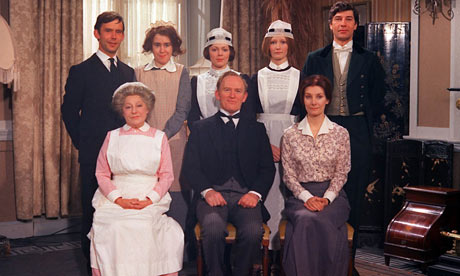 The new version of Upstairs,Downstairs is meant to be part of Masterpiece Theater's 40th anniversary season on PBS and reconnecting to that seminal series may be a real boon for longtime viewers and new ones alike.

As they say,everything old is new again and social sagas are no exception to the rule. Regardless of whether the tone is serious or satirical,social class stories do make an impression on audiences from all walks of life and sometimes,they're more needed than others to help folks find an even keel. Next to laughter,melodrama can be the best medicine or sweet relief from the stresses of day and that old English flair for such things never goes out of style:

I've never seen Upstairs,Downstairs but I remember hearing about it somewhere.

I'm currently on season 3 of Upstairs Downstairs and I'm really enjoying it:)