For the second Quickfire challenge on Top Chef:Just Desserts,the chefs were tasked to make a sweet treat using penny candy,which sounds like an ideal concept there.

Danielle went back to her childhood and made a grown up version of "worms in dirt" with a chocolate mousse and lemon gummy candy,plus malted milk balls and lemon soda on the side. That savvy sugar rush gave her the win and immunity,but her victory was quickly overshadowed in the aftermath of Seth's hysterics.

Seems that Seth's sorbet wasn't ready in time and wound up being served in melted form. He was planning his whole dish around sweets that his mom(who has some health problems)likes and when it didn't fully work out,Seth broke down before and during the judging. Guest judge Elizabeth Falkner even went over to comfort him at one point but he was pretty desolate over that dud of a dessert:

That could've blown over quickly but for the Elimination Challenge,everyone had to make a dessert based on a cocktail and pick their ingredients from behind the bar at Tar Pit restaurant(where the sweets would be served).

Seth freaked out over not finding pink grapefruit and wound up yelling at his fellow contenders,most of whom were just trying to encourage him to find something else to use. This guy is just making enemies all over the place and it's only the second episode,geez!

As to the challenge,Eric made it to the winner's circle for his pineapple upside down cake with bourbon,along with Yigit for his panna cotta with basil ice cream.

The big winner,however,was Ericka for her margarita "bomb"-a creamy creation with tequila mousse,lime cookie and creme brule with Grand Marnier.

Erika was particularly clever in her presentation of the dish,realizing that her fully rounded bombs were one short for service,so she sliced them in half in order to have enough for all.

In the Bottom Three was Seth for a blueberry gimlet cake that resembled edible clay,in my opinion,and Malika for her blood orange and blackberry mojito cake. It was way too sugary,which may have been due to yet another timing issue for her.

The one sent packing this time was Tim,for a basil pudding with orange and lime granita. The dish turned unappealing rather fast,becoming what most of the judges called "scrambled egg soup." Tim thought that might have been due to the brief brule on top of the pudding. Regardless,that pudding made tapioca look sexy in comparison.

Next week,a wedding cake must be made and hopefully,Seth will not be alone in his freak outs for this one. 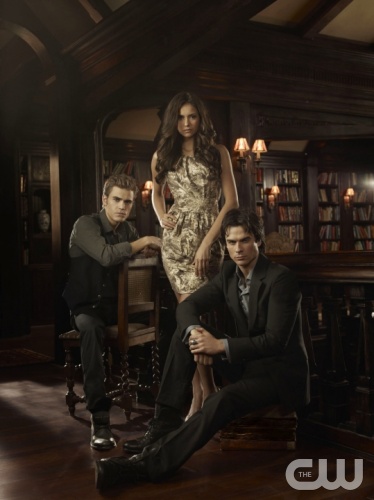 In addition to the regular batch of blood drinkers and witches on The Vampire Diaries,another supernatural menace will be making their presence known in Mystic Falls this week. Yes,it's werewolf time and our local pack will be made up of troubled Tyler Lockwood and his mysterious Uncle Mason,for now anyway.

One of the things that I really like about this show is that they don't leave the audience hanging for too long when it comes to introducing new plot points. Hopefully,the werewolf transformation scenes will come across much better than in previous prime time lupine outings(I adored Oz on Buffy the Vampire Slayer but in wolf form,the guy looked like a were version of a Planet of the Apes resident).

Also,I hope that the whole "werewolf bite is lethal to vampires" bit isn't a cheap way to wipe out newly vamped Caroline and cheat us out of a major mother-daughter confrontation moment to come: Speaking of daughters, Don Draper's little girl Sally unexpectedly showed up at his work on Mad Men this past Sunday. Sally is starting to grow up fast,which is displeasing her emotional freak of a mother(I don't care what time period it is,threatening to cut off your preteen's fingers if she dares to pleasure herself ever is beyond mental,folks),so she ran to her father to see if he would take her in.

Unfortunately for Sally,her dad is barely able to keep himself together let alone one of his kids(I suspect that if it was one of his sons,Don might seriously consider the notion of single parenthood for awhile there).

Between the divorce and having to see a psychiatrist before she hits the main level of adolescence,Sally is truly caught in middle with neither the rock or the hard place willing to take the lead in guiding her to emotionally safe waters.

Don's attempts to use new love interest Faye as a lifeguard here was another poor choice. The only one who seems to get a clue about what Sally's feeling is receptionist Megan,a very sympathetic soul that might make for a good stepmother in Sally's future-stranger things have happened!:

THE AMAZING RACE: Season 17 is set to launch this weekend,with quite a wild early challenge on deck. It involves aiming a slingshot and watermelons at suits of armor in a field,with one of the racers getting some serious blow-back right in her face. Granted,some of the people who enter this competition whine too much about the hardness of the tasks but you really have to give this poor gal a major pass in that department here:

I forgot all about TC: Just Desserts! Off to watch it now. Thanks!