Hopefully,This Book is not Overdue for a National Book Award nomination 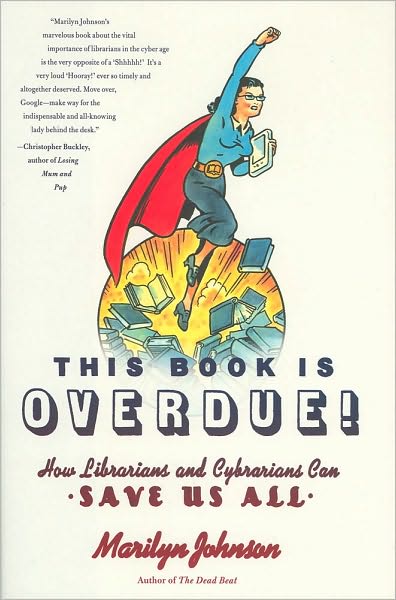 Nominations for this year's National Book Award will be announced this week and while I've already talked about my picks for the Fiction category,there is a nonfiction title that I'm keeping my fingers crossed for.

Normally,I don't get too worked up over that category,since it usually attracts massive scholarly works that rarely,if ever,wind up on one of my TBR piles.

However,with our local libraries suffering through increasing budget cuts and threatened with talk of being taken over by private interests whose take on the whole institution is about as warm hearted as Scrooge's views were on charitable causes,Marilyn Johnson's This Book is Overdue is truly the right book in the right place during a most crucial time for both librarians and patrons alike.

I have no idea whether or not This Book is Overdue was entered into consideration or not for the NBAs but it definitely deserves to be a contender.

Not only does Johnson talk about the struggles with funding and censorship that libraries are dealing with but the new and upcoming generation of librarians who are using their skills in the computer realm to expand knowledge and readership for all.

I did review the book when it first came out(now in it's fifth printing)and I can assure you that TBIO is both readable and easy to relate to ,even if you haven't stepped inside a library since grade school:

As a celebration of the success of Ms. Johnson's book(and with any luck,an early congratulatory party for a possible NBA nom),we here at LRG have gathered together some library themed videos,made by actual librarians,with a pop culture twist.

First up is from the McCracken County Library in Kentucky as they present the Adventures of Super Librarian! More powerful than a search engine,able to leap stacks of returned books with a single bound...you get the picture:

Next,Salt Lake County Library out in Utah gives a new patron a guided tour down the yellow brick road of their many services. This charming video was showcased at the American Library Conference back in 2007 and for any Wizard of Oz fan,this "Tale of Library Circulation" is a dream come true:

The gang at the UT Library in Arlington have a series of "I'm a Mac and I'm a PC" parody promos with "Librarian Vs. Stereotypes" that encourage folks to not be shy in asking for reference help. It's a fun way to get people to feel less tense about seeking assistance from librarians,plus who doesn't love a good gorilla gag?:

This librarian reinvention of Lady Gaga's "Poker Face" from the University of Washington Information school has made it's way around the internet for some time now but it would be a crime not to include it here. You can't have a party without music,after all:

Please hold a good thought for This Book is Overdue(which is due out in paperback in January of 2011) and even if it doesn't make the NBA cut,the book's message of library survival should ring out strong and loud for all to hear and attend to.

As we wrap things up,our closing number comes to us from the Central Rapphanannock Regional Library branches in Fredericksburg,VA and uses a refashioned version of the disco classic "I Will Survive" as it's fight song to rally the weary spirits of beleaguered librarians everywhere.

It is also a fitting theme song for Marilyn Johnson's book as well,in my opinion(and yes,there is a shorter version that goes right to the song but the longer one really brings the point about underfunded libraries home in a humorous way). Yes,Libraries Will Survive-they must,to keep our society intellectually alive:

Thank you for posting this!

You're very welcome,Melissa-keep fighting the good fight there:)