What type of Cinematic Cleopatra will we get this era?

Major buzz has been circulating lately about a new biography based flick about that classic Queen of the Nile,Cleopatra. Thanks to Stacy Schiff's new book about her(which has become a popular nonfiction bestseller),interest has peaked yet again regarding this fabled royal lady.

Schiff's book will be the foundation for the movie's screenplay and talk is that Angelina Jolie has been cast as the lead. There have been numerous debates regarding the true ethnicity of Cleopatra,which caused severe displeasure with the choice of actresses that have played her in the past.

However most historians agree that she was of a biracial heritage,so casting Jolie in this role might pass muster with the majority here. What is just as worthy of discussion here is what depiction of this famed ruler we'll be getting this time around.

Most of the earlier portrayals of Cleopatra,such as the 1934 Cecil B. DeMile epic starring Claudette Colbert,have showcased her in the glamorous femme fatal mode.

By focusing on the costumes and jewelry(the perceived by Hollywood edition of them) along with soap opera style plots,Cleo seemed to be more of a celebrity diva than one of history's movers and shakers.

Not that she didn't have quite the love life there but judging by some of these films,all Cleo seemed to have time for was showing off gowns while making hard romantic choices:

Speaking of bad romance,the love connections between Cleopatra and such influential beaus as Julius Caesar and Mark Anthony have been the drawing point for both stage and screen.

The 1945 film Caesar and Cleopatra was based on George Bernard Shaw's play and even featured highly theatrical actors in the main parts(Claude Rains and Vivian Leigh).

No surprise that the Pygmalion playwright chose to add a student/teacher vibe to the romantic mix between the springtime youth of Cleo and her December aged Roman lover. While there might have been a little of that in real life,something tells me that Cleopatra was savvier on that front than some wanted to believe at the time:

All of these stereotypes came to a head in the infamous flop that was the 1963 Cleopatra film that was basically a star vehicle for Elizabeth Taylor.

From her elaborate wardrobe changes(65 in total,with only Madonna's turn as Evita rivaling that number)to the gargantuan sets and underdone acting,this flick made Cleo to be nothing more than a flimsy excuse for a Halloween costume.

To make matters worse,Richard Burton was cast as Mark Anthony which brought all of Taylor and Burton's own on-again,off-again relationship baggage on board an already crowded big budget media barge. Talk about no way to treat a lady,especially a royal one at that:

Enough time has passed,fortunately,that allows for a bit more breathing room from that limited viewpoint and gives us a sharper appraisal of Cleopatra's place in history. The HBO series Rome,for example, included her in it's plot lines but gave Cleo credit for using her wits as well as her wiles in dealing with her political friends and enemies: 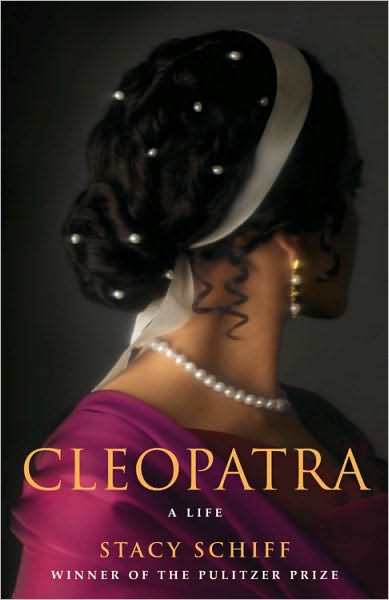 Perhaps we have a better shot at getting a truer look at Cleopatra's legacy from the upcoming adaption of Schiff's book,if too many liberties aren't taken in translation from page to script. It would be nice to see this regal dame get the respect she deserves on screen.

After all,Elizabeth I has gotten plenty of proper pomp and circumstance from both Hollywood and cable biopics within the last decade and surely Cleopatra is due her fair share of the pop culture spotlight. Even Marie Antoinette has had some of the falsehoods about her life and times stripped away from her image in fictional and nonfictional arenas(that whole "let them eat cake" line was a political ploy to blame her for the state of French affairs).

Hopefully,this latest Hollywood take on Cleopatra will give us a real history lesson and an entertaining story for our cinematic delight. Even if the final product is still somewhat lacking,there will be other writers bringing more stories about this ever living legend to life,thanks to the path that Stacy Schiff has marked out for them: