Checking out the cinematic blueprints of The Adjustment Bureau This week's big theatrical release is The Adjustment Bureau, starring Matt Damon as David, an up and coming NYC politician dealing with a major defeat who finds relief by falling in love with the mysterious Elise,played by Emily Blunt.

David's unexpected romance has some unexpected consequences,as he stumbles upon a strange group of men who claim that their job is to make sure that certain reality plans are kept to and his being with Elise alters the particular path that David is meant to be on.

David is determined to thwart their efforts any way he can,which also jeopardizes his intended lady love in the process: The movie has so far received mixed reviews,with the majority of them being on the positive side. The Adjustment Bureau does sound interesting,yet it reminds me of a few other flicks with similar themes.

These movies often seem to have a man realizing that his world is not what it seems to be and sets out to change it,often times motivated by the love of a woman,with a touch of sci-fi in there somewhere.

One of these films that came to my mind is 1988's Dark City,where Rufus Sewell's character wakes up in a hotel room to discover that he's accused of multiple murders yet he has no recent memories of anything at all.

It turns out that he is one of the many kidnapped humans trapped in a artificial construct of a city as part of an experiment by a strange race of men who need to tap into humanity's strengths to help their species survive. This movie is an intriguingly odd duck of a story,with it's blend of film noir,science fiction and metaphysics,and if you haven't seen it,Dark City is definitely worth the mind trip: A little more down to earth,The Truman Show was originally written as a sci-fi thriller but during rewrites,the tone was gradually switched into the reality show satirical drama that won it acclaim.

With Jim Carrey as the lead,most people were quick to assume that the film was an out and out comedy,which it is at times.

However,the collective talents of writer Andrew Niccol,the well chosen cast(especially Carrey,who many felt deserved to be nominated for Best Actor at the Oscars that year)and director Peter Weir all combined nicely to create a remarkable look at our increasing obsession with reality TV and it's dubious effects on society:

A few years later,Carrey returned to the unreal reality game with Eternal Sunshine of the Spotless Mind. As his character Joel keeps running into the quirky Clementine(Kate Winslet),he feels as if he's known her in some way before but not sure how.

After awhile,they both ultimately find out that they used to be lovers but after their break-up,each of them paid a corporation to have the memories of that time erased from their minds.

A good chunk of the story is told through the process of those mind whips,which can make the movie tricky to follow at times. Yet,that hasn't kept it from getting plenty of audience and critical acclaim there:

The Adjustment Bureau is rather loosely based on a Philip K. Dick story,several of which deal with the subject of manipulated reality. Hollywood loves to pluck them up for adaptation and next to Blade Runner,Total Recall is one of the better known.

Granted,Arnold Schwarzenegger doesn't seem to be the kind of Everyman hero that Dick often featured in his stories but when it comes to rock'em-sock'em action,Arnie certainly can deliver.

While his acting chops are not as impressive as his fighting skills onscreen,Arnold managed to make his character's awareness of being thrust into strange yet familiar territory pretty believable: 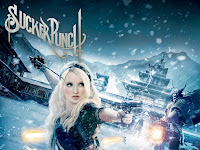 No doubt that The Adjustment Bureau will do well enough at the box office this weekend,given it's past predecessors have been profitable for the most part. One item of interest to me is that this sub genre appears to be primarily male centric.

Smarter folks than myself can analyze the whys and the wherefores of that much better than I can,however my surest guess on the reason for that is simply that men and women deal with such unusual circumstances in ways that appeal more directly to their internal instincts.

For example,women tend to take on reality shifts by turning them to their own advantage and harnessing the power of their imaginations to achieve victory. From Nightmare on Elm Street's Nancy to Babydoll in the upcoming film Sucker Punch,this fierce feminine formula tends to play particularly well on film. Sounds crazy,perhaps but sometimes what works for the goose isn't always good for the gander,gang: