After this latest sucker punch,are there any truly fierce fantasy females worth following?

A few posts back,I expressed some hope that the movie Sucker Punch would set a new tone for girl power on film but, much like the Detroit audience for Charlie Sheen's first night on tour,disappointment was to be had all around.

While I haven't seen the film myself,the wave of negative reactions from both critics and moviegoers alike all agree that was a clear cut case of bait and switch which backfired at the box office big time.

Pop culture promises have been made and broken before but it's extra sad to see them crumble in the hands of a promising talent like Zack Snyder and in particular for the actresses on visual display here. Sucker Punch is already being called one of the worst films of the year,which should means that it should do as well at the Razzie awards next year as The Last Airbender recently did:

With the silver screen a bust for solid leading ladies in the fantasy department for the moment,perhaps it's best to see what's available on that frontier via the small screen.

The HBO miniseries A Game of Thrones does have a strong amount of major males on deck here yet there are a good number of interesting women included in the various story lines who appear to hold their own with the fellas and then some.

One of the women to watch out for here is Daenerys,an exiled princess severely dominated by her vicious brother who gains her own power and self esteem through an arranged marriage. Her growing sense of personal liberation from the expectations of others is a vibrant thread that will connect many of the far flung players together and they will find a most unexpected force to be reckoned with: 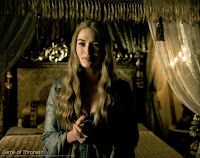 Other ladies of distinction in GOT include Catelyn Stark,whose determined devotion to her husband and children know no bounds,and her two daughters,Arya the rebellious tomboy and the soft spoken Sansa.

However,literally reigning above them all is Queen Cersei Lannister,a woman of dark secrets and motivations. Her ambitions for her family line run deeper than anyone,even her too close for comfort brother Jamie, knows,which makes her a truly dangerous foe to face: 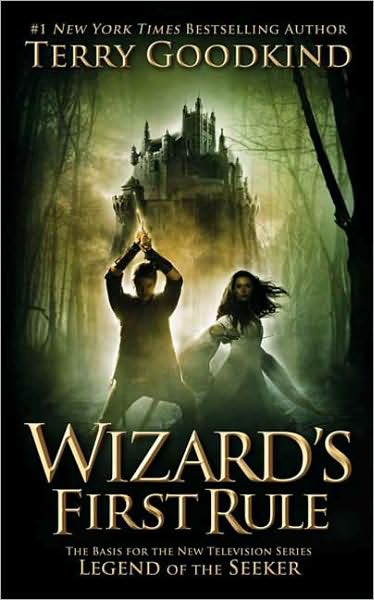 One element that may turn off a few viewers are the occasions of sexual violence that crop up,which many claim are much better handled in the series of books by George R.R. Martin than in some other sword and sorcery sagas such as the Sword of Truth titles by Terry Goodkind that became the basis for the short lived syndicated TV show Legend of the Seeker.

Since I've only read the first book in the SOT series(and in the midst of the second one while reading Game of Thrones as well),comparing and contrasting these works in that category is not a debate that I can enter without a little more solid grounding.

In general,however,it does appear that in both series that physical violations against women are something that only the bad guys engage in and receive no honors for. One of the things that drew me to watching Legend of the Seeker,for example,was the numerous powerful females who seem to outnumber the men quite a bit there.

Yes,there are wizards and war lords but those with the most emotional and mystical power are the women,from the Confessors to the Sisters of the Light and their deadly counterparts,the Mord Sith and the Sisters of the Dark. At many points throughout the second season of LOTS, Mord Sith Cara and Mother Confessor Kahlan have to work together to save the day for their friends and a formidable pair to reckon with they are:

Granted,that was an adaptation which was far more watered down in terms of objectionable content than Game of Thrones will be on HBO. Yet,some of the strength shown by those female characters,for good or ill,didn't all come from the screenwriters alone. A great deal of that can be rightly attributed to the source material,whether you like it or not.

I won't be completely surprised if some people find fault with the portrayal of women in GOT,no matter how reasonable it may be within the course of the plot and the medieval like time period in which the story is set. What I would advise for those who do not to be too quick to assume that righteous payback won't be handed out by the ladies who were wronged,one way or another.

Not that it's the only reason a character should deal with any brutal assault;like most trials and tribulations,it's how one deals with such things that counts in the end. True strength can come from choosing not to seek bloody vengeance but sometimes that isn't the best option.

Fantasy heroines have more than one path to victory,just like the heroes,and if necessary taking matters into their own hands is a very viable option.The worlds of Game of Thrones and Sword of Truth/LOTS are very different from each other but no doubt each would agree that a good woman can't be held down for long and that payback can truly be a bitch indeed: