TC Masters have a six course love fest,Game of Thrones' triple throwdown and a double Sanjaya for Haley

A most intriguing test of their basic skills was given to the six remaining contenders on Top Chef Masters this week,as their Quickfire challenge was a relay race of sorts that showed just how keen their sense of taste,smell and touch were.

Blindfolds,nose plugs and ear phones had to be worn at different times and then the chefs had to write down what they thought their food items were,with the lowest scoring person having to sit out the next round.

For the last two players,the test was sound. They had to identify such everyday food noises as Rice Krispies in milk(which neither of them got),breaking celery and buttering toast. Hugh emerged as the winner and received five grand for his charity but immunity is no longer on the table from here on out.

The Elimination challenge had the chefs make a six course "Date Night" dinner for several couples,with the secret focus of the food being on the relationship between Chris and Victoria,who have been together for four years. Chris planned to propose to Victoria at the end of the dinner and it was a truly romantic moment(she said yes,folks-thank goodness!).

Each chef was responsible for one course and all of them sat down with Chris to go over some of the highlights of their romance and any food connections that could be made to their love.

Floyd was very inspired by his own romance with his wife to make a dish that was a big hit in one of his own restaurants.

The "Karma Sutra" shrimp was served with black pepper along side watermelon with a touch of lime and mint. Despite the strength of the pepper,the conjoining of the shrimp was a palate pleaser that put Floyd in the Top Three for this round.

Joining him was Mary Sue,for her mussels and clam stew with sausage. It turned out well,despite her slicing off the top of her thumb during prep that fortunately didn't hold Mary Sue back for long.

While briefly returning judge Gael Greene was concerned that the extra large crouton would be a little too crunchy for a romantic meal,the stew was a savory delight.

The winner,however,was Naomi for her chicken thigh with sweet potatoes done two ways. The chicken was first braised then oven roasted to crisp up the skin nicely,which the other visiting judge Gail appreciated quite a bit.

On the opposite end of the kitchen,Hugh was called on the carpet for his strip steak that was too chewy and served with a giant onion ring meant to represent the bracelet that was one of the first gifts exchanged during Chris and Victoria's relationship.

The food was pretty basic and uninspired,which the judges pointed out to Hugh whose response was "It's not like we were cooking for gourmets here!" That caused Curtis Stone to raise an eyebrow and ask,"Do you think cooking down for people is good?" In Hugh's opinion,sometimes that is-talk about your appetite killers,yesh!

Meanwhile,Traci's apple galette wasn't doing her any favors. The tart was dry,with only a small scoop of creme fraiche and the phrase "Je T'Aime" written on the plate in caramel sauce. Granted,that saying was a key one in keeping with the theme but the whole dessert needed a bigger touch of love than that.

Sent home was Celina,who took a rather literal take on her course. Since Chris and Victoria made it a habit of theirs to have beer and pretzels at every sporting event they went to,Celina thought that making a pretzel with a beer mustard sauce on the side would be a fun idea.

While she earned kudos for making those pretzels from scratch,it was the salad that was also added to the side that threw the entire plate off kilter. Pretzels and salad just don't go together;an apple sardine sandwich would have more harmony.

Next week, the chefs get a taste of weird science and some microwave love-getting a little high tech heat here!

Many of the fans watching Game of Thrones have been waiting for a good fight scene and they were treated to three of them during the last episode. The first one was between the Clegane brothers better known as The Hound and the Mountain.

When a swift trick by his opponent caused him to lose the joust held in front of the king,the Mountain took fast and furious revenge,giving his brother no choice but to try and stop him. That bout was something to see but the most tense showdown was between Ned Stark and Jaime Lannister,over the impromptu capture of Jaime's brother Tyrion by Lady Stark. It's a pivotal moment in the plot that promises to lead towards more gruesome ends for more than one person involved. 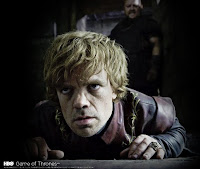 My favorite of the three,however,is when Tyrion gets a chance to fight during his captivity trip with Lady Stark and company. While he may be a Lannister,Tyrion is too smart(as he himself points out)to plan the murder of young Bran Stark and arm the assassin with one of his own weapons,so I have some sympathy for him at this juncture.

Since he's also underestimated due to his size,it's cool to see Tyrion show just how formidable he can be in a physical confrontation. While he's still in a world of trouble at the moment,Tyrion did show Lady Stark that sometimes a low blow is the best one to make:

The Final Three performed three songs on American Idol last night,with James Durbin sadly not being amongst them. Instead,Haley kept her spot and gets a very special honor from this blog for her persistence. She is the first AI contender to receive two Sanjaya awards for worst number of the evening.

Never mind her stumble during the contestant's choice song-Haley made a more awful moment to remember when she sang her producer's choice,"Rhiannon" by Stevie Nicks. It wasn't enough that they cranked up the fog for her on stage or that Haley wore a grey Grecian Goddess dress to give her an extra airy-fairy appearance.

The wind machine was what put the whole number into a whole other orbit. Haley looked more like she was auditioning for a road company version of Xanadu than competing for the top prize on Idol:

WINDY FOR ALL THE WRONG REASONS

NO SPECIAL EFFECTS NEEDED FOR STEVIE

For the judge's choice,Haley was assigned "You Oughta Know" by Alanis Morrisette. I recall in Idol seasons past that each one of the judges chose that song for only one of the last three contestants.

This seemed to be a group decision,which makes you wonder why Scotty and Lauren had well known country songs while Haley got a hard rock/pop tune. Hmm,a little obvious insight into who the judges want to see in the finale,perhaps?

Anyway,giving Haley this song was a bad decision. The beauty of this angry ballad is the slow yet steady rise of righteous fury as the singer brings forth the smoldering power of a wronged lover right in the face of her unfaithful lover.

Haley comes across as being miffed that the mall's about to close in five minutes. Sorry,sweetie but some things just can't be faked:

YOU OUGHTA KNOW THAT YOU'RE NOT RIGHT FOR THIS SONG

FEEL THE FLAVOR OF THE FURY

THE NEXT FOOD NETWORK STAR: A new season starts up in June and I swear that one of these budding chefs looks like Nora Dunn from Saturday Night Live. I'm still not sure if it's really her or not,which is one of the reasons I will be checking this out: