With many people holding parties this weekend using the theme of the alleged apocalypse scheduled for tomorrow,I thought it was my pop culture duty to at least offer up some suggestions as to the proper music for this occasion.

Now,my intention is not to mock anyone's faith or beliefs. Given the erratic times that we're going through at the moment,it's not surprising that some might think our time is running out here.

However,I'm more of the "glass is half full" mindset when it comes to things like this and am willing to stick it out until we flip over to the better half of the record,so to speak. Too many media delights to look forward to ,such as the last Harry Potter,a new season of True Blood and the rest of those Game of Thrones books to read, for me to throw in the proverbial towel just yet. Anyhow,let's get this party started right with the time honored end of days classic,Prince's 1999. While that predicted doomsday date has come and gone,it's still recognized as the best toe tapping tune for any imagined final farewell celebration.

The song is mostly an automatic New Year's Eve standard but it's as perfect as perfect can be for a last blast party. I wonder if anyone has thought to put this song in a time capsule-nice to think that future generations will have something to rock out to during their scientific studies of the past:

For those of you in a Ghostbusters mood who wish to choose the form that the Traveler will take,may I suggest a very gleefully vengeance driven Dr. Horrible? His plans for a Brand New Day upon his hated rival in love and super hero warfare Captain Hammer are rather chilling,not to mention his marvelously melodious singing voice: 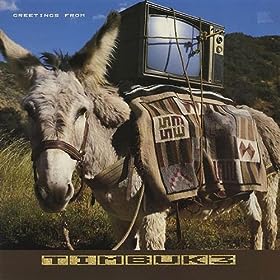 For a sweet touch of irony,Timbuk 3 and their one hit wonder The Future's So Bright(I Gotta Wear Shades) was practically destined to fill this slot.

Plenty of graduation parties have been liven up by this laid back look at the best yet to come and should provide a nice mellow cool down on the dance floor there:

Now,it's only fitting to pay tribute to the after world on both sides of the celestial spectrum. Regardless of what you do or don't believe,most people agree that there's a good place and a bad place for all souls to end up in.

On the good side, we have Belinda Carlisle promising that Heaven Is A Place on Earth. Who better than a former Go-Go to give us encouragement to walk down the sunnier side of the street,especially if it's far away from those creepy kids in masks and choir robes who sing in the background of her video here.

While this may not be quite the ideal harps and clouds number,the song is certainly upbeat enough.

For the other worldly hot spot,you have to head straight for the heavy metal section. This isn't as easy as one might think,given that countless bands have jumped on this particular bandwagon for several decades. The choices are nearly never ending.

Yet,when you whittle your selections down on basis of quality,only a few true artists in this field remain. Emerging from that battlefield in triumph to contribute to the festivities,Iron Maiden's Seventh Son of a Seventh Son album holds many wicked delights.

My personal favorite is The Evil That Men Do,a saying that hasn't lost any resonance since the day it was first uttered:

What about a bid for clemency,you may ask? Shouldn't we select a musical spokesperson to plead our case for continuation as a species to the Powers That Be? Certainly there have been enough movies and shows with this concept at the core out there to help us with this.

In that case,the right person for the job is Olivia Newton-John,who is no stranger to the role of divine emissary. While her 1983 romcom reunion on screen with John Travolta in Two of a Kind was an epic movie disaster,from the ashes of that cinematic failure came the successful song Twist of Fate.

The fact that this tune survived while Travolta's career went into exile for years afterward is a sure sign of ONJ's miraculous musical skills. Who better to request an encore for the world, I ask you?:

No matter what happens this weekend,I hope you all stay well and happy. If any concerns about the fate of the world arise, just keep in mind WWGGD(What Would GaGa Do?)and do what comes naturally,folks-just dance!: