Will Thor herald in a new age of deities on the pop culture scene?

Hitting many a multiplex this weekend will be Thor,the Marvel comic adaptation that turns the Norse god of thunder into a superhero.

The legendary mythological character has been in the comic book realm since the early 60s and has made appearances before in animated TV shows(mostly in guest star spots),plus plans are under way to include him in the upcoming Avengers movie due out next year. That's quite a load of expectations there,especially for a god.

However,the film does look promising even with the hard to avoid touch of cinematic cheese tossed into the proceedings. Thor may prove to be worthy of worship at the box office,indeed: In anticipation of Thor's mighty hammer throw into the pop culture pond,let us take a look at handful of other gods and goddesses who have crossed over into the live action circuit and made their marks upon it,for better or worse.

First up is Isis,DC Comics' take on the ancient Egyptian goddess as Saturday morning school teacher/super heroine. She was later incorporated into the print comics but got her start on TV,endearing this deity to many budding mythology fans.

Her cult status was strong enough to merit an appearance on Smallville this season(altho in more of a villainess form)and perhaps she'll return someday to reclaim her small screen throne for a new generation:

Of course,having a god arrive on Earth isn't always a positive experience. The guys from Ghostbusters found that out in their first film,as Sumerian shapeshifter Gozer the Gozerian came forth to begin it's reign of destruction.

The most important lesson that the Ghostbusters learned in this otherworldly encounter is that when a scary supernatural being asks you about your godhood status,it's best to say yes: 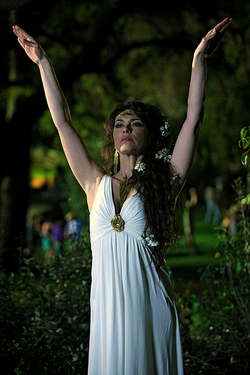 Even trickier to deal with than an actual god is their determinedly demented followers such as Maryann the mad maenad on season two of True Blood. Her ultimate purpose in life was to conquer up Dionysus,the bull headed god of debauchery,via blood sacrifice and the spreading of madness amongst whatever local population was on hand to serve her.

Fortunately,Maryann's fervent devotion offered up the right moment of vulnerability for those not under her spell to stop her in time. It wasn't an easy thing to do neatly yet sometimes you have no choice but to break a bloody egg or two in order to save the day:

Defeating a god directly is a lot harder,as Buffy Summers came to realize. Exiled hellgoddess Glory was truly hellbent on getting back to her original plane of existence any way she could,provided the Key that unlocked the dimensional doorways was hers to fatally turn.

In the end,only magic and the frail human form she was trapped in was enough to halt Glory in her tracks but not before the mystical floodgates were opened that threatened to destroy all worlds. Sadly,Buffy made the ultimate sacrifice which gave that victory all the more bittersweet:

Not all summonings of the gods have to be sad occasions,however. The calling forth of the muses in Xanadu,particularly Kira,the chosen nom de plume of Terpsichore,the goddess of dance,is one of the memorably amusing highlights of the movie.

Kira did a rather good job in inspiring her two charges,with the only drawback being that she fell in love with one of them. Sort of an occupational hazard,I suppose,one that most folks wouldn't dealing with at all:

Whether or not Thor does well in his opening weekend,the use of gods and goddesses on screens big and small should continue to flourish. One of their strengths is adaptability and they do tend to pop up when least expected and occasionally when truly needed to liven things up,even on the dance floor: