The Help has more to offer than hype 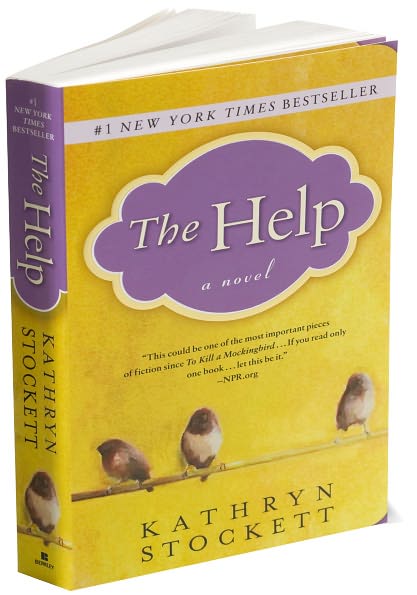 With the upcoming film version of Kathryn Stockett's bestselling debut novel,The Help,set to arrive at the multiplex by August,it seemed like high time that I picked this book up(via Booksfree)and see what all of the fuss was truly about.

As many of you already know,the story in set in the early years of the 1960s in Jackson,Mississippi where the lives of three women unexpectedly connect with one another.

Aibileen has been a maid in numerous homes,practically raising most of the children in her care and at times,giving them the love and attention that their parents are incapable of doing. When we first meet her,she is two years into mourning the loss of her adult son,Treelore,a young man with ambitions of becoming a writer.

Minny is a good friend of Aibileen,mainly due to her strong loyalties to family and friends. Her skills as a top notch cook and housekeeper are undisputed but Minny's feisty nature and outspokenness prevents her from holding a job for very long. Her most recent enemy on that front is Miss Hilly Holbrook,the queen bee of the local ladies' League whose sweet exterior barely hides the vicious venom of her soul.

One of Miss Hilly's friends happens to be Eugenia "Skeeter" Phelan,who has finally returned home from college and wanting more out of life than just getting married to the right sort of man. Skeeter has never quite fit in with her friends but her questioning nature drives her to consider the unspoken rules of their small world.

A major mystery to her is what happened to Constantine,her family's long time maid who was a second mother to Skeeter. By the time she finished school,Constantine was long gone and no one wants to tell her the straight story about that situation.

Skeeter comes up with a plan that catches the interest of a New York publishing executive,to write a book of interviews with black maids that tells the truth about their experiences working for white families. She approaches Aibileen first,who turns her down for awhile until agreeing to share her story and trying to recruit others as well.

Minny is especially hard to convince,mainly due to the very real fear of retribution. With civil rights marches,protests and the death of Medgar Evers a daily part of the news,the risk that's being run on both sides is a dead serious one:

Nevertheless,it's a local injustice perpetuated by Miss Hilly that spurs on other maids in town to join in on the secret book project. Even with the slim possibility of the book actually getting published,everyone feels that the effort is worth the trouble.

Change is in the air,particularly with the likes of To Kill a Mockingbird becoming a regular bedside reading staple.Each of the women have more than one motive in revealing the hidden life and times of maids-Skeeter,for one, hopes to find out the truth about Constantine.

Minny wants to get a lot of aggravation about the way things are off her chest and Aibileen is concerned about the influence she has on her newest charge,the daughter of one another of Skeeter's friends who is just learning about life and not getting much guidance or proper attention from her mother:

There's been a lot of controversy regarding this novel,mostly centered around the fact that the author is white and has her black characters speak in dialect.That really doesn't come across as a problem when you read this book;after all,differences in speech between characters are meant to reflect their background and it would ring false to have all of them talk the same way and style.

The Help is an addictive read,one of those classic stay-up-all-night-to finish-it books. While I didn't take it all in one sitting,I was awake until the wee small hours of a couple of mornings and had to force myself to go to bed. Not every book can do that for me but when it does,you know you have a great one in hand.

This story is not a merely a vehicle to discuss the civil rights movement in. It plunges right into the hearts of these women and the emotional obstacles in their path to personal freedom.

Minny's a formidable force of nature who has to handle an abusive husband while Aibileen is torn between her grief over Treelore and the connection she has to the little girl in her current care. Skeeter wants to be her own person but also please her disapproving mother and have the same kind of romantic relationship that all of her contemporaries seem to enjoy with ease.

This in depth development of the character's inner and outer turmoils elevates the story and makes it identifiable to readers of more than one generation and social status in life. The Help became a book club favorite for this reason and it's a book that does inspire talk in the best sense of the word:

While I don't know if The Help will achieve the same standing in literary history as To Kill a Mockingbird did,it is a noteworthy novel in the realm of Southern writing.

Hopefully,Kathryn Stockett will not follow Harper Lee's example and give us more books of the same caliber. I also hope that the film adaptation does the book justice,but even if it doesn't,The Help will still be standing on the shelves for a long time to come: