Which version has the most True Grit?

With the home video release of the celebrated 2010 remake of True Grit this week,I was finally able to see what all of the fuss was about regarding both films.

Awhile ago, I did watch the original 1969 adaptation of Charles Portis' novel,which is best known for John Wayne's award-winning performance as Rooster Cogburn,the cranky yet capable one-eyed Marshall recruited by young Mattie Ross(Kim Darby)to hunt down her father's killer.

As an initial introduction to this tale of old school vengeance in the Old West,the first take on it is certainly engaging,with a lot of John Wayne's crusty charms on display here. Glen Campbell as the pompous Texas ranger LaBoeuf comes across at times as the straight man for Wayne's antics as well as Darby's prim tough talk.

You do find yourself wrapped up in the search for the killer Tom Chaney which is meant to be Mattie's rite of passage into an adult world that she seems to be more than prepared(which many of the people she encounters find disconcerting). However, this edition of True Grit was clearly intended to be a star vehicle for John Wayne and on that level,it succeeds:

Wayne's performance was so popular with audiences that a sequel of sorts was made in 1975 called Rooster Cogburn with Katherine Hepburn as his co-star. A made for TV sequel was created a few years after that,casting Warren Oates as Rooster,which ended the ride for that character.

As much as I enjoyed the first True Grit,you could tell that this was a traditionally compromised Hollywood adaptation,not only to showcase Wayne's signature cowboy style but to suit the sensibilities of it's target audience back in those times. As beloved as it is,that taste of True Grit would've won more hearts if the filmmakers had dared to be a little more authentic: 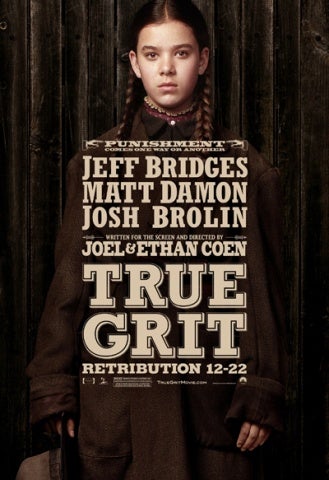 When news of a new version from the Coen brothers arrived early on in 2010,people were lined up to see how well Jeff Bridges would measure up to John Wayne as Rooster. Folks were taken aback,however,and pleasantly so at Hailee Steinfeld's turn as Mattie Ross,the true star of this show.

Joel and Ethan Coen,to their credit,chose to stay closer to the source material and in the novel,Mattie is the main driving force of the story. Steinfeld more than holds her own with the likes of Bridges, Matt Damon and Josh Brolin,she commands attention from the minute she appears onscreen.

Her combination of steady determination and subtle emotional resonance is what earned her that Oscar nomination and I won't be surprised to see her up again for an Academy Award but this time in the Lead Actress category.

Kim Darby's rendition of Mattie is nicely done but there are touches of cloying sweetness that slip in and one scene where she gets hysterical when caught in a natural trap that borders on annoying. Thankfully, Stanfield's Mattie is allowed to be stronger as well as vulnerable at times without watering down her true nature. 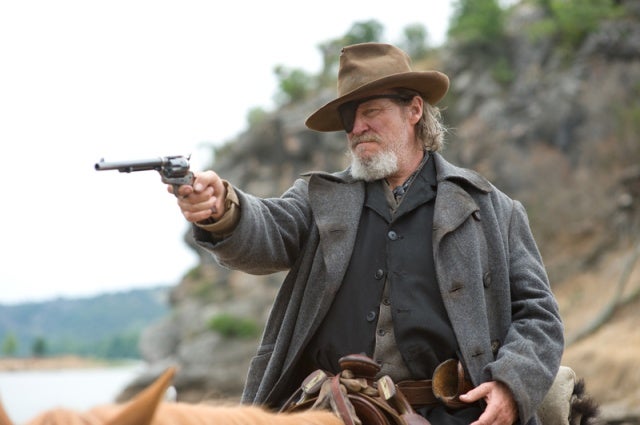 As for Jeff Bridges,he makes Rooster his own with his usual mix of laid back attitude and man on a mission stance. Matt Dillon does have a bit of the goofiness that LaBoeuf is known for but he is far better able to reveal the deep down sincerity of the character than Glen Campbell was in his debut role.

Overall,the tone of the newer True Grit is grimmer and way more down to earth than it's predecessor,which gives it a sharp distinction from the typical remake. This approach seems to work well with Westerns such as the 2007 revival of 1957's 3:10 To Yuma showed us and if you're going to do a remake,finding a different way to spin that story is a smart move,not to mention more artistic:

So,which one has the real true grit? No offense to John Wayne fans but this is one of those rare times in which the remake is superior to the original. The 1969 edition is worth watching,particularly if you've never seen a John Wayne movie but the one that I would want to see again is the Coen brothers' version.

That film has a firmer foundation for what the Western genre strives to be as time goes on and it's definitely the one you wouldn't want to get on the wrong side of. Hopefully,this will herald an age of sharply tuned tales that also let the ladies take their place as well as their aim at the center of the spotlight: