Being held Captive by Victoria Holt

Awhile ago,I picked up a boxed set of Victoria Holt novels at a local rummage sale,not having read any of her work before but being familiar with the author's name. Victoria Holt is actually one of the many pen names that writer Eleanor Hibbert used for her numerous books.

Two of her better known ones are Jean Plaidy and Philippa Carr,both of which were historical fiction titles(sort of a precursor to Philippa Gregory,if you will).

Victoria Holt,however,was a Gothic romance author who tended to set young women off on adventures that lead to mystery solving as well as true love. Last year,I tackled The Landower Legacy and this summer,The Captive is keeping me amused. The plot of The Captive is told from the viewpoint of Rosetta Cranleigh,the daughter of two academic scholars who spend more time at the museum studying Egyptology than raising their child.

Rosetta doesn't feel neglected,due to the household staff that rallies together to form a family unit around her. Her parents really don't take an active interest in Rosetta(other than hiring a governess,who turns out to be an ideal companion)until she's old enough to be put on the marriage market. One of the intriguing things about this story to me was the Upstairs,Downstairs vibe that Rosetta had with her family's servants,although she was much nicer to them than the daughter in the classic miniseries ever was: At one point,Rosetta's parents take her with them on a lecturing tour,with one of the passengers on their ship being Lucas,a wealthy and bored young man who enjoys making snide yet witty commentaries.

A bad storm hits one night,causing Rosetta and Lucas to be shipwrecked with a crewman called John Parker who is in reality Simon Perrivale,the ward of a noble family who fled the country upon being accused of murder. Simon was found over the dead body of his foster brother but insists that he didn't kill him.

With Lucas suffering from an injury to his leg,Rosetta and John/Simon wind up bonding with each other. Upon their rescue,that bond is what keeps Rosetta's resolve up as they are found by pirates. Lucas is able to buy his way home but Rosetta and Simon are sold to a Turkish lord,with Rosetta being sent straight to the quarters of his harem.

Due to their new found friendships within their new community,Rosetta and Simon are able to make escape plans but not without a bit of risk and intrigue along the way. Rosetta's particular fear is being presented to the master of the household,a fate that she and her ally in the harem do their best to avoid: 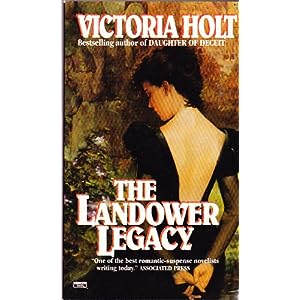 Upon returning to England,Rosetta finds purpose in life by trying to prove that Simon is innocent of murder and even takes a position as a governess in order to gather as much information as she can about the case. Eventually,Lucas is taken into her confidence and he reluctantly agrees to help,but other facts soon come to light that puts a new spin on everything.

What engages my interest in this book and The Landower Legacy is that there is more to the story than the mystery in question. In fact,the book would be interesting enough on it's own merits even if the mystery element was taken out. Granted,these books are a tad melodramatic(especially during Rosetta's time with the harem)but it's not from lack of storytelling skills.

The real mystery to me is who did the cover art for these books. I really like the look of them,with their vivid colors and elegant portrayals of the story's heroine. No mention of the artist can be found within the books themselves,which is a shame. I know that the covers did change over time,with every reissue,but their charm still lingers on:

I'm nearly done with The Captive but will wait a little longer before going on to the two remaining books in the set,The Silk Vendetta and The Road to Paradise Island(sounds like a Wonder Woman story,doesn't it?).

Not only are there other books just waiting to read on my numerous TBR piles and a couple of lengthy ones already in progress,such rich fare is best appreciated when slowly savored. Unlike Northanger Abbey's Catherine Norland, I know when to set aside a Gothic romance before my imagination gets too overwhelmed. Taken in small doses,Victoria Holt can be safely consumed and thoroughly enjoyed: