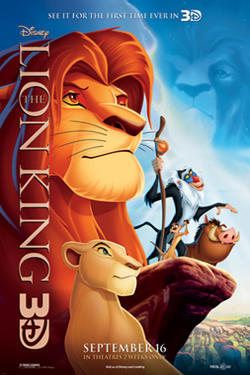 Recently,for the first time in a long while,you gave one of your classic animated movies a theatrical re-release with the addition of 3D onto the original film. This new version of The Lion King has done very well at the box office,hitting the number one spot for two weekends in a row.

Congrats to you on that and while I know that part of your motivation for doing so was to build up interest and anticipation for the new Blu-Ray edition being shipped out this week,it's still great to see a Disney re-release back in theaters again:

One of the joys of my childhood was being taken to a classic Disney animated feature by my parents and seeing such films as Lady and the Tramp,Fantasia and Cinderella on the big screen like that for the first time made me a lifelong fan.

This was a pleasure that I was able to share with my younger sister and many other of your faithful followers looked forward to introducing their kids to the wonderful world of Disney this way. These were cinematic events worth sharing and creating fond memories of:

It's been over ten years since you stopped doing this and with the rise of the home video market and cable TV,that decision is financially understandable.

However,this new reissue of The Lion King proves that people have missed seeing these films in theaters and are more than willing to prove it with their dollars. Considering the hard economic times we're in right now,that speaks volumes.

Reviving the re-release of your cherished animated films,both traditional and modern classics,sounds like a sure fire money making machine to me. It's a move both your shareholders and devoted fans would applaud.

Plus,it would initiate legions of new fans into the Disney fold and pump up interest in some of your lesser known but worth watching features(which would be great for your DVD/Blu Ray sales as well):

So,folks,the ball is in your cinematic court. One word of advice;go easy on the 3D thing. I know it's the Hollywood flavor of the month but it can lead to major mistakes that you wouldn't wish on your worst enemy there:

Lady T and the rest of the Mickey Mouseketeers
Posted by lady t at 2:07 PM