The DC 52 and the Starfire Situation 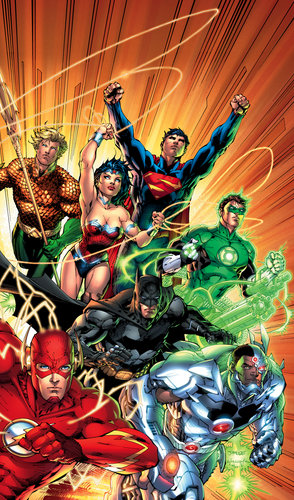 Within the past few weeks,DC Comics has relaunched many of their superhero titles with newer takes on the original back stories as well as untangling the numerous knots of old continuity from previous runs.

Called "The DC 52",this revision of even such classic characters as Batman,Superman and Wonder Woman was considered a major risk,with many retailers fearing that they would be stuck with a load of unsellable comics on their hands. However,the sales for this new line have been booming,giving everyone a strong surge of hope for the continuation of print comics.

Credit for the positive reaction by the fans has been partly given to the writers and the artists,who are key to keeping interest in these books alive:

Not all of the changes have been welcomed,however,particularly for two female characters. The new first issue of Catwoman doesn't show her face for the first two pages but there are plenty of close-ups of her butt and cleavage(and the last panel of the book shows a rooftop tryst between her and Batman that leaves nothing to the imagination).

Many will argue that Catwoman is the type of anti-heroine who is known for using sex as a weapon and that this is par for the course with her. Granted,Catwoman does keep her beauty and sexual nature as key components in her arsenal but it's only done to her advantage,not to any man's,including the Dark Knight himself. If the folks behind this new rendition don't realize that,I think they need to refresh their memory before Ms. Kyle tells them to hit the road:

What is ruffling up even more feathers is the revamp to Starfire,the space alien warrior princess from the Teen Titans series.

In this relaunch,she is now a member of Red Hood and The Outlaws,who has both a short term memory and amnesia(a condition that not even a daytime soap opera would touch with a ten foot pole these days),plus a tendency to have random meaningless sex.

I can appreciate wanting to give a sweet natured character,as Starfire is known to be,a darker edge or a more mature arch to her persona but what is the point of giving her a mind wipe and then presenting her as a fembot? Not to mention the two guys on her team who seem to be way too happy about that.

Before anyone accuses me of being a prude,let me make it clear that I remember Starfire quite well from her original comic book incarnation back in the Wolfman/Perez days and yes,she did have an intimate relationship with Robin(you even see them in bed together)but it was not exploitative in the least.

Starfire's sexuality is of a pure hearted sort,the kind that is based on love rather than desire, She's the kind of pretty girl who doesn't know that she is pretty and is more concerned about being loyal and helpful to her friends than strutting her stuff,unlike the ridiculous poses she makes in this new book.

The real shame of this is that a whole new generation of girls have gotten to know
Starfire from the Teen Titans animated series that ran from '03 to '06 and a good number of them would love to read her new adventures.

What a disappointment it is for these young ladies to be given a shallow sexist interpretation of the sweet yet resilient heroine they've come to know and love:

The big response from DC about both of these matters is basically "check the ratings,folks!" Red Hood and Catwoman are rated "T" for Teen,which is supposed to indicate mature themes but the themes are not the real problem,it's how Catwoman and especially Starfire's sexual natures are being portrayed.

What is good is that these debatable depictions are being talked about online and it's not just the women who are in an uproar. Male fans are also concerned about this and putting in their two cents as well.

Perhaps these concerns will be resolved in the upcoming issues of both titles yet that old chestnut about first impressions still holds true. I do think that DC ought to take the outrage over Catwoman and Starfire a bit more seriously,since the success
of the entire DC 52 depends strongly on the fans.

Also,it would be nice to see the superhero world evolve beyond the whole women in refrigerators/defrosted males trope. Now,that would be a real victory for all of comic book kind to celebrate: