Usually on Thursdays,I have my TV round-up post that highlights my small screen viewing but since I'll be attending NYC Comic Con tomorrow,that post will have to skip a week. (I'll be back Friday,hopefully with a CC report)

However,that doesn't mean we can't chat a bit about tonight's second season premiere of Work of Art on Bravo. When this strange little competition show began last year,many felt it was doomed to fail and some of the pieces created for the challenges certainly lived up to that promise. Yet,it drew an audience and we now have on our hands a fresh new crop of contenders planning to compete and create for our entertainment(plus a $100,000 grand prize).

So,let's check out a handful of these emerging talents and see if they'll be worth talking about around the water cooler or in an online forum by the weekend:

Yes,that is the moniker that this fella chooses to go by(real name:Morgan Phillips). He has a company called Suckadelic and most of his work involves making imitation action figures with Star Wars themes. 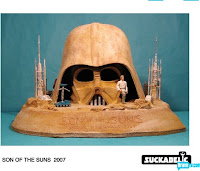 Such a pop culture friendly guy can't help but be the type that you can't help but watch and I know the producers must have been thrilled to get him into this game. He's certainly not the reclusive type,that's for sure:

Not sure if the spelling of her name is deliberate or not,but I am certain that she is a painter who has had shows in several cities and according to the official bio, her art "focuses on the human psyche and is often infused with organic elements." 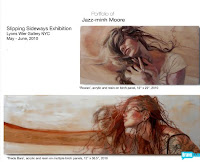 That description could mean a myriad of things but from what I've seen so far,Jazz-Minh paints both representational and abstract pieces,which may work in her favor here. More than one skill set gets called upon for the WOA challenges,so for her sake,let's hope Jazz-Minh can roll with the punches:

His dedication to art extends to teaching both elementary and college courses on the subject and Dusty's primary medium is installation pieces and sculptures. He tends heavily towards making larger items from smaller ones,such as an American flag built out of toy soldiers and firemen. 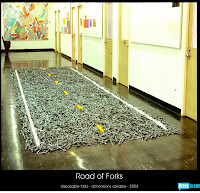 My big worry for him in this competition is time. With an eye for minute detail work,a person like Dusty might find himself in dire straits,trying to complete a project in hours that would truly take days to fully conceptualize. Then again,he may be able to edit himself,so we'll see.

There's not much information about what type of work she does in the official bio,which could mean trouble,folks. Kymia does have a number of awards and pieces showcased at top museums to her credit but she seems to be a Jill of all trades in this field. 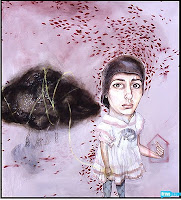 As I mentioned earlier,this could be a plus for her in the contest. On the other hand, it can be a question of "Is she so inspired that just one style isn't enough?" or "Is she so unfocused in her vision that she simply can't decide where to set up shop?"

I know that it's too soon to tell at this point and who knows,she may surprise us all. One good thing about this show is that it's hard to pick a clear winner right off the bat:

I'll see you all on Friday and please wish me luck as I go off to promote The Hench Woman's Handbook at Comic Con tomorrow. In the meanwhile,Work of Art's season two premiere should give us plenty to talk about until then: